Recently, numerous endeavors have been made in order to enhance the performance of various applications with the help of nanotechnology [1,2,3,4]. As an illustration, it is practicable to reduce system size or enhance the thermal performance of materials [5,6,7,8]. In this way, some investigations have been implemented on the use of nanotechnology in thermal applications [9,10,11,12,13,14,15,16,17,18,19]. Additionally, some studies have focused on the prediction of the thermal conductivity ratio associated with various nanofluids with the help of using experiments and artificial neural networks [20,21,22,23,24,25,26,27,28,29,30,31]. Vafaei et al. [32] predicted the thermal conductivity ratio of MgO-MWCNTs/EG hybrid nanofluids by using ANN (artificial neural network) at the temperature range of 25–50 °C. According to the results, the best performance belonged to the neural network with 12 neurons in the hidden layer. Also, an investigation has been carried out by Afrand et al. [33] to estimate the thermal conductivity of MgO/water nanofluid. Furthermore, by implementing an ANN, convective heat transfer of TiO2/water nanofluid has been studied by Esfe et al. [34]. As indicated in the results, the regression coefficient of the model for the Nusselt number’s data is 99.94%. Azizi et al. [35] employed ANN to estimate the water holdup in different layouts of oil-water two-phase flow. In another use of ANN, Azizi et al. [36] investigated the estimation of void fraction in pipes with different inclination. ANN-based methods have this potential to give high precision estimation which can be beneficial in real practice since the actual experiment is not only so expensive but also very time-consuming.
On the other hand, the sol–gel process involving hydrolysis and condensation reactions of alkali precursors is an appropriate method for the synthesis of ultra-fine metal oxide [37]. Different researchers have used the sol–gel method in different conditions. Li et al. [38] added tetra-n-butyl titanate to deionized water and hydrochloric acid or ammonia. After milling and drying the gel at different temperatures, TiO2 nanopowder was obtained. Zhang et al. [39] used the sol–gel microemulsion method. They synthesized TiO2 nanoparticles by hydrolysis of tetraizo titanium Prop Oxide with 80 Tween-Span in a microemulsion and then calcined it is at different temperatures. The results show that the particles are spherical. In some cases, the surfactant is used in the sol–gel process. Pavasupree et al. [40] synthesized semi-porous TiO2 nanoparticles by adding hydrochloride clarinylamine (LAHC) as a surfactant to the precursor solution. The resulting powders were calcined for 4 h at 400 °C. In the same way, Colon et al. [41] increased the specific surface area of the particles by adding activated carbon to the solution. The XRD results showed only the presence of the anatase phase in the powders. Li et al. [37] aged the gel for 12 h at 100 °C after drying it. The results showed that aging help to remove organic compounds and influence atomic penetration and crystalline anatase. In 2014, SiO2 nanoparticles were synthesized by Oliveira et al. They used the polypropylene matrix in their research. Their results showed that the production of inorganic nanoparticles in a polymer solution does not require solvent through the reaction in the molten phase [42]. Moreover, the influence of adding Al2O3 and TiO2 nanoparticles into the drilling mud was studied by Ghasemi et al. [43]. The size of Al2O3 and TiO2 nanoparticles were 20 and 60 nm, respectively, and a concentration of 0.05 wt. %. Based on the obtained results of temperature and pressure effects, the drilling mud rheological properties such as plastic viscosity are decreased by increasing the temperature, nonetheless, the pressure rise augments these properties. Additionally, the influences of pressure in low temperature outweighs in high temperatures. Also, the effective electrical conductivity of Al2O3 nanoparticles was experimentally measured by Ganguly et al. [44]. For examining the influences of temperature variations and volume fraction on the electrical conductivity of Al2O3 nanofluids, experiments have been carried out as a function of these parameters. As indicated in the results, the electrical conductivity increases significantly with augmenting volume fraction and temperature. Nonetheless, the effective conductivity’s reliance on the volume fraction is much higher than the temperature. Furthermore, some investigations have been intensively carried out for increasing the nanofluids’ thermal conductivity with the help of applying different kinds of nanoparticles [45,46].
The aim of this study is to investigate the thermo-physical properties of TiO2-Al2O3 nanoparticles in water that can be employed as a coolant fluid with its improved thermal properties. This is accomplished by conducting experiments on various volumes of nanoparticles in water. In this study, special attention has been paid to the temperature effect on the nanofluid’s thermal conductivity. The temperature’s influence on the thermal conductivity of TiO2 nanofluid has not been reported yet. Furthermore, the current investigation discloses the influence of temperature and nanoparticle concentrations on the thermal properties of hybrid nanofluids. With the help of the experimental results obtained by this study, researchers can acquire exceptional information regarding the displacement of nanofluid and its properties, in which appropriate theoretical models can be achieved in the future.

Synthesis of TiO2-Al2O3 Nanoparticles and Characterization

In this study, the sol–gel method was used to synthesize TiO2-Al2O3 nanoparticles prepared in various percentages of Al2O3 (10–60). Two different solution samples were prepared for this nanofluid. In the first sample, 0.1105 mol (2 g) of TiCl4 was dissolved in a solution that contains 10 mL of methyl acetate, 10 mL of ethanolamine and 100 mL of ethanol, and stirred for one hour at room temperature. Finally, a uniform suspension was produced. Then, AlCl3 was added to the solution in various weights (0–100%) and the resulting solution was stirred for one hour at 80 °C. The second sample solution was made up of 30 mL of n-hexane, 20 mL of ethanol, 4 mL of methyl acetate and 5 mL of ammonium hydroxide. The second sample was added to the first sample and the solution was mixed simultaneously to obtain the hydrogel. By adding the second sample, the viscosity of the hydrogel increased. After the addition of the sample was complete, the solution was stirred at room temperature for 48 h and then kept at room temperature for 12 h. After 12 h, with the help of water, the obtained gel was washed to remove the chloride salts and then separated solids from it. The solids were washed three times with distilled water and then placed in an oven for 3 h at 900 °C. Figure 1 shows the schematic of nanocomposite synthesis.
The preparation of nanofluid is the first step in changing the heat transfer efficiency. The preparation of nanofluid by adding the nanoparticles to the base fluid should not be considered as a solid–liquid mixture. Because the preparation of nanofluid requires special conditions. Some of these special conditions include uniform and stable suspension, aggregation of particles and the lack of change in the nature of the base fluid. Different methods are used to achieve these specific properties. Various concentrations of nanofluids are prepared by using the equation below: where and represent the nanoparticles’ density and water density, respectively. w is their mass [5].
Nanofluids that are prepared by the two-step method should be stable and the particle should not be sedimented in the fluid. Therefore, the nanofluid’s stabilization should be considered.
In this study, a magnetic stirrer was used for nanofluid stability. The agitation intensity is crucially important for the nanoparticles’ dispersion. The particles are connected to each other through bonds and the weak bonds are broken with force. However, there is a forceful propensity in nanoparticles for agglomerating because of the van der Waals force. We used the TEM analysis to evaluate the produced nanoparticles (Electro Microscopy) (PHILIPS EM 208, FEI, Hillsboro, Oregon, USA). SEM analysis was used to evaluate the morphology of synthesized nanoparticles. Figure 2 shows the SEM of pure nanoparticles and nanocomposites.
According to the above, 20% alumina and 80% titanium were selected as samples for heat transfer analysis (the main objective of this study is to improve the properties of TiO2). Therefore, adding more alumina will keep TiO2 away from its main. With the help of the TCi Thermal Conductivity analyzer made by Canada’s C-Therm, the thermal conductivity of the nanocomposite has been calculated experimentally. Also, the Brookfield Viscometer was used to measure the viscosity of prepared nanofluid. Based on the manufacturer and the obtained results, the proposed approach for measuring thermal conductivity brings an uncertainity of ±2% with the deviation of 4% for each measurement. The repeatability and accuracy of the viscometer used are ±0.2% and ±1% in the full-scale range (FSR) of measurements, respectively. One noteworthy approach in the field of thermal analysis is differential scanning calorimetry (DSC). This approach can be found in ASTM E1269. The ASTM E1269 is the standard defined procedure for measuring specific heat capacity through DSC approach. In this research, the improved modulated-DSC approach is used to obtain the specific heats. In modulated-DSC, a sinusoidal temperature fluctuation is employed instead of a linear ramp. This novel technique is capable to calculate the heat capacity and the heat flow of the samples, simultaneously.

We acknowledge the support of the German Research Foundation (DFG) and the Bauhaus-Universität Weimar within the Open-Access Publishing Programme. 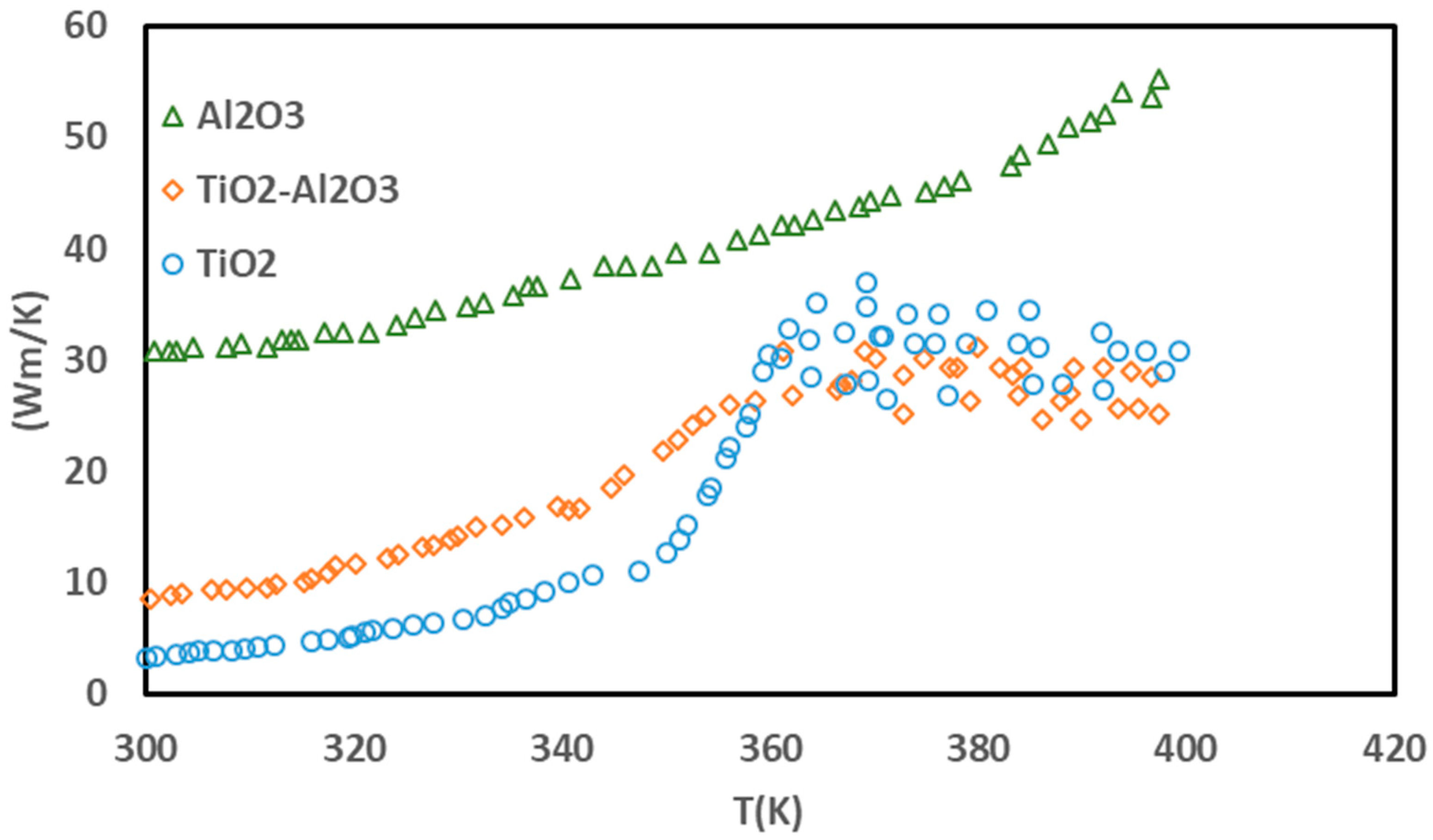 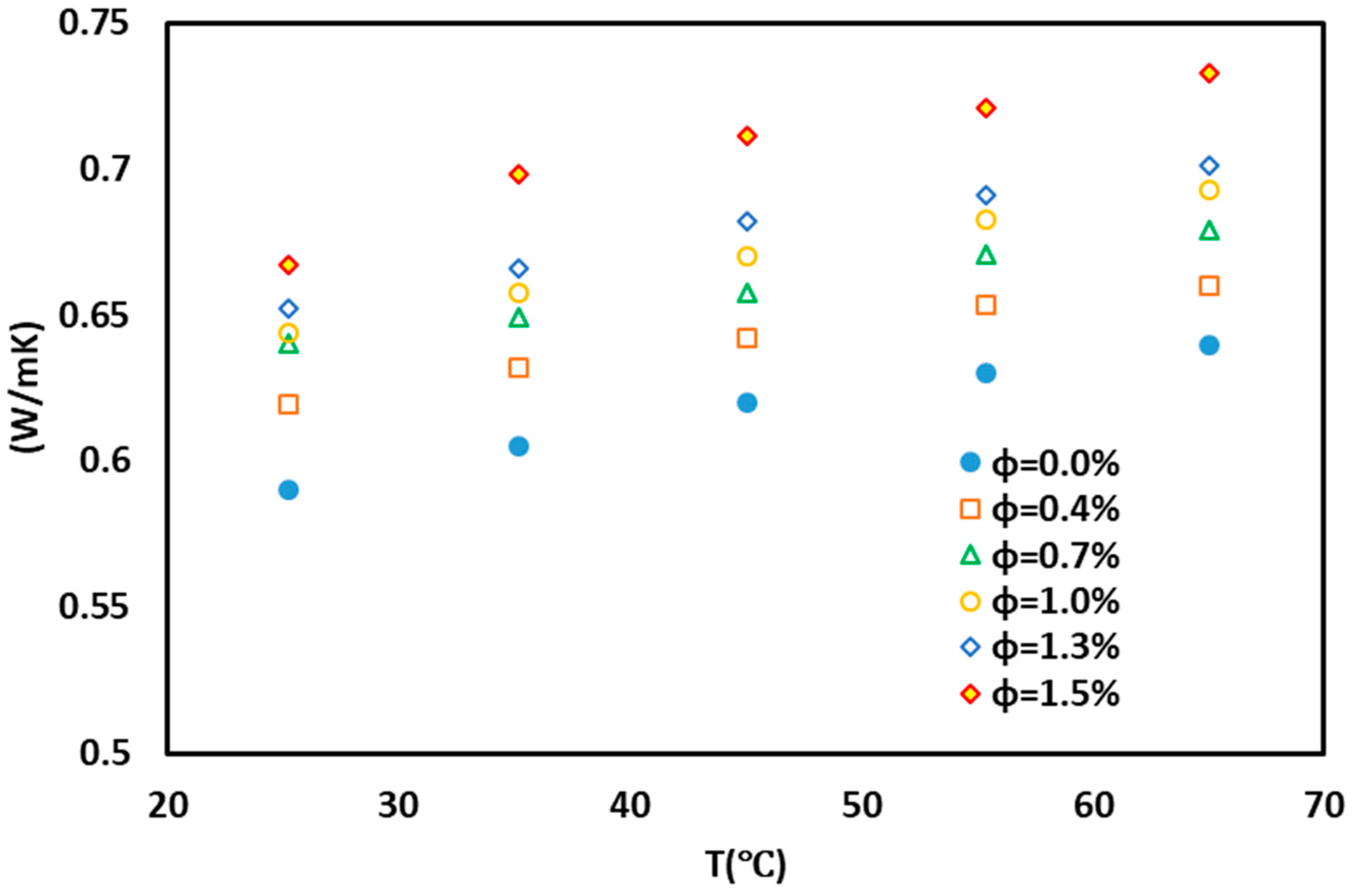 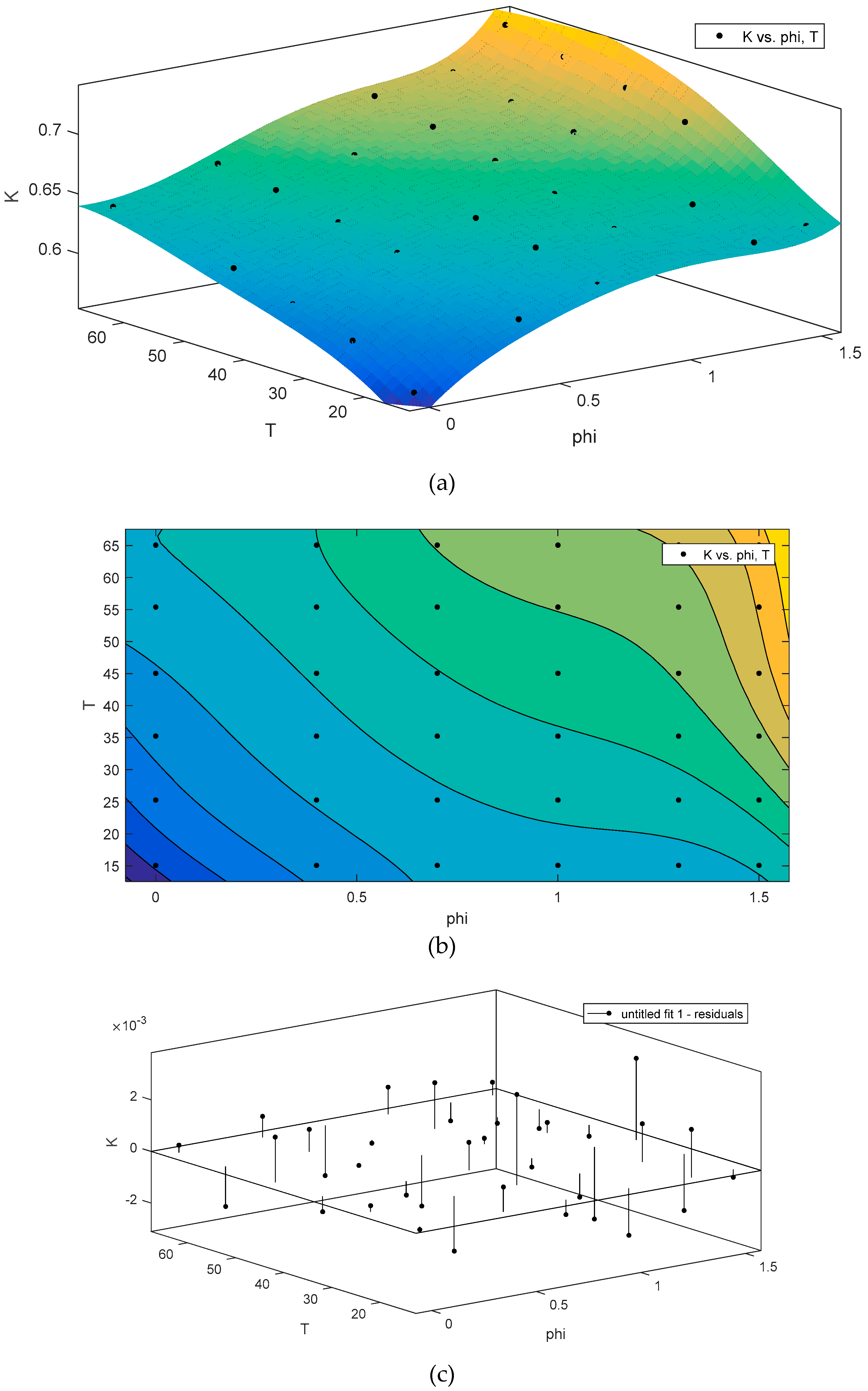 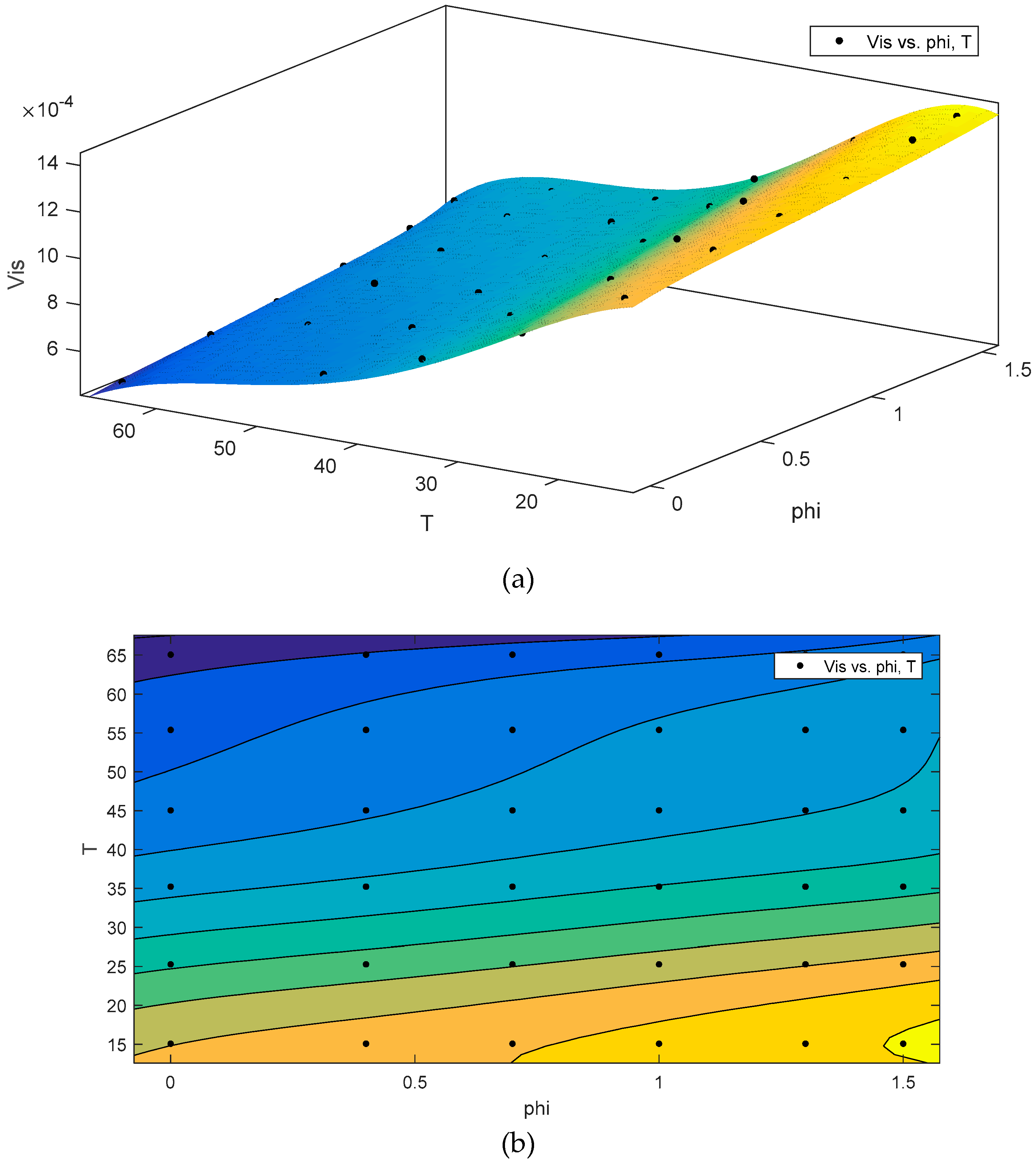 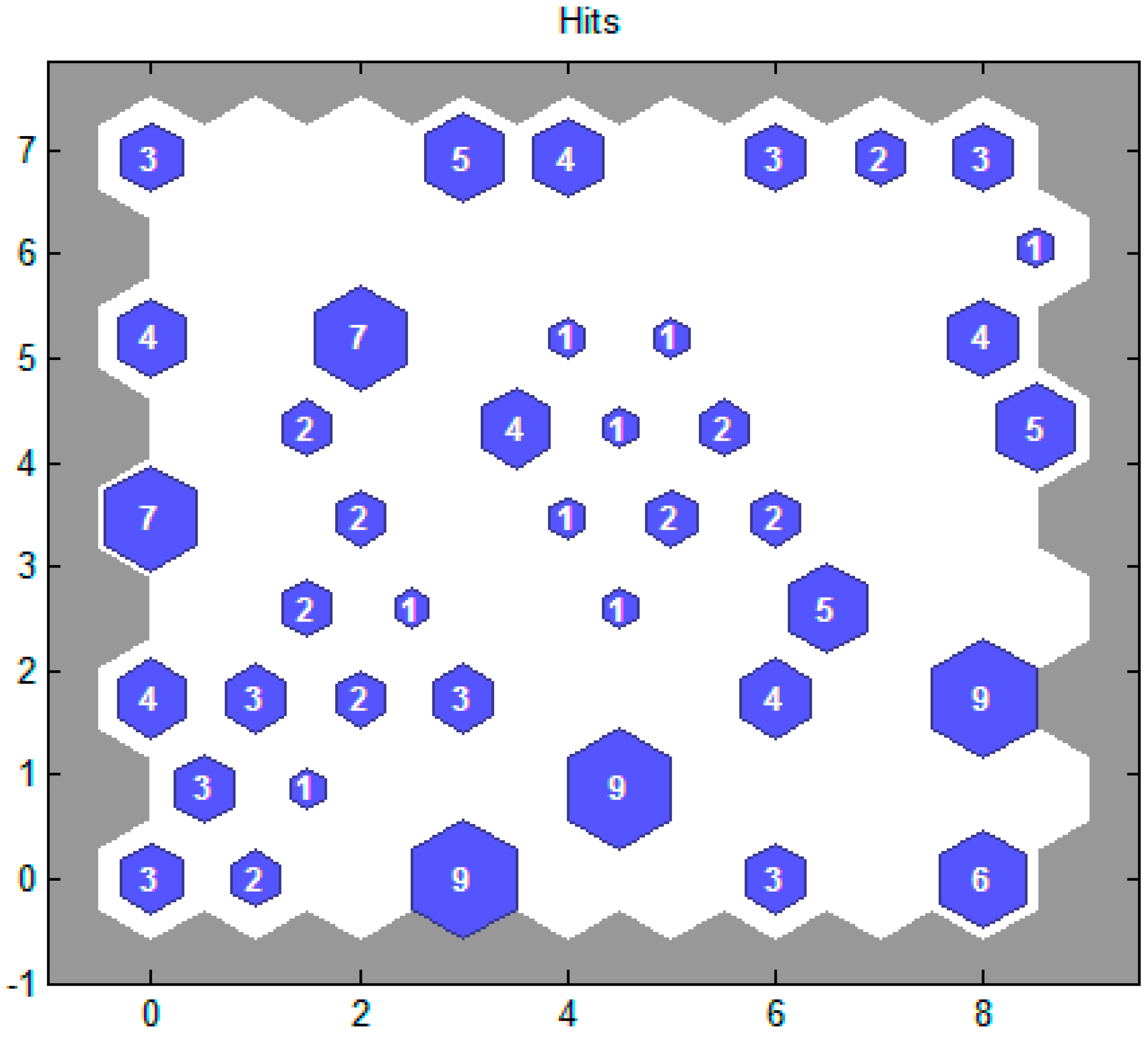 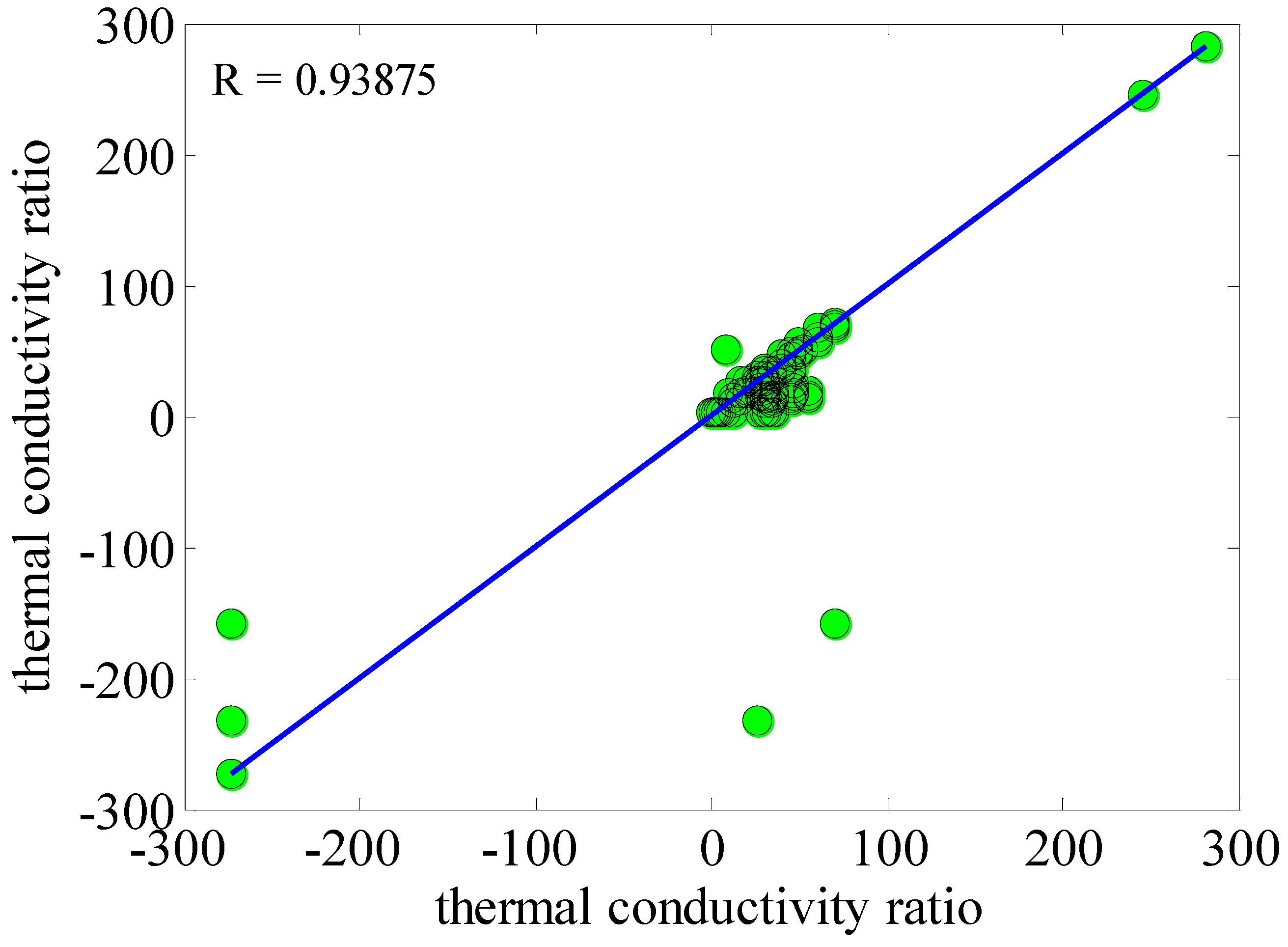