Herein, we present a new validated potentiometric method for fluoxetine (FLX) drug monitoring. The method is based on the integration of molecular imprinting polymer (MIP) beads as sensory elements with modified screen-printed solid contact ion-selective electrodes (ISEs). A multi-walled carbon nanotube (MWCNT) was used as a nanomaterial for the ion-to-electron transduction process. The prepared MIP beads depend on the use of acrylamide (AAm) and ethylene glycol dimethacrylic acid (EGDMA) as a functional monomer and cross-linker, respectively. The sensor revealed a stable response with a Nernstian slope of 58.9 ± 0.2 mV/decade and a detection limit of 2.1 × 10−6 mol/L in 10 mmol/L acetate buffer of pH 4.5. The presented miniaturized sensors revealed good selectivity towards FLX over many organic and inorganic cations, as well as some additives encountered in the pharmaceutical preparations. Repeatability, reproducibility and stability have been studied to evaluate the analytical features of the presented sensors. These sensors were successfully applied for FLX assessment in different pharmaceutical formulations collected from the Egyptian local market. The obtained results agreed well with the acceptable recovery percentage and were better than those obtained by other previously reported routine methods. View Full-Text
Keywords: Solid-contact ISEs; multi-walled carbon nanotubes (MWCNTs); fluoxetine; screen-printed electrodes; method validation Solid-contact ISEs; multi-walled carbon nanotubes (MWCNTs); fluoxetine; screen-printed electrodes; method validation
►▼ Show Figures 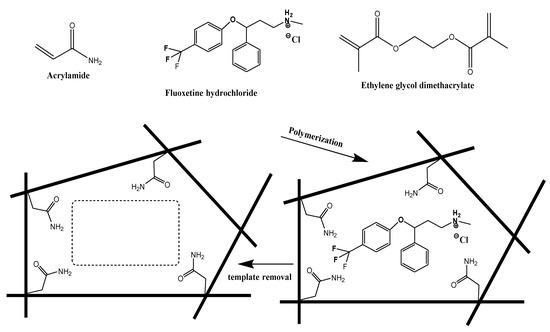