Due to its hydrophobicity, fisetin (FIS) often suffers from several limitations in terms of its applicability during the fabrication of pharmaceutical formulations. To overcome this intrinsic limitation of hydrophobicity, we demonstrate here the generation of poly (vinyl pyrrolidone) (PVP)-encapsulated FIS nanoparticles (FIS-PVP NPs) utilizing a supercritical antisolvent (SAS) method to enhance its aqueous solubility and substantial therapeutic effects. In this context, the effects of various processing and formulation parameters, including the solvent/antisolvent ratio, drug/polymer (FIS/PVP) mass ratio, and solution flow rate, on the eventual particle size as well as on distribution were investigated using a 23 factorial experimental design. Notably, the FIS/PVP mass ratio significantly affected the morphological attributes of the resultant particles. Initially, the designed constructs were characterized systematically using various techniques (e.g., chemical functionalities were examined with Fourier-transform infrared (FTIR) spectroscopy, and physical states were examined with X-ray diffraction analysis (XRD) and differential scanning calorimetry (DSC) techniques). In addition, drug release as well as cytotoxicity evaluations in vitro indicated that the nanosized polymer-coated particles showed augmented performance efficiency compared to the free drug, which was attributable to the improvement in the dissolution rate of the FIS-PVP NPs due to their small size, facilitating a higher surface area over the raw form of FIS. Our findings show that the designed SAS process-assisted nanoconstructs with augmented bioavailability, have great potential for applications in pharmaceutics. View Full-Text
Keywords: supercritical fluid technology; fisetin; nanofabrication; antitumor supercritical fluid technology; fisetin; nanofabrication; antitumor
►▼ Show Figures 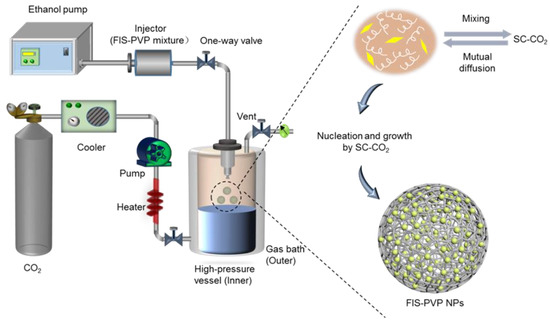