Toward Large-Scale Production of Oxidized Graphene

Graphene, a two-dimensional (2D) single atomic layer of sp2 carbon atoms [1], has attracted intense research interest, owing to its high surface area, excellent thermal and electrical properties, extended charge carrier mobility, high elastic behavior, and optical tunability [1,2,3,4,5]. Transferable single-layer graphene was first obtained by mechanical exfoliation [6] of bulk graphite and by chemical vapor deposition [7]. Although these routes produce high-quality graphene, they can be less effective for large-scale manufacturing. The major obstacle to achieving single-layer or few-layer graphene is the interlayer van der Waals interaction [8]. Keeping this consideration in mind, the most common approaches to the large-scale synthesis of graphene rely on liquid-phase exfoliation [9,10] or oxidation–reduction of graphite [11,12]. The key differences between these methods are the yield and the defect content of their products. Defect-free graphene is mostly preferred for electronic applications [13], whereas in some other cases, defects and imperfections in graphene are less relevant and desirable [14,15,16]. Some achievements have improved liquid–exfoliation processes [17,18,19] to obtain large quantities of graphene. However, the obtained graphene mainly has a hydrophobic feature and a small lateral size. Thus, the oxidation–reduction of graphite is a more practical method for bulk-scale graphene materials in immediate applications—e.g., to produce colloidal suspensions for versatile processing of thin films and composites [20,21].
Typically, the oxidation–reduction of graphite uses strong oxidizing agents to yield graphene oxide (GO), an insulating carbon material [22]. To date, the basic structure of GO remains ambiguous due to the vast number of functional groups and the entailed isomeric possibilities. It is well-known that, depending on the degree of oxidation, the aromatic lattice of graphene exhibits different oxygen functional groups, such as hydroxyl, epoxy, carboxyl, and carbonyl groups [22,23,24], which increase the interlayer spacing from 0.33 nm (graphite) to 0.87 nm (GO) [25]. At a low degree of oxidation, hydroxyl groups can chemically turn into epoxide groups and vice versa, allowing for the use of GO for specific technological applications [24]. In addition, the GO structure reveals a mixed sp2−sp3 hybridization as a direct consequence of the degree of oxidation acquired during the oxidation process [26] (see, e.g., Brodie [27], Staudenmaier [28], Hummer [29], Marcano [30], and Chen [31]). Hummer et al. reported the method most used nowadays: the oxidation of graphite is realized by treatment with KMnO4 and NaNO3 in concentrated H2SO4. This procedure involves the generation of toxic gases, such as NO2 and N2O4, and the residual Na+ and NO3− ions are difficult to remove during the processes of synthesizing and purifying GO [29,30,31]. While the induced oxygen functional groups increase the distance between graphitic layers (weakening the van der Waals forces and facilitating the preparation of GO), the removal of oxidizing agents and other impurities from GO is obtained through conventional methods such as filtration, dialysis, or sonication, making the Hummer method unsuitable for scaling at an industrial level.
To circumvent these environmental and technical issues, Chen et al. [31] have improved the Hummer method by excluding NaNO3. The authors successfully demonstrated that this modification does not decrease the yield of the product, but reduces toxic gas evolution and makes the disposal of wastewater more straightforward due to the absence of Na+ and NO3− ions [31]. Nevertheless, the obtained graphite oxide needs to be filtered and purified by dialysis for one week to remove metal ions. Additionally, the resulting graphite oxide needs to be diluted in 1.2 L of water, stirred overnight, and sonicated for 30 min to give, finally, GO powder. For large-scale applications of graphene, the filtration and dialysis are a bottleneck. These steps are time-consuming, since graphite oxide particles (especially exfoliated ones) rapidly block the filter and membrane pores. Also, the reduction process adds yet another step to the synthesis procedure, prolonging the overall production time [32]. Hence, there is a great challenge to develop a green, low-cost, and efficient reduction method.
To support this direction, Abdolhosseinzadeh et al. [33] reported a sonication-assisted oxidation method for large-scale production of GO followed by the reduction of GO with ascorbic acid before washing steps, which relatively decreased the production time of reduced graphene oxide (rGO). This method proposes the preparation of GO by the Hummer method, using a stirring–sonication process of 5 min 12 times, and an extra ultrasonication for 2 h prior to reduction. After reduction, the obtained material is sonicated for 1 h and filtrated to obtain rGO powder. Nevertheless, the procedures involving extended sonication have limited scalability using an extensive sonication time, which may induce basal/edge defects, a small lateral size, and high-cost production [34]. Recently, Garino et al. [35] reported a microwave-assisted fast synthesis of rGO co-doped with manganese and nitrogen through a green approach. The co-doping with nitrogen and manganese occurs while reducing GO.
To the best of our knowledge, a reliable method with the capability to supply the large demand for pristine GO and (undoped) rGO by using a green approach, a short-sonication time, and viable washing steps is still lacking. In this communication, such a method is presented, considering the environmental problem and technical limitations. We successfully demonstrate, through several spectroscopy and morphological studies, an eco-friendly and complete guideline protocol for large-scale production of GO by excluding NaNO3 [31] and adding citric acid (CA) after a simple washing process. The advantages of this method, with its simple protocol, preserved yield, and lack of extensive sonication and toxic gas evolution during preparation of GO, make it attractive for preparing rGO on a large scale, with promising applications in composites, energy storage, and reinforcement, where a large quantity of oxidized graphene is needed [36].

It is important to stress once more that the synthesis of GO is based on the approach of Ref. [31]. However, some obvious modifications were developed to make the process as simple as possible. In the typical experiment, 3.0 g of graphite powder was added to 70 mL of concentrated H2SO4 while stirring in an ice-water bath. Then, 9.0 g of KMnO4 were gradually added, maintaining the temperature of the suspension to be lower than 20 °C. The resulting mixture was transferred to a 50 °C oil bath and vigorously agitated for about 0.5 h. Distilled water (150 mL) was added, and the solution was stirred for 20 min at 90 °C. Additionally, 500 mL distilled water was added, followed by a slow addition of 15 mL of hydrogen peroxide (H2O2, 30%, Merk) and stirred up to turn the color of the solution from dark brown to yellowish. The resulting graphite oxide suspension was washed with 1:10 HCl solution and distilled water several times, each for 10 min by means of centrifugation at 3000 rpm until the pH was at ~6. The precipitated material was dried at 80 °C for 24 h.

Initially, 50 mg of resulting solid was dispersed in 500 mL of distilled water by sonication for 0.5 h, employing an ultrasonic bath (Branson 2510 Ultrasonic Cleaner, Framingham, MA, USA) in continuous operation. Bath sonication is preferred to tip sonication because the direct positioning of the tip in the medium results in strong material fragmentation [37]. The obtained suspension was centrifugated at 1000 rpm for 0.5 h and divided into two equal parts: one to obtain a homogenous GO suspension (Figure 1, optical images), and the other was further processed for preparing rGO. Under vigorous agitation, 250 mg CA was slowly added in the remaining suspension. Different reduction times were tested (from 0.5 to 3 h), setting the reduction temperature at 95 °C. To remove excess CA, the resultant black precipitates were washed with distilled water by centrifugation at 3000 rpm for 0.5 h. Finally, the precipitated material was dried at 80 °C overnight to obtain rGO powder.

In summary, we have established a complete and green protocol for the preparation of GO and rGO by excluding NaNO3 in the oxidation and adding CA in the reduction, which demonstrated to be an effective and inexpensive reducing agent for GO. EDS measurements showed a reduction effectivity from 0.5 to 1.5 h, while GO is in contact with CA under vigorous agitation. UV-visible spectra confirmed the reduction of GO into rGO. FTIR analysis demonstrated the presence of oxygen functional groups, which decreased in intensity after reduction. The thermal stability of rGO was found to be higher compared to GO. Raman spectra showed a high intensity of the D peak in GO, indicating the presence of basal/edge defects; however, the characteristic 2D peak of graphene arose in rGO. SEM measurements showed that the semitransparent layers were relatively free of impurities. TEM analysis presented similar features. However, rGO exhibited a more regular, transparent, and thin nanosheet. The proposed method prevents toxic gas evolution, prolonged sonication, and complicated washing steps, making it effective at preparing oxidized graphene on a large scale.

The following are available online at https://www.mdpi.com/2079-4991/10/2/279/s1, Figure S1. Optical images of rGO (black) suspensions. To obtain suspensions from rGO powder, the reduction of GO with CA was carried out considering three different times (0.5, 1.0, 1.5 h) with the procedure outlined in the main text. Then, 10 mg of rGO powder were added into 10 mL distilled water and sonicated for 30 min. The obtained suspensions were centrifugated for 30 min at 3000 rpm. Figure S2. EDS spectra of GO and rGO considering different reduction times (0.5 h, 1.0 h and 1.5 h). The carbon and oxygen elements are predominant in the range from 0 to 5 keV. Figure S3. UV-visible spectra recorded in aqueous solutions at 0.1 mg/mL of (a) GO and (b–d) rGO considering different reduction times (0.5 h, 1.0 h and 1.5 h). The intensity was normalized by the predominant peak.

R.M., C.V.G., and L.S.C. supervised the work. G.T.U. prepared the GO and rGO samples. M.G., and G.T.U. performed the EDS analysis and SEM observation. F.V., and L.S.C. conducted Raman and TEM measurements. T.T., G.T.U., M.G., and M.A. helped with the UV-vis, TGA, and IR validations. All authors contributed to the scientific discussion and manuscript preparation. T.T. and C.V.G. wrote the manuscript. All authors have read and agreed to the published version of the manuscript.

D. Colcha, J. Pilamala, P. Angamarca, and A. Nuñez, undergraduate students of Escuela Superior Politécnica de Chimborazo, as well A. Valarezo and O. Salguero, undergraduate students of Yachay Tech University, participated in this project. T.T. and C.V.G. wish to thank Escuela Superior Politécnica de Chimborazo for hospitality during the completion of this work. The authors are very thankful to H. Brito and F. Arias from the Faculty of Sciences—ESPOCH as well S. Briceño and J. Chacón-Torres from the School of Physical Sciences and Nanotechnology—Yachay Tech, for the facilities provided in the UV-vis characterization and stimulating discussions. 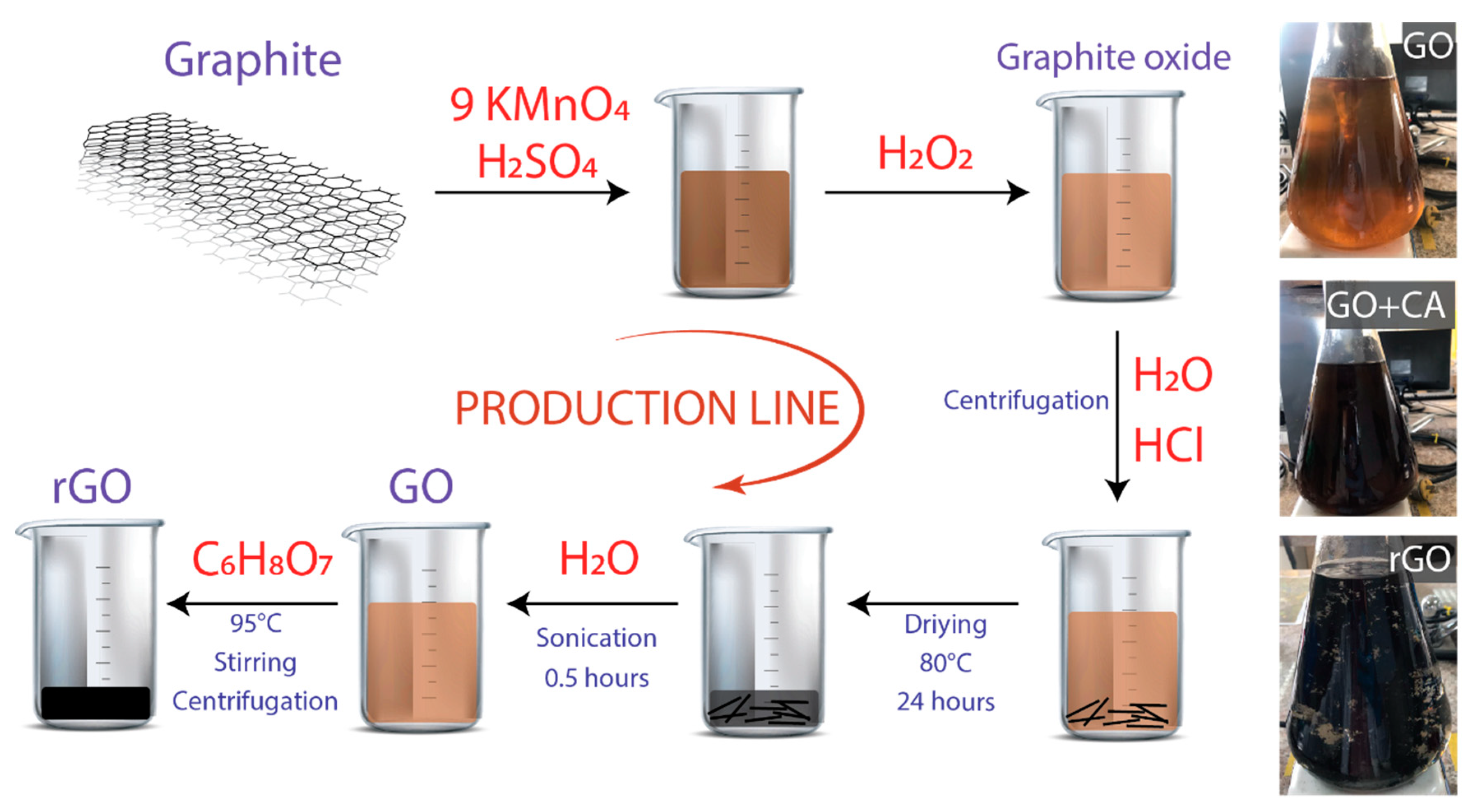 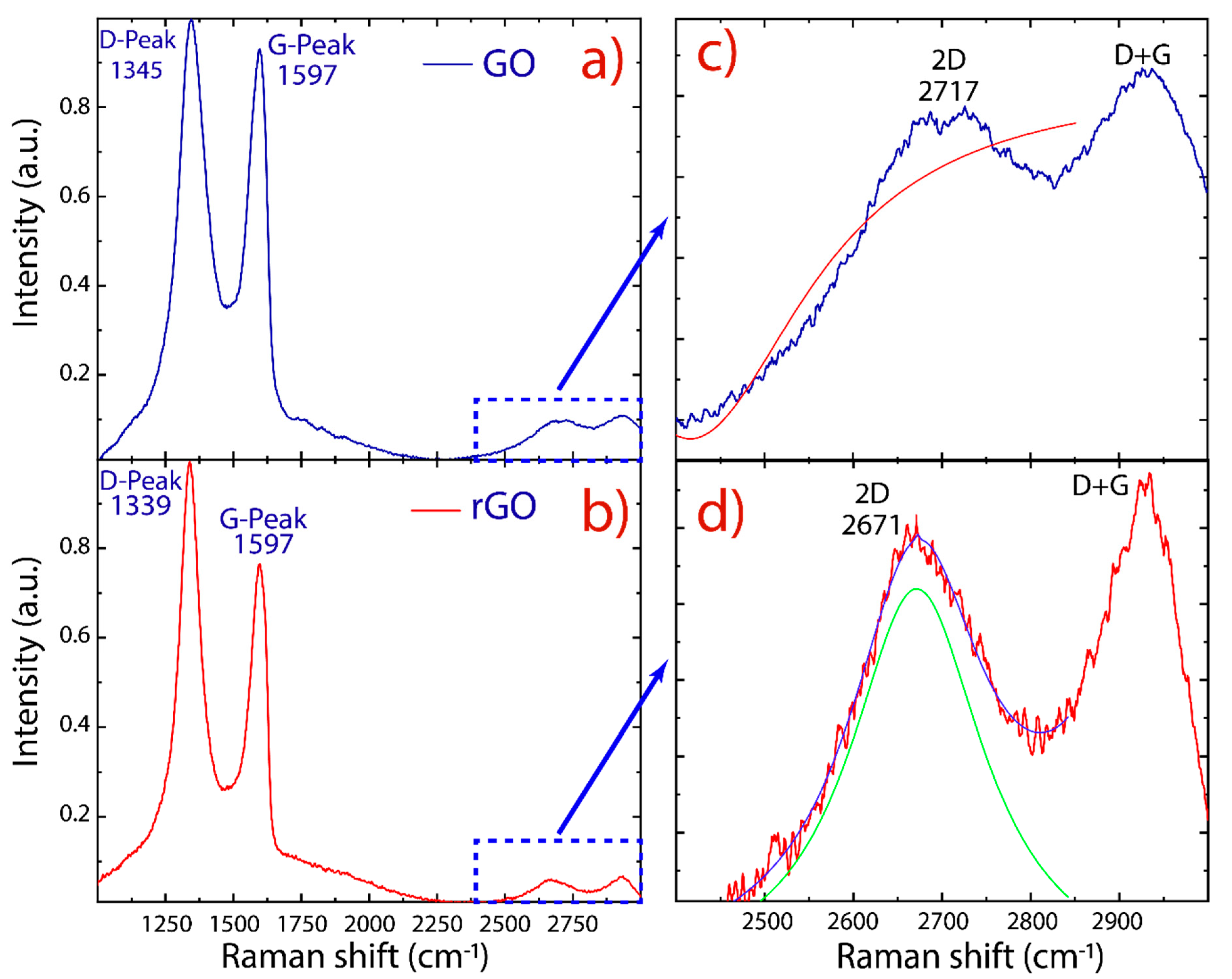 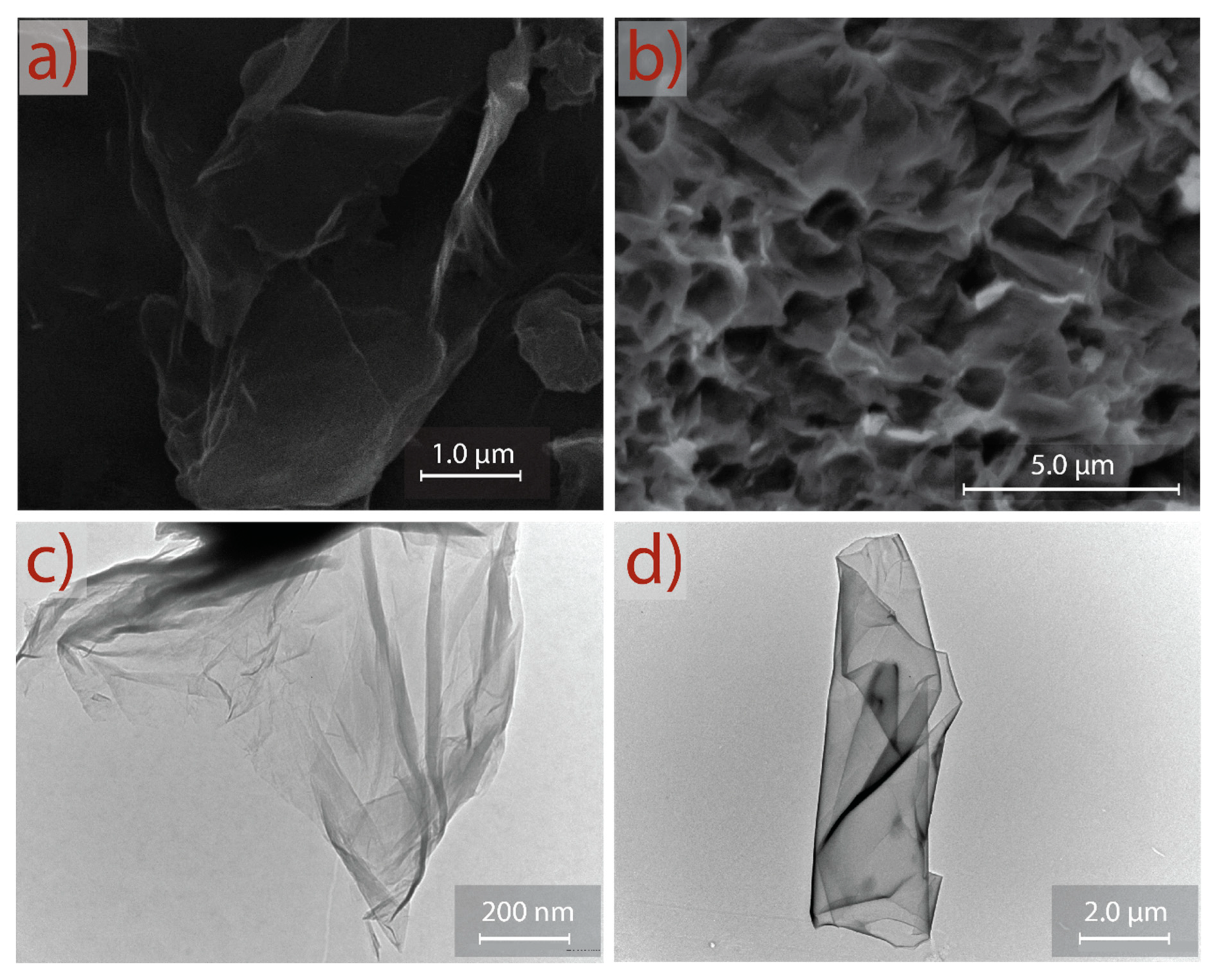