Polyol Process Coupled to Cold Plasma as a New and Efficient Nanohydride Processing Method: Nano-Ni2H as a Case Study
Previous Article in Journal

An Overview of Micro- and Nanoemulsions as Vehicles for Essential Oils: Formulation, Preparation and Stability

:
Micro/nanoscale design of composite materials enables alteration of their properties for advanced functional materials. One of the biggest challenges in material design is the controlled decoration of composite materials with the desired functional additives. This study reports on and demonstrates the homogeneous decoration of hexagonal boron nitride (hBN) on poly(methylmethacrylate) (PMMA) and vice versa. The formation of the composite materials was conducted via a low environmental load and a low-energy-consuming, electrostatic nano-assembly method which also enabled the efficient usage of nano-sized additives. The hBN/PMMA and PMMA/hBN composites were fabricated in various size combinations that exhibited percolated and layer-oriented structures, respectively. The thermal conductivity behaviors of hBN/PMMA and PMMA/hBN composites that exhibited good microstructure were compared. The results showed that microstructural design of the composites enabled the modification of their heat-conducting property. This novel work demonstrated the feasibility of fabricating heat-conductive PMMA matrix composites with controlled decoration of hBN sheets, which may provide a platform for further development of heat-conductive polymeric materials.
Keywords:
electrostatic adsorption; electrostatic assembly; composite; heat-conductive; hBN; PMMA

Polymer matrix composites with the desired properties attracted the interest of many researchers due to the significant potential for low-cost fabrication of high-performance functional polymeric materials. The composite’s properties can be changed by altering the composition of its organic or inorganic materials. Poly(methylmethacrylate) (PMMA) is a widely used polymeric material due to its unique properties such as good optical clarity, high mechanical strength, and good thermal stability. PMMA also exhibits an amorphous polymer processing dimensional stability that allows it to be used as a host in composite material fabrication [1]. Various PMMA composite materials with desired properties were reported such as functional transparent composites [2,3,4] and infrared (IR) shielding composites [5].
In the rapid development of wearable and high-power electronic devices, the requirement of effective heat-dissipating composite materials is more important than ever [6,7,8]. High-performance electronic devices tend to generate heat rapidly, making heat dissipation a key factor in a device’s design, as heat entrapment will not only affect the performance of the device but also reduce the device’s lifetime. In the electronics industry, synthetic polymers are commonly used in encapsulation, as well as for packaging materials. However, the synthetic polymeric materials used possess low thermal conductivities of 0.1–0.5 W·m−1·K−1 [9]. Therefore, the development and improvement of heat-conductive polymeric composite materials are crucial to improve the heat-dissipation of electronic devices. Recently, two-dimensional (2D) boron nitride (BN) sheets which possess good thermal conductivity, oxidation resistance, high elastic modulus, and electrical insulation were widely used as 2D micro/nano thermal conductive fillers [9,10,11]. The unique honeycomb-configured sp2-bonded boron and nitrogen promotes anisotropic thermal conductivity with in-plane and out-of-plane thermal conductivity of 600 and 30 W·m−1·K−1, respectively [12]. Due to the strong structural correlation of 2D hexagonal boron nitride (hBN) micro and nanosheets with their in-plane thermal conduction, it is imperative to maintain its structure for effective heat conduction. This makes conventional mechanical mixing methods such as mechanical mixing inappropriate as they would destroy the sheet-like structure and hamper the thermal conductivity of the composite, in addition to there being issues when mixing them [1,13]. Furthermore, a high loading amount of more than 50 vol.% is required to generate good thermal conductivity, but this compromises the composite’s mechanical property [13]. In order to preserve the sheet-like structure of hBN sheets, electrostatic nano-assembly (EA) was used in this study. Previously, our group demonstrated the feasibility of an EA method for fabricating various composite materials [14]. The composites were used for applications such as IR shielding [5], optical property-controlled ceramic composite films [15], selective laser sintering [16], mechanical property control of carbon-based alumina composite [17], and fabrication of the negative electrode for rechargeable Fe–air batteries [18]. The EA method not only allows for the homogeneous decoration of additives onto desired primary particles, but also the preservation of the shape and size of the starting materials. Moreover, compared to most reported methods for fabrication of hBN polymeric composite materials such as the chemical vapor deposition method [10], which involve high cost and energy consumption, the EA method is a facile and smart material processing method that involves low environmental load, as well as low energy consumption, which aligns with recently established sustainable development goals. As the fabrication process is carried out in an aqueous medium that is environmentally friendly, chemical contamination could be avoided. Moreover, the mixing is conducted at room temperature with minimal energy consumption compared to high-energy-consuming equipment such as mechanical ball-milling, heated roller mixing [6], and chemical vapor deposition [10]. The EA method also allows the efficient usage of the raw materials, which helps to reduce wastage due to the good recovery rate of the composites while maintaining the shape and structure of the raw materials [14].
In previous reported studies, the effects of the hBN sheet orientation, applied voltage waveform, and composite molding temperature on the electrical breakdown strength and thermal conductivities of only layer-oriented PMMA/hBN composites using hBN with large diameters of 10 and 45 µm as the primary (core) particles were investigated [19,20]. In this study, the feasibility of controlling the microstructure of the pellets using a wider size range combination of PMMA particles and hBN sheets was further demonstrated. A systematic investigation was carried out by adjusting the size of the starting materials (hBN and PMMA), and the microstructural morphologies obtained by decoration of hBN sheets on PMMA particles, and vice versa, were also tabulated. Decoration of hBN sheets onto PMMA particles led to the formation of a percolate-structured microstructure, while decoration of PMMA onto hBN sheets resulted in the formation of a layer-oriented microstructure. The correlation of composite particle assembly, microstructural formation, and heat conductivity of the aforementioned composites was evaluated using IR thermography. The hBN/PMMA composite materials possessed good potential for application as heat-dissipation materials for electronic industries. The results obtained in this work on the controlled design of hBN/PMMA composite materials could be beneficial for further development of heat-conductive polymeric materials.

The experiments were carried out using commercially available poly(methylmethacrylate) (PMMA) particles (average particle diameter of 0.3, 5, and 12 μm, Sekisui Chemical, Tokyo, Japan) and hexagonal boron nitride sheets (average particle size of 0.5 μm, Showa Denko 5, 18 μm Tokyo, Japan, Denki Kagaku, Tokyo, Japan). The polycation and polyanion used were polydiallyldimethyl ammoniumchloride (PDDA) (average molecular weight 100,000 to 200,000, Sigma-Aldrich, Missouri, United States) and polysodium styrenesulfonate (PSS) (average molecular weight 70,000, Sigma-Aldrich, Missouri, MO, United States), respectively. The surfactant used for the initial coating onto PMMA was sodium deoxycholate (SDC). After that, an alternative layer of PDDA/PSS/PDDA was coated onto PMMA to induce positive zeta-potential-modified PMMA primary particles. Similarly, for the hBN sheets, the surface charge was firstly modified using SDC, followed by PDDA and PSS, to obtain a negative zeta-potential surface. Then, the oppositely charged PMMA particles (positive) and hBN nanosheets (negative) in aqueous solution were mixed and stirred to obtain the electrostatically assembled hBN/PMMA composite particles. The coverage amount of additive particles (hBN or PMMA) on intended primary particles (PMMA or hBN) was adjusted in vol.% according to previous reported work [14].The suspension was then dried to obtain the composite powder. For the heat distribution evaluation of the hBN/PMMA composite obtained, the composite powders were pressed into pellets using a hot press with a pressure of 100 MPa at 200 °C for 15 min. Prior to pressing, 50 μL of methyl methacrylate (MMA) was added to promote the bonding of the main chain and to improve the mold-ability. The pressed pellets were then annealed at 80 °C for 15 min. Six different combinations of hBN with PMMA consisting of different sizes, as mentioned above, were fabricated for comparison. The morphological structures of the composites obtained were observed using an S-4800 field-emission scanning electron microscope (FE-SEM, Hitachi S-4800, Tokyo, Japan). For the cross-sectional observation, the composite pellets were cut into half and polished using a surface grinder prior to SEM observation. The heat distribution properties of the nanocomposite pellets were evaluated using infrared thermography (Testo corporation, Testo 881-1, Lenzkirch, Germany).

H.M., W.K.T., and A.Y. designed the study and contributed to the manuscript writing. T.K. and A.Y. carried out the experimental work. G.K. and A.M. provided technical and scientific insight for discussion. All authors have read and agreed to the published version of the manuscript.

This work was supported by the Japan Society for Promotion of Science (JSPS) KAKENHI JP18H01706, Early-Career Scientist JP18K14013, and the Kazuchika Okura Memorial Foundation.

The authors would like to acknowledge the TUT Research Promotional Research Fund for supporting the publication fee. 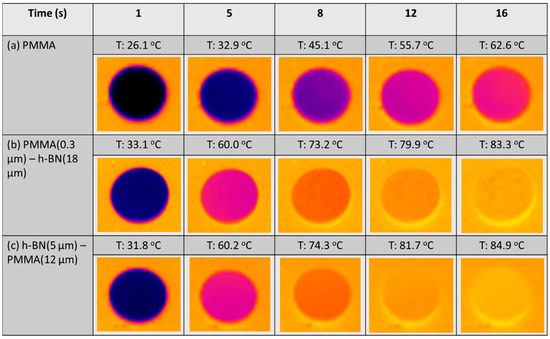 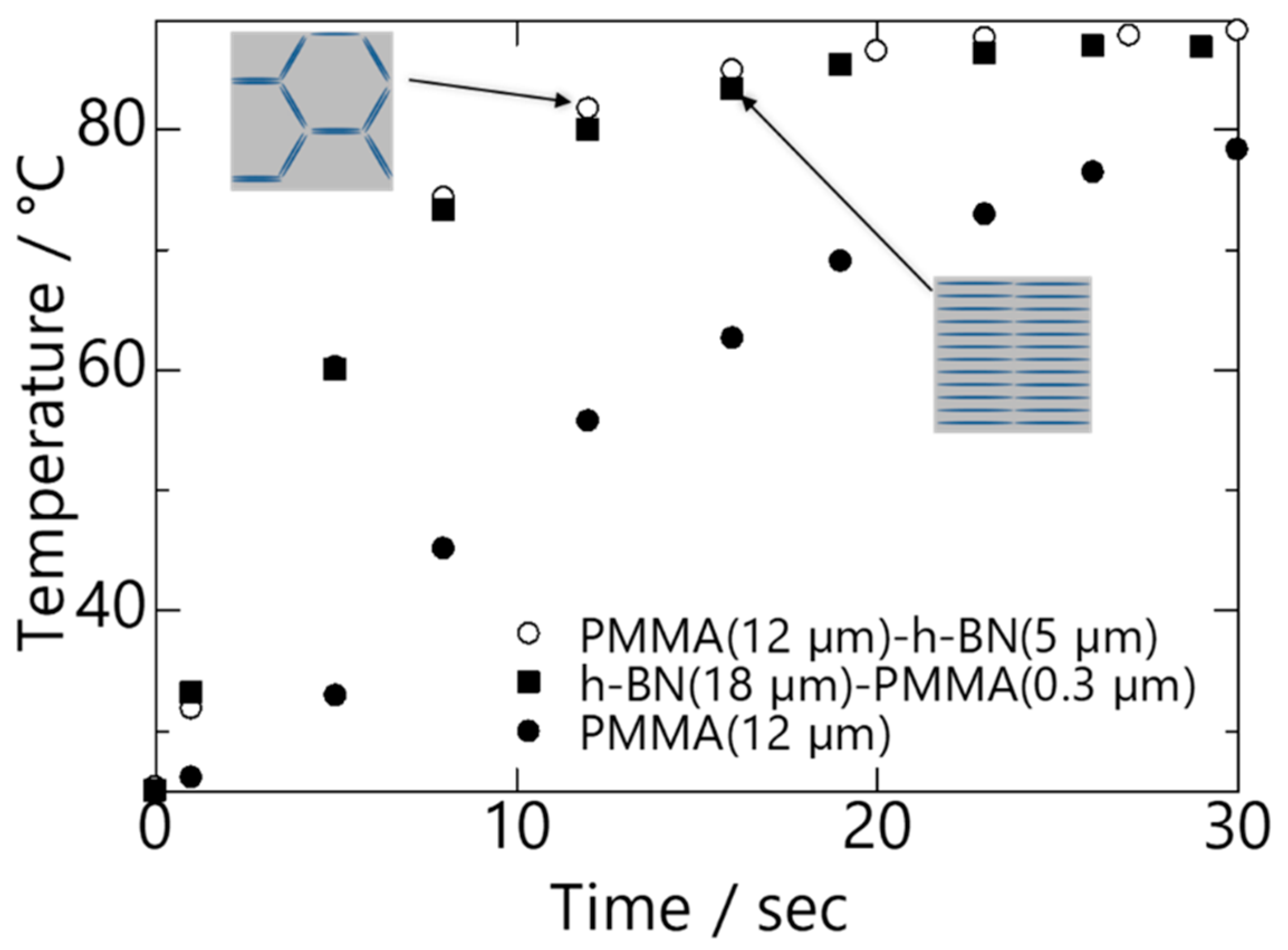