In the last decade, the use of photolithography for the fabrication of structured substrates with controlled morphological patterns that are able to interact with cells at micrometric and nanometric size scales is strongly growing. A promising simple and versatile microfabrication method is based on the physical mass transport induced by visible light in photosensitive azobenzene-containing polymers (or azopolymers). Such light-driven material transport produces a modulation of the surface of the azopolymer film, whose geometry is controlled by the intensity and the polarization distributions of the irradiated light. Herein, two anisotropic structured azopolymer films have been used as substrates to evaluate the effects of topological signals on the in vitro response of human mesenchymal stem cells (hMSCs). The light-induced substrate patterns consist of parallel microgrooves, which are produced in a spatially confined or over large-scale areas of the samples, respectively. The analysis of confocal optical images of the in vitro hMSC cells grown on the patterned films offered relevant information about cell morphology—i.e., nuclei deformation and actin filaments elongation—in relation to the geometry and the spatial extent of the structured area of substrates. The results, together with the possibility of simple, versatile, and cost-effective light-induced structuration of azopolymers, promise the successful use of these materials as anisotropic platforms to study the cell guidance mechanisms governing in vitro tissue formation. View Full-Text
Keywords: azopolymers; reconfigurable materials; cell-instructive materials; cell orientation azopolymers; reconfigurable materials; cell-instructive materials; cell orientation
►▼ Show Figures 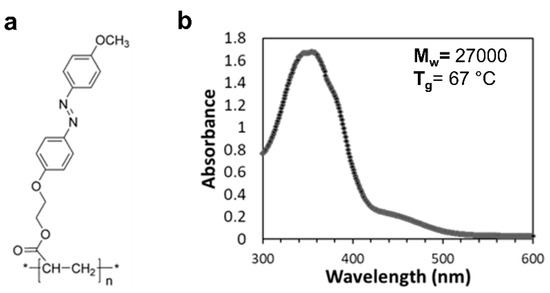