Poly(ethylene terephthalate-ethylene dilinoleate) (PET-DLA) was synthesized via a two-stage process of transesterification and polycondensation from the melt as described previously [40,41]. Briefly, the transesterification was carried out in the presence of monoethylene glycol, and dimethyl terephthalate at 180 °C, until 95% of methanol was collected. Before the polycondensation step, DLA was added to the reaction mixture, the pressure was decreased to 0.2–0.4 hPa, and the temperature was increased to 260 °C. The progress of the polycondensation reaction was followed by monitoring the power consumption of stirrer. Once a constant value of power consumption by the stirrer was observed, the material was extruded from reactor into cold water and material thread was pelletized.
The chemical structure of PET-DLA copolymer containing 40 wt.% of hard segments of ethylene terephthalate and 60 wt.% of ethylene dilinoleate is shown in Figure 9.
Detailed characterization of the PET-DLA copolymer can be found in our previous work [42], e.g., differential scanning calorimetry (DSC): Tm = 166.2 °C, Tg = −19.1 °C, degree of crystallinity of hard segments, Xc = 8%.

Microspheres were obtained via simple double emulsification process (Figure 10), based on our previous work [28], under sterile conditions. Briefly, an aqueous solution of the CPt (200 µL, 10 mg/mL) was mixed with 100 µL solution of 1% PVA in a distilled water, followed by emulsification in 1 mL of polymer solution (40 mg in 1 mL of chloroform) by drop-wise addition while magnetic stirring at 400 rpm for 2 min. This formed the primary (water/oil) emulsion. Next, the primary emulsion added drop-wise to 10 mL of 1% PVA in a distilled water, while stirring at 800 rpm over the course of 4 min, followed by 5 min of additional stirring, thus forming the secondary (water/oil/water) emulsion. Finally, the stirring was reduced to 400 rpm and the chloroform was removed by evaporation over 24 h in a fume hood at room temperature, while protected from exposure to light. After evaporation of the solvent, the resulting microspheres were centrifuged (2500 RCF for 10 min) and washed with deionized water 3 times. The resulting product was lyophilized using a laboratory freeze dryer (Christ Alpha 1–2 LD plus). Empty microspheres were prepared in the same fashion, but without addition of CPt. Lyophilized microspheres were stored refrigerated and redispersed on-demand in the desired liquid (saline, media, etc.) using a lab vortex.

To assess the morphology and determine size of obtained microspheres, a drop of freshly prepared microspheres dispersed in distilled water was placed on a microscope slide, covered with a cover slip, and imaged using optical microscope (Delta Optical IB-100) at 10× magnification. Image analysis was performed using Fiji software [43].

Carboplatin loading efficiency was determined by assaying the supernatant after initial centrifugation using SnCl2 assay [44] and comparing this un-encapsulated amount to initial amount of carboplatin (feed). Briefly, 1 mL of test solution was mixed with 1 mL of 1 mM SnCl2 in 1 N HCl and incubated for 50 min at room temperature protected from light. Carboplatin concentration was then determined by measuring absorbance at 398 nm (Jasco V-630 PC spectrophotometer) and comparing to a standard curve prepared from samples of known concentration.
To assess in vitro release of carboplatin from microspheres, ~20 mg of microspheres were dispersed in 10 mL of distilled water and transferred to a dialysis membrane with molecular MWCO cut-off (separation limit) of 6000–8000 kDa (Spectra/por 1). The dialysis membrane was then placed in a beaker filled with 30 mL of distilled water and incubated with rocking motion at 37 °C for 20 days. The release of carboplatin was monitored by assaying 1 mL samples using the SnCl2 assay, as described above. At each time point, 3 samples were collected and the appropriate volume of fresh distilled water was replaced into the breaker. The three measurements were averaged and plotted as a function of time. After the burst phase, the remaining data was fitted to a zero-order model using the lm function in R software (RStudio).

3.6. In Vitro Assessment of Microsphere Cytotoxicity and Drug Delivery

3.7. In Vivo Assessment of Drug Delivery

Female Balb C nude mice, 28 weeks old, were purchased from Anima Lab (Poznan, Poland). The use of mice and their treatment was approved by Ethical Committee for Animal Experiments decision no. 1/215, and all the experiments were carried out in strict compliance with regulations. The animals had a genetic certificate and a health certificate issued by a veterinarian. The animals were housed 6 to a cage, at the animal facility of the Pomeranian Medical University, Szczecin. The air humidity in the animal room was approx. 55%, the temperature was maintained at 22 ± 2 °C, and a 12/12 light cycle was controlled by an automated system. Before the study, all animals were weighed; their average body weight was 20.5 g. The animals were fed Labofeed H feed (protein: 22.9%, fat: 4.1%, fiber: 4.6%) for 2 weeks, with a caloric content of 35 kcal per day, while water access was ad libitum. This time served to adapt the animals to the new conditions and permit observation. All animals survived the adaptation period. The experiments were conducted with the use of pharmaceutical form of CPt (Pfizer) and suspension of microcapsules made of PET-DLA polyester microspheres containing CPt, which was released in a controlled manner. The CPt dosage was developed on the basis of available literature data [48,49]. Two groups were studied: 14 mice were given 1 mL of liquid containing 1 mg of CPt pharmaceutical formulation (10 mg/mL) via IP injection, while another 14 mice were given 1 mL of saline with a dispersion of microspheres containing the same CPt dose (~39 mg of microspheres encapsulating 1 mg CPt), also via IP injection.
All mice survived intraperitoneal administration of drugs and all 28 mice completed the study. The health and weight of all animals were monitored daily for a total of 14 days, with a pair of animals from each group sacrificed at each time point (6 h, 12 h, 1 day, 2 days, 3 days, 7 days, 14 days). Forane isoflurane (from AbbVie) was used for anesthesia and euthanasia due to its speed of action, lack of stress, and extrahepatic metabolism. Isoflurane was supplied in the form of gas to a special chamber. The chamber was prepared so that it could ensure proper distribution of gas and fast exposure of the mouse to its concentration. The animals were initially exposed to an anesthetic isoflurane dose for blood collection, followed by a lethal dose. The death of each animal was determined on the basis of cardiac arrest. In addition to blood samples, tissue samples were collected from the liver, peritoneum, ovaries, and kidney. All samples were frozen.

3.8. Release of Carboplatin In Vivo

The concentration of Pt released into plasma and tissues (liver, peritoneum, ovaries, kidney) was determined by a Shimadzu AAS 7000 spectrometer (Shimadzu, Japan) with flame atomization (F-AAS). All samples were lyophilized prior to processing (Christ Alpha 1–2).

In this work we demonstrated a double emulsion process for obtaining CPt-loaded microcapsules composed of poly(ethylene terephthalate-ethylene dilinoleate) (PET-DLA) copolymer. The obtained microcapsules were in the target size range of 10–25 µm, in order to reduce intraperitoneal clearance by phagocytosis and lymphoid transit. Importantly, empty microspheres did not exhibit toxicity in vitro. The double emulsion process yielded 2.5% w/w CPt loading and, in contrast to previous work, the obtained microcapsules exhibited long-term sustained (>20 day) zero-order release. The released CPt was confirmed to be bioavailable, as CPt-loaded microcapsules demonstrated efficacy against human ovarian adenocarcinoma (SK-OV-3) cells in vitro. Following intraperitoneal injection in mice, tissue platinum levels revealed low burst and reduced systemic uptake (plasma, kidney), as compared to neat carboplatin injection. Importantly, in contrast to previous work, we did not observe adhesions, only a mild, clinically-insignificant, local inflammatory response. Collectively, our results demonstrate the potential of the developed microencapsulation system for long-term intraperitoneal sustained release of carboplatin, as a part of ovarian anticancer therapy. The results presented here motivate further preclinical studies in animals to assess efficacy, for example in a xenograft model, focusing on ovarian cancer metastasis to the peritoneal surfaces.

The Authors thank Marta Wojtaluk (ZUT) for her involvement in generating preliminary data. 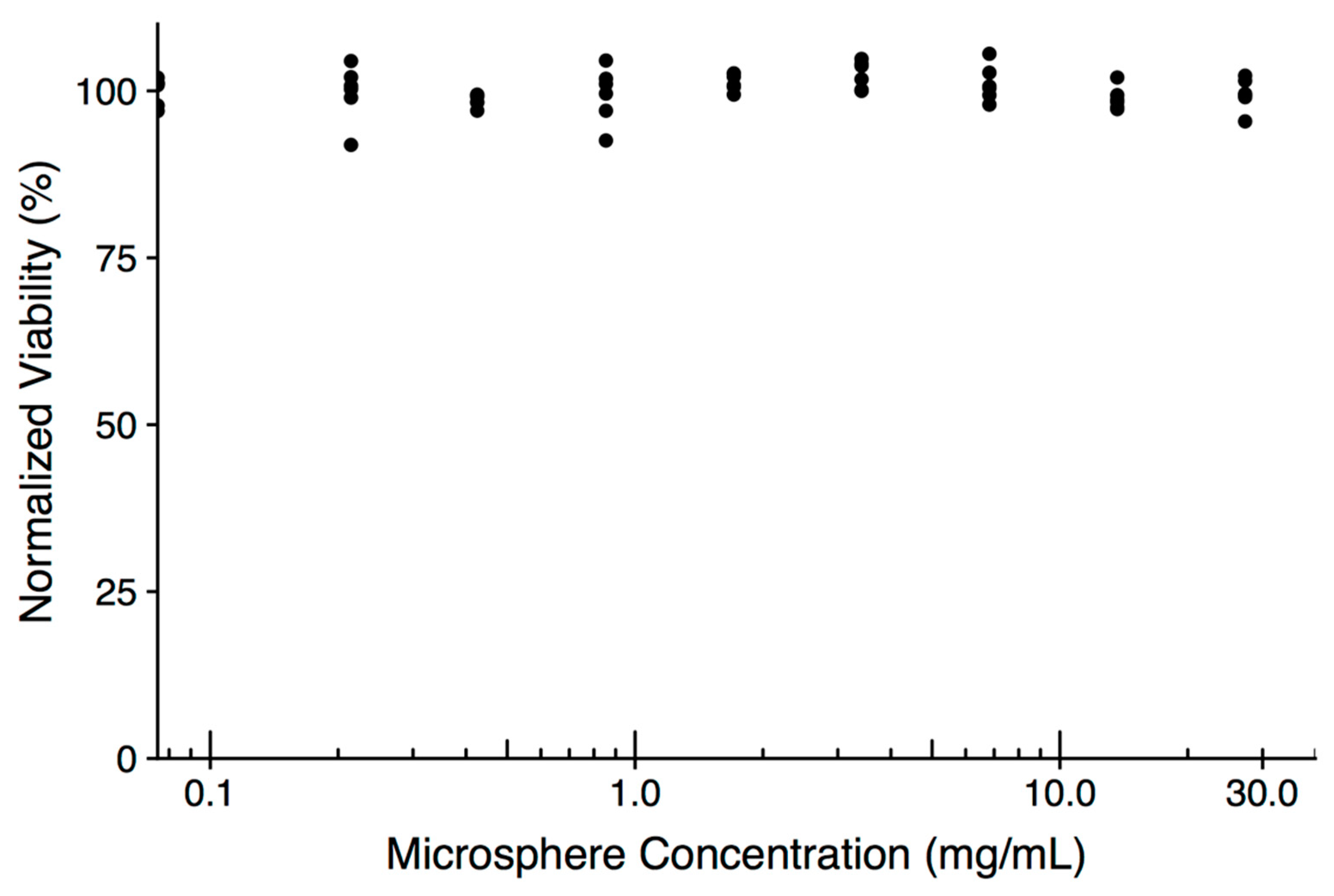 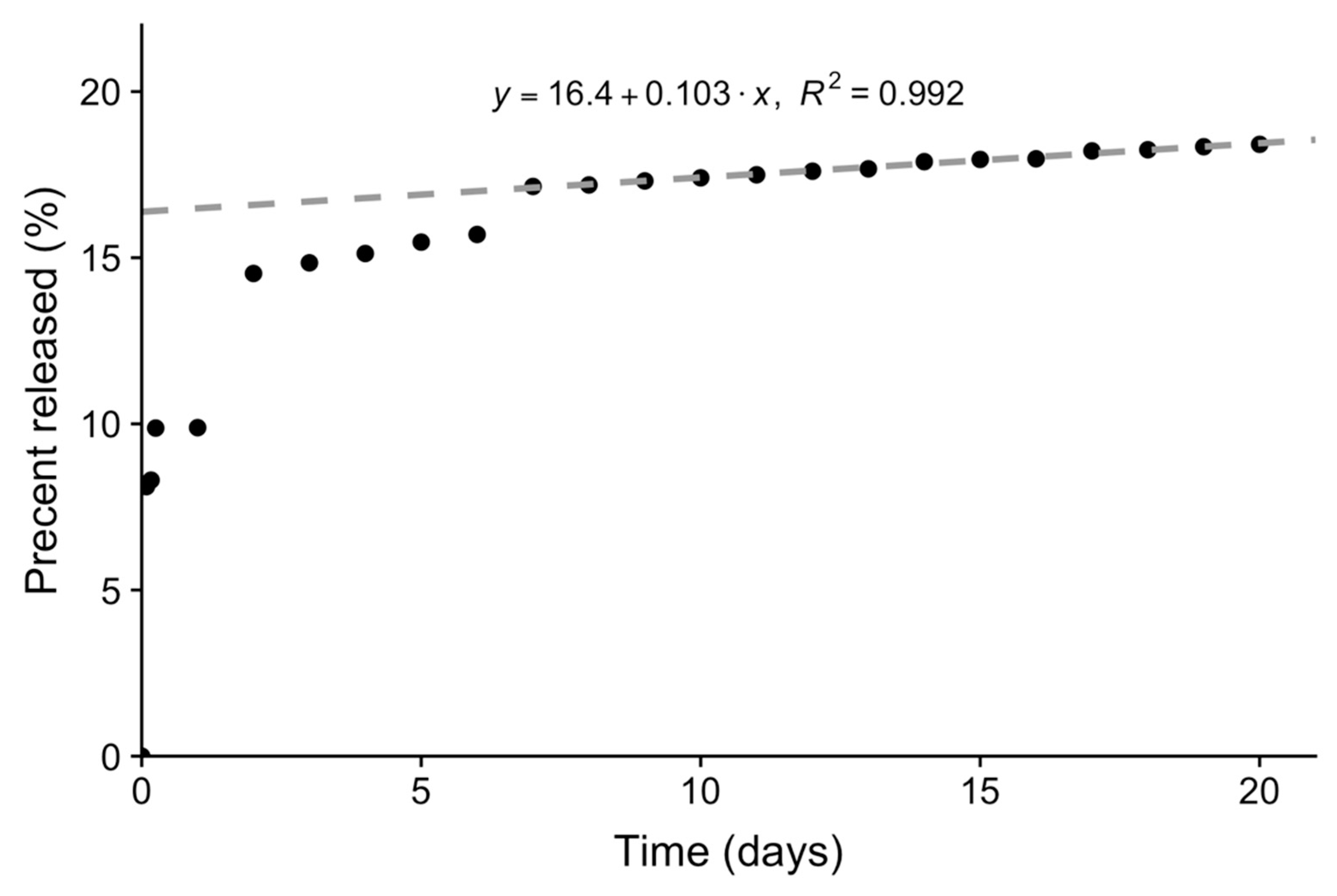 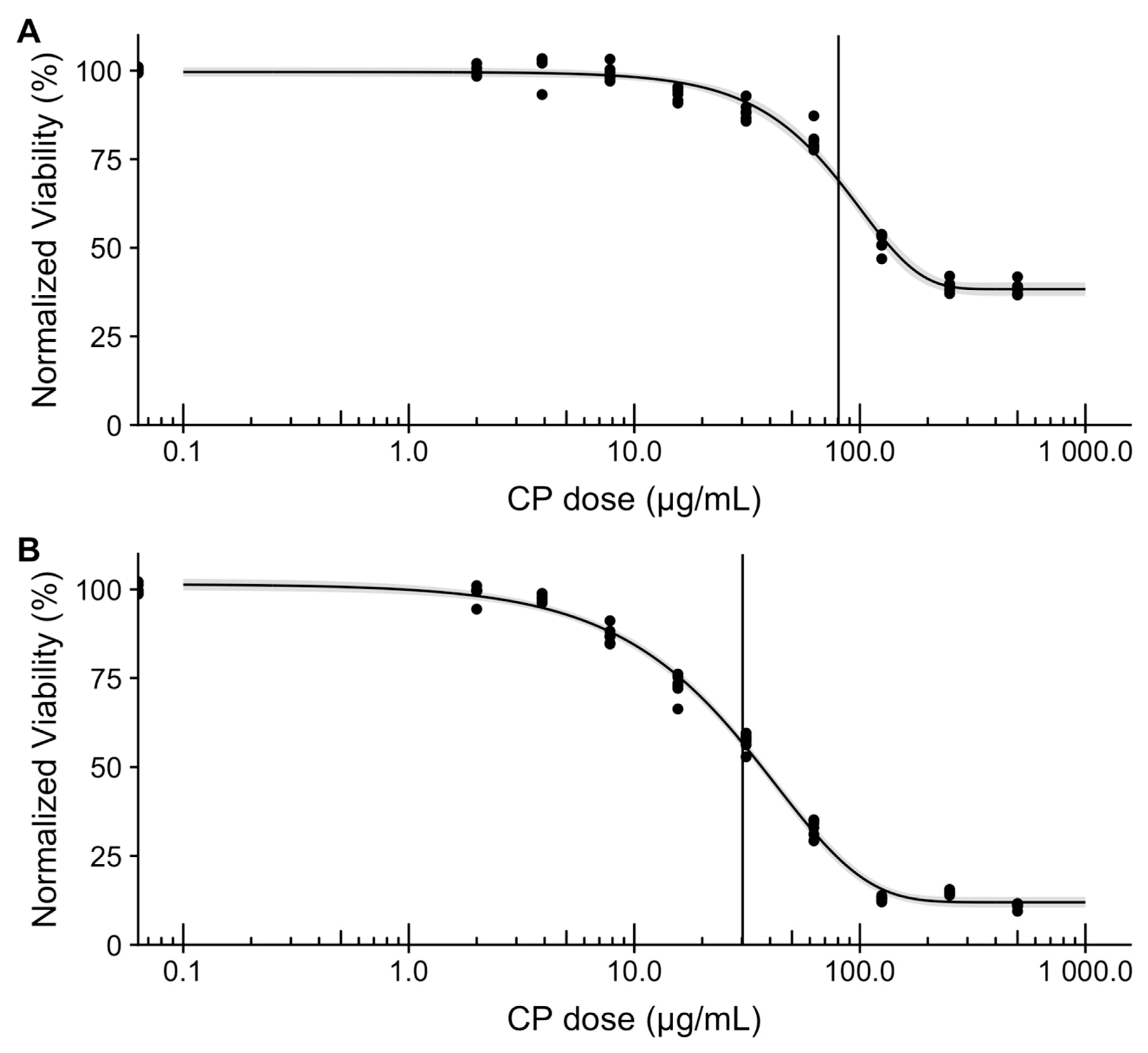 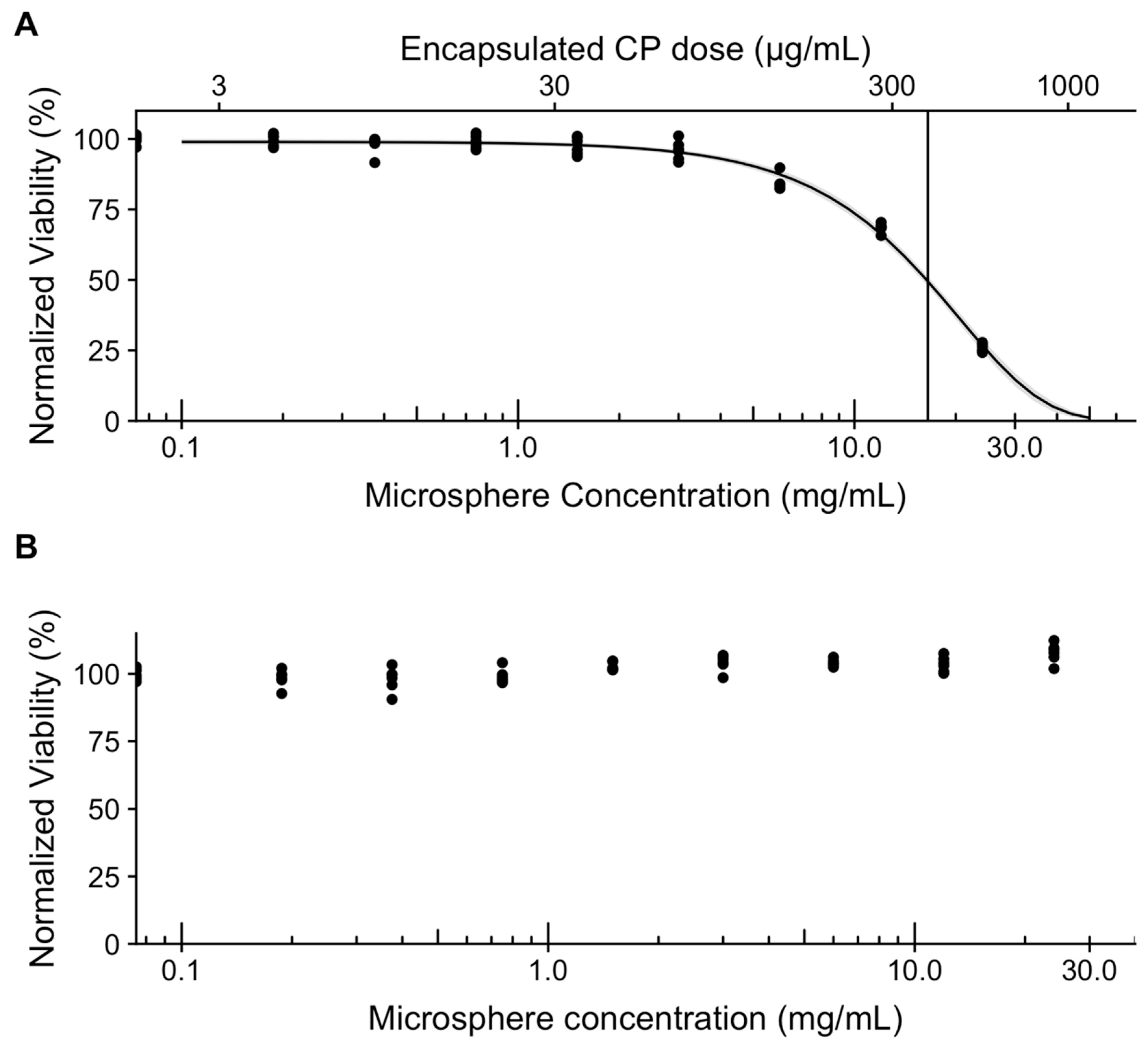