Assessment of Dental Implants with Modified Calcium-Phosphate Surface in a Multicenter, Prospective, Non-Interventional Study: Results up to 50 Months of Follow-Up

Evaluation of Osteoconduction of Biphasic Calcium Phosphate Ceramic in the Calvaria of Rats: Microscopic and Histometric Analysis

(1) Background: Evaluate the osteoconduction capability of a biphasic calcium phosphate (BCP) ceramic composed of hydroxyapatite and β-tricalcium phosphate 60%/40% in a rat model. (2) Methods: In the calvarial bone of 54 adult male rats, 7-mm diameter critical size defects were performed. The animals were randomly allocated to three experimental groups according to the type of material: blood clot (BCG), blood clot covered with a bovine-derived collagen membrane (MBCG), and BCP ceramic covered with a bovine-derived collagen membrane (BCPG). In each group, 6 animals were euthanatized at post-operative days 7, 30, and 60 for histological and histometric analysis. (3) Results: The qualitative analysis revealed the persistence of the collagen membrane at seven days, with no relevant newly bone formation in all groups. At 30 days, centripetal bone formation was observed residual particles of the biomaterial surrounded by fibroblasts noted in the BCPG. At 60 days, while BCG and MBCG showed a partial maturation with the central part of the defect populated by a fibrous connective tissue, in the BCPG the critical area was entirely occupied by newly formed bone. In the intra groups analysis was noted a significant increase in new bone formation during the experimental period (p < 0.05). At 60 days, BCPG showed a higher percentage area of new bone formation (p < 0.05). (4) Conclusion: BCP promoted a new bone formation by osteoconduction and might be considered a valid alternative in bone regeneration procedures. View Full-Text
Keywords: bone substitute; bone regeneration; biphasic calcium phosphate; ceramics bone substitute; bone regeneration; biphasic calcium phosphate; ceramics
►▼ Show Figures 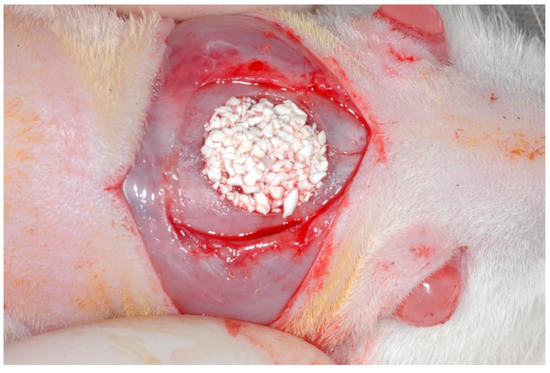