In the last few years, a number of social media e-business models including the social networking giants of Facebook, Pinterest and Instagram have offered direct purchase abilities to both their users and the involved enterprises. Hence, individuals can buy directly without having to leave the social media website. At the same time, there is a significant increase in the number of online purchases through mobile devices. To add to this, nowadays, the vast majority of internet users prefer to surf via their smartphone rather than a desktop PC. The aforementioned facts reveal the abilities and potential dynamics of Mobile Social Commerce (MSC), which is considered not only the present but also the future of e-commerce, as well as an area of prosperous academic and managerial concern. In spite of its several extant abilities and its booming future, MSC has been little examined until now. Therefore, this study aims to determine the factors that impact smartphone users’ behavioral intention to adopt direct purchases through social media apps in a country where these kinds of m-services are not yet available. In specific, it extends the well-established Unified Theory of Acceptance and Use of Technology (UTAUT) model with the main ICT facilitators (i.e., convenience, reward and security) and inhibitors (i.e., risk and anxiety). The suggested conceptual model aims to increase the understanding on the topic and strengthen the importance of this major type of MSC. Convenience sampling was applied to gather the data and Structural Equation Modeling (SEM) was then performed to investigate the research hypotheses of the proposed conceptual model. The results show that performance expectancy exerts a positive impact on behavioral intention. Furthermore, all ICT facilitators examined do impact significantly on smartphone users’ decision to adopt direct mobile purchases through social media apps, whereas anxiety exerts a negative effect. View Full-Text
Keywords: mobile social commerce; social media apps; direct m-purchases; adoption intention; UTAUT; ICT inhibitors; ICT facilitators mobile social commerce; social media apps; direct m-purchases; adoption intention; UTAUT; ICT inhibitors; ICT facilitators
►▼ Show Figures 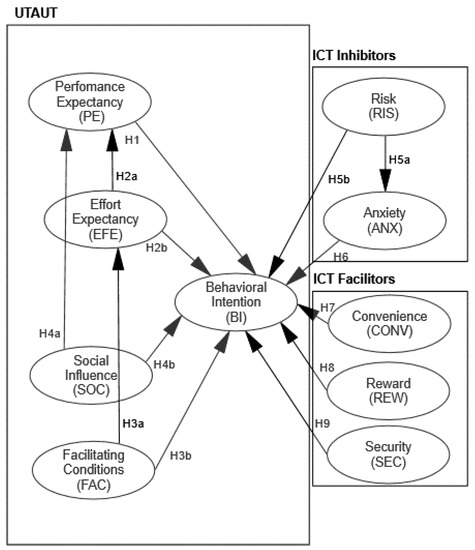 Vaggelis Saprikis
Vaggelis Saprikis is Assistant Professor in e-Business in the Department of Management Science and Technology, University of Western Macedonia, Greece. He holds a bachelor degree in Applied Informatics from the University of Macedonia, Greece. He received his Master’s Degree in Information Systems and his PhD in the ﬁeld of B2B e-marketplaces from the same university. His professional expertise, research, and teaching interests include: electronic commerce, e-business, m-commerce, e-marketing and information systems. He has published more than fifty papers in scientiﬁc journals and conferences and has received more than 500 citations for his work. He has also participated in five research programs.

Giorgos Avlogiaris
Giorgos Avlogiaris is an Assistant Professor in Statistics in the Department of Statistics and Insurance Science, University of Western Macedonia, Greece. He graduated from the Department of Mathematics, University of Ioannina, Greece and completed his MSc in Statistics and Operational Research in the same university. He also received his PhD title in Statistics from the same university. His research, academic and professional work focuses on statistical information theory, multivariate statistics, parametric statistical inference, measures of association and dependence and statistical distributions. He has already published various papers in international journals and conferences.
Zoom | Orient | As Lines | As Sticks | As Cartoon | As Surface | Previous Scene | Next Scene
We use cookies on our website to ensure you get the best experience. Read more about our cookies here.
Accept
We have just recently launched a new version of our website. Help us to further improve by taking part in this short 5 minute survey here. here.
Never show this again