:
On the brink of sophisticated generations of mobile starting with the fifth-generation (5G) and moving on to the future mobile technologies, the necessity for developing the wireless telecommunications waveform is extremely required. The main reason beyond this is to support the future digital lifestyle that tends principally to maximize wireless channel capacity and number of connected users. In this paper, the upgraded design of the multi-carrier orthogonal generalized frequency division multiplexing (OGFDM) that aims to enlarge the number of mobile subscribers yet sustaining each one with a high transmission capacity is presented, explored, and evaluated. The expanded multi-carrier OGFDM can improve the performance of the future wireless network that targets equally the broad sharing operation (scalability) and elevated transmission rate. From a spectrum perspective, the upgraded OGFDM can manipulate the side effect of the increased number of network subscribers on the transmission bit-rate for each frequency subcarrier. This primarily can be achieved by utilizing the developed OGFDM features, like acceleration ability, filter orthogonality, interference avoidance, subcarrier scalability, and flexible bit loading. Consequently, the introduced OGFDM can supply lower latency, better BW efficiency, higher robustness, wider sharing, and more resilient bit loading than the current waveform. To highlight the main advantages of the proposed OGFDM, the system performance is compared with the initial design of the multicarrier OGFDM side by side with the 5G waveform generalized frequency division multiplexing (GFDM). The experimented results show that by moving from both the conventional OGFDM and GFDM with 4 GHz to the advanced OGFDM with 6 GHz, the gained channel capacity is improved. Because of the efficient use of Hilbert filters and improved rate of sampling acceleration, the upgraded system can gain about 3 dB and 1.5 dB increments in relative to the OGFDM and GFDM respectively. This, as a result, can maximize mainly the overall channel capacity of the enhanced OGFDM, which in turn can raise the bit-rate of each user in the mobile network. In addition, by employing the OGFDM with the dual oversampling, the achieved channel capacity in worst transmission condition is increased to around six and twelve times relative to the OGFDM and GFDM with the normal oversampling. Furthermore, applying the promoted OGFDM with the adaptive modulation comes up with maximizing the overall channel capacity up to around 1.66 dB and 3.32 dB compared to the initial OGFDM and GFDM respectively. A MATLAB simulation is applied to evaluate the transmission performance in terms of the channel capacity and the bit error rate (BER) in an electrical back-to-back wireless transmission system.
Keywords:
orthogonal generalized frequency division multiplexing; generalized frequency division multiplexing; Hilbert filter; oversampling factor; adaptive modulation; future mobile waveforms; wireless networks; physical layer; bit error rate

The upcoming generations of mobile networks tend broadly to keep up the growing requirements of future transmission [1]. This is, therefore, motivating the wireless research community to investigate new techniques for accommodating the key predicated scenarios of modern wireless networks like the bit-pipe communication [2], machine type communication [3], tactile Internet [4], and wireless regional area network [5]. From the physical layer (PHY) perspective, the currently employed orthogonal frequency division multiplexing (OFDM) waveform cannot be able to achieve the future mobile market demands [6]. This mainly results from some significant issues with the OFDM design that makes waveform suffers from the out of band emission, high peak to average power ratio, frequency offset sensitivity, and partially lost bandwidth (BW) [7].
As a result, filtered candidate waveforms with developed features have been introduced recently for the next generations of mobile. For example, the filter bank multi-carrier (FBMC) [8], the universal filter multi-carrier (UFMC) [9], the filtered OFDM (F-OFDM) [10], and the generalized frequency division multiplexing (GFDM) [11]. Consequently, the forthcoming generation of mobile networks can be described as a filtration era. For more clarification, the digital filtration has been applied on different levels of subcarrier allocation. Thus, waveform developers have utilized the filtration either for each orthogonal subcarrier as in the FBMC [12], or for each fixed group of orthogonal subcarriers like in the UFMC [13], or for each flexible group of orthogonal subcarriers as in the F-OFDM [14]. Furthermore, because of the confliction between the employed digital filters and the orthogonal subcarriers, the filtration is applied for each un-orthogonal subcarrier like in the GFDM that has been considered recently for the 5G mobile networks [15]. However, because of removing the orthogonality with the GFDM waveform, the BW efficiency has been influenced severely.
To address this problem, lately, a single carrier candidate waveform named as orthogonal generalized frequency division multiplexing (OGFDM) is proposed [16]. The presented waveform has obtained the orthogonality for the un-orthogonal subcarriers of a single frequency center (fc) of the GFDM. This, as such, comes up with achieving the orthogonality in the filtration level rather than the subcarriers level. The core idea beyond these advanced filters is the phase change which makes them executed simultaneously. As a result, the developed Hilbert filters can be considered as an emerging solution for the degraded BW efficiency of the GFDM.
From the single carrier transmission perspective, the introduced OGFDM doubled the wireless channel capacity of mobile in comparison with the GFDM [16]. Nevertheless, the single carrier scenario cannot be recommended for the higher wireless channel capacity of future mobile communication (Gb/s). The main reason beyond this is the single carrier with a high transmission rate can be higher impacted by the inter-symbol interference than the low bit-rate since the maximum expected delay of spread is higher than the specified time for each symbol duration [17]. Thus, the system performance in terms of the channel capacity and bit error rate (BER) can be highly influenced by the utilized way of channel participation. To mitigate such an issue, very recently, the single carrier of the OGFDM has been promoted to the multi-carrier system [18]. The preliminary multi-carrier OGFDM has been launched, as the first stage, with sixteen filtered subcarriers and a sampling frequency is equivalent to 4 GHz.
In this paper, an extended version of the multi-carrier OGFDM with a double number of filtered subcarriers (thirty-two) and enlarged size of the FDAC equals to 6 GHz is experimentally demonstrated. The developed design of the OGFDM with the multi-carrier system involves five important levels of processing which are known as the acceleration level, filtration level, oversampling level, allocation level, and modulation level.
Regarding the acceleration level, the upgraded design of the OGFDM is extra accelerated to provide a wider BW usage and better transmission rate than the initial OGFDM. Concerning the filtration level, the advanced Hilbert filters [19] are applied proficiently on the multi-carrier system ensuring an orthogonal transmission with the upgraded design of the OGFDM. As regards to the oversampling level, the flexible oversampling process [20] is adopted to accommodate any probable interference among the increased filters, that in turns can improve the attained BW efficiency. Relating to the allocation level, a dual number of frequency subcarriers are utilized to extend the scalability of the mobile network. About the modulation level, the adaptive modulation scheme [21] is widely utilized with the progressive multi-carrier OGFDM system to achieve an extra enhancement for the capacity of the transmission channel. Hence, depending on the transmission conditions, the frequency subcarrier with the resilient modulation scheme can be reused in a more efficient way than the fixed modulation system [22].
The performance in terms of the channel capacity and the BER of the promoted OGFDM waveform is fundamentally deliberated in the PHY of an electrical back-to-back wireless transmission system. The rest of the paper is organized as follows: Section 2 discusses the key concepts of the proposed system physically and mathematically. Section 3 evaluates experimentally the system performance utilizing a MATLAB simulation. Section 4 summarizes the outlines of the paper.

In this paper, extended version of the multi-carrier OGFDM system with 32 frequency subcarriers and sampling frequency equals to 6 GHz is proposed, examined, and evaluated. The developed scheme can further support a wider number of mobile network users and a higher overall channel capacity than the initial multi-carrier OGFDM. Experimentally speaking, the upgraded OGFDM has five levels of manipulation (acceleration, filtration, oversampling, allocation, and modulation) that directly impacts the performance of the transmission system. Because of the close bonding between the acceleration and filtration levels, the experiment shows 1.5 dB and 3 dB improvements via moving from the preliminary OGFDM and GFDM to the developed OGFDM. In the oversampling level, mainly at the bad transmission conditions, the channel capacity of the OGFDM with the proposed dual sampling (DOV) far outweigh the transmission capacity of the OGFDM and GFDM at normal sampling (NOV) by around 6 dB and 12 dB respectively. However, at good transmission cases, the findings indicate that by using the NOV with the promoted OGFDM, the recorded bit-rate can be better than the transmission rate of the OGFDM and GFDM with the DOV by about 2.6 dB and 5.25 dB correspondingly. As a result, the hybrid solution (normal and dual) is recommended with the advanced OGFDM to extremely support the high channel capacity at good and bad transmission conditions. In the allocation and the modulation levels, the results declare that the improved OGFDM can achieve around 1.66 dB and 3.32 dB gains in comparison with the initial OGFDM and GFDM. By improving the overall channel capacity of the upgraded OGFDM, a good transmission bit rate can be supplied for each subscriber in the mobile network. 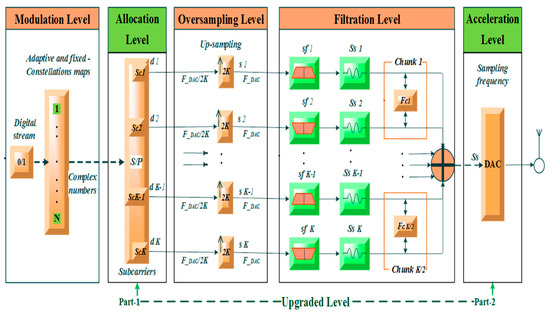 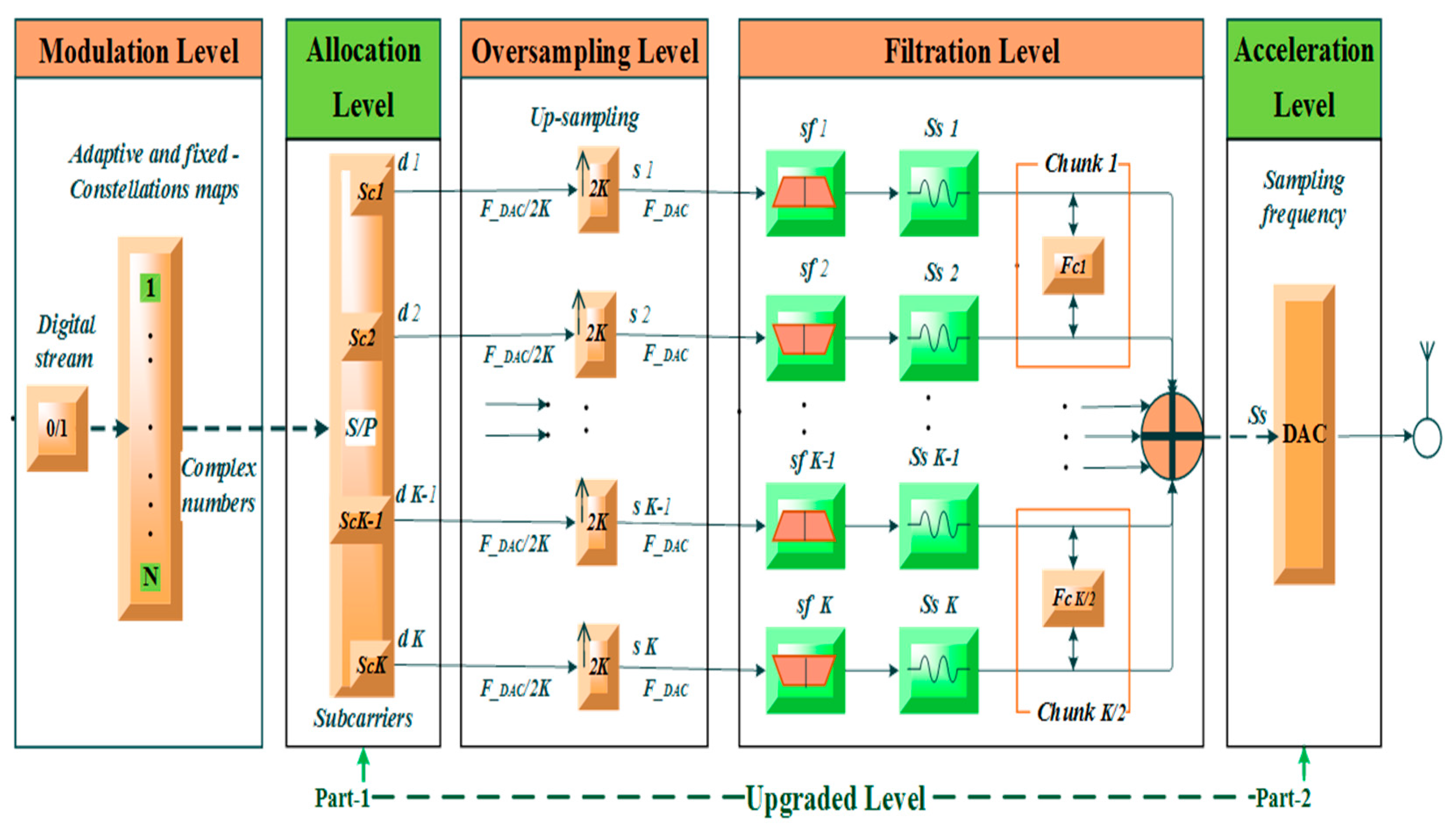 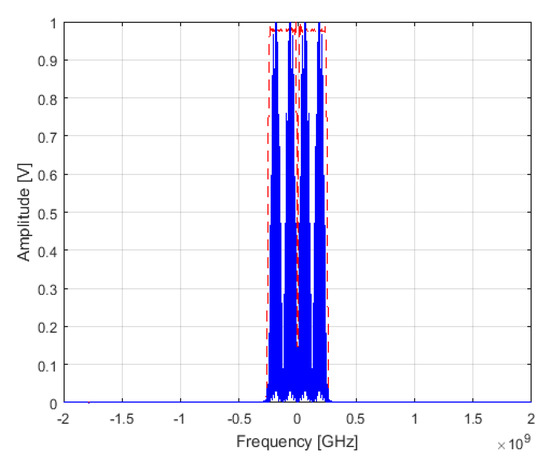 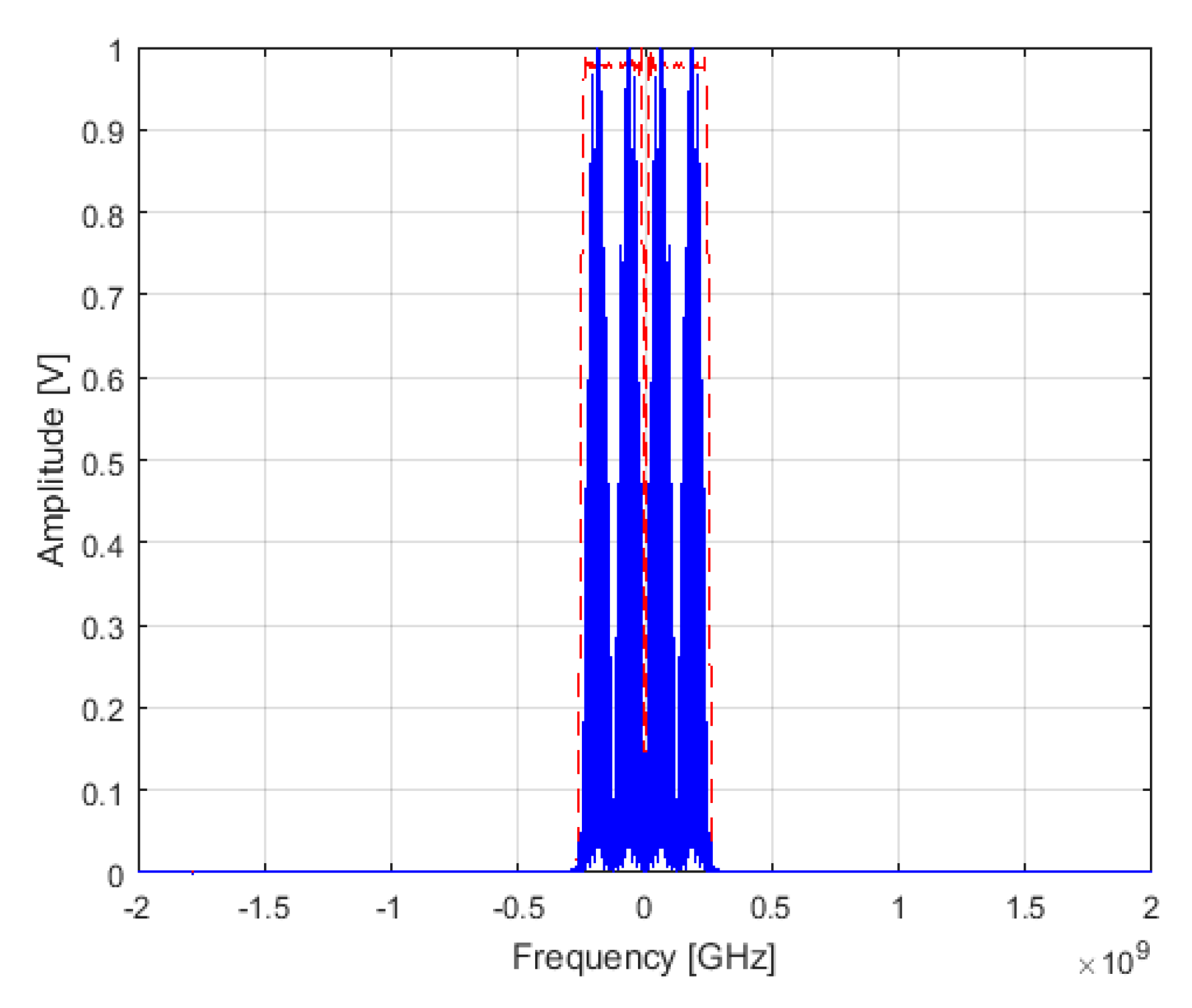 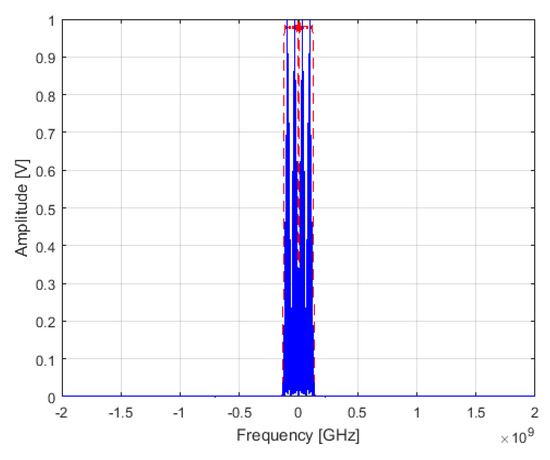 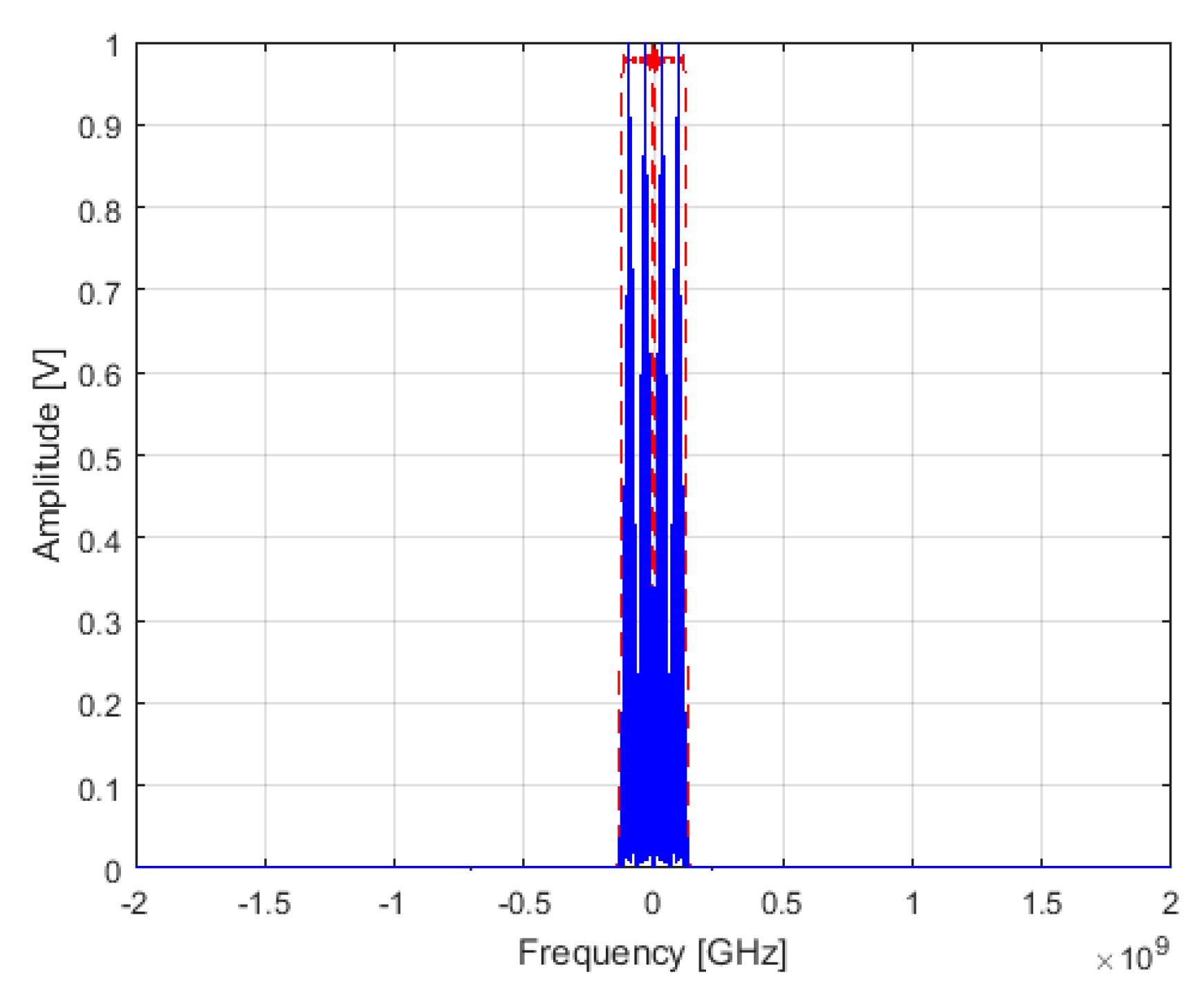 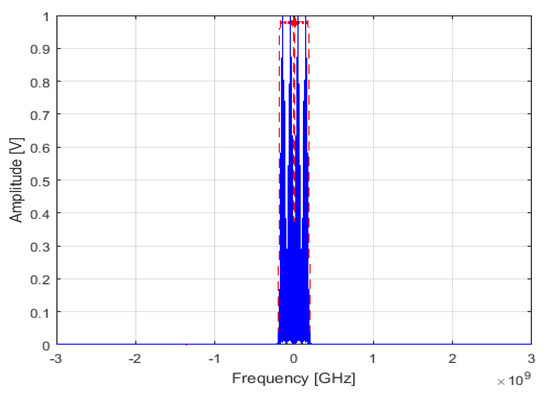 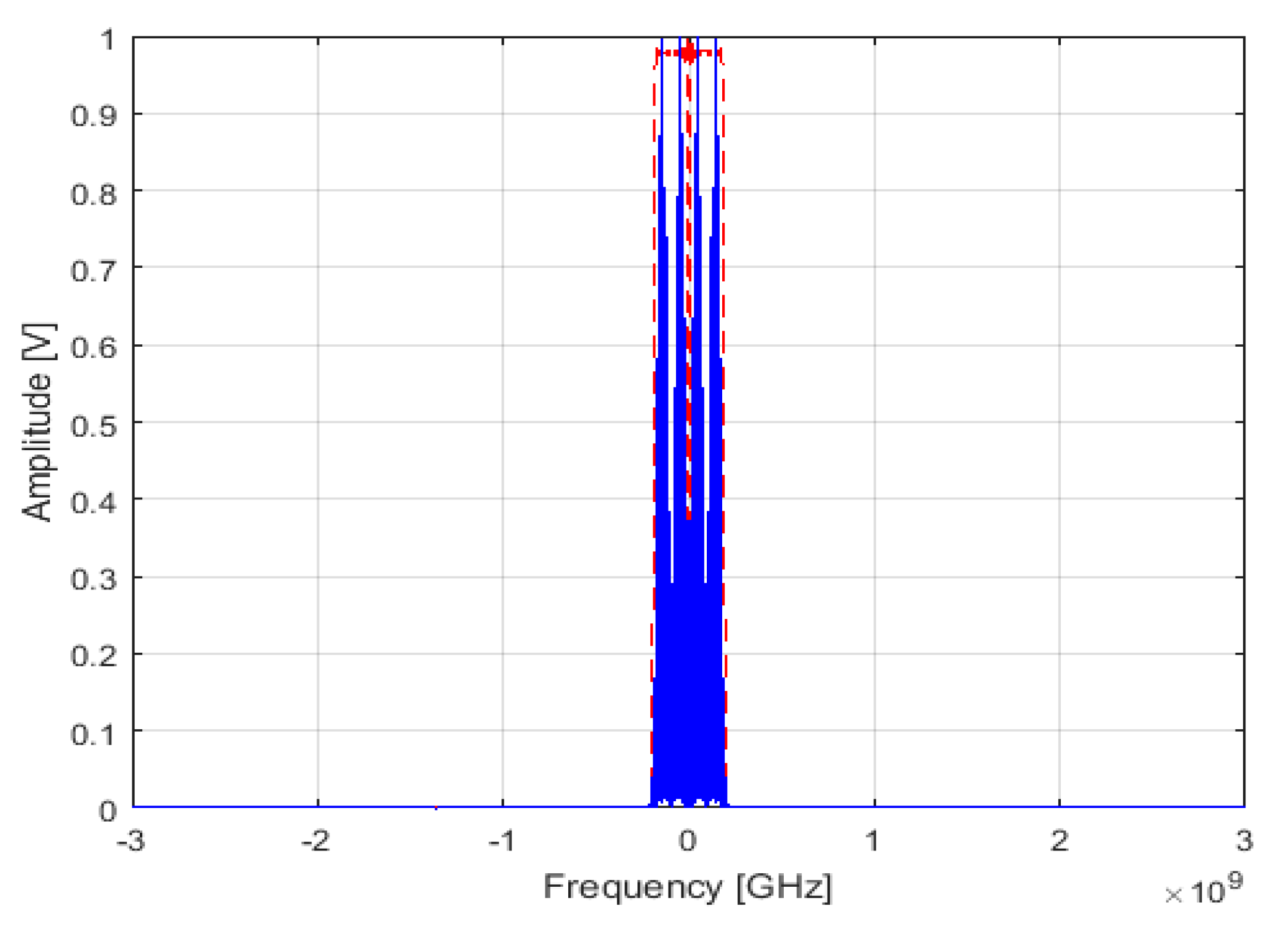 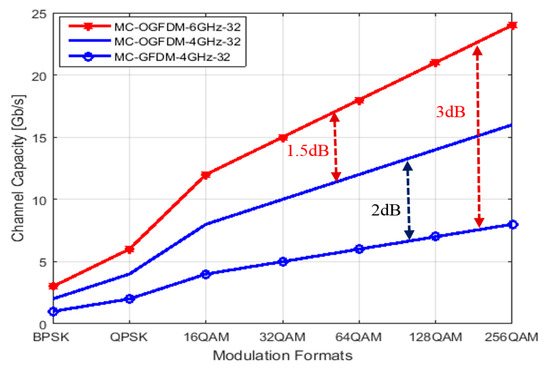 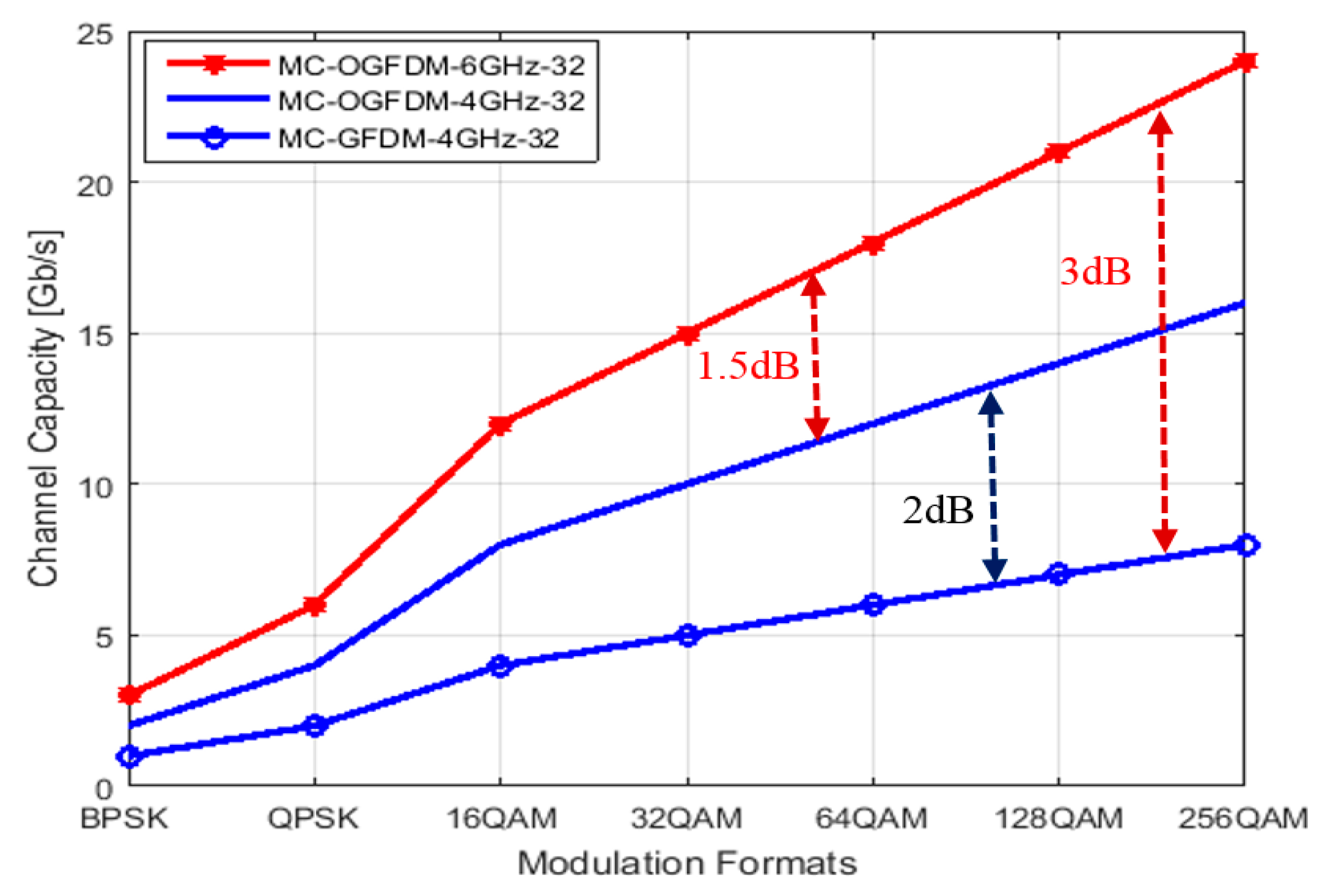 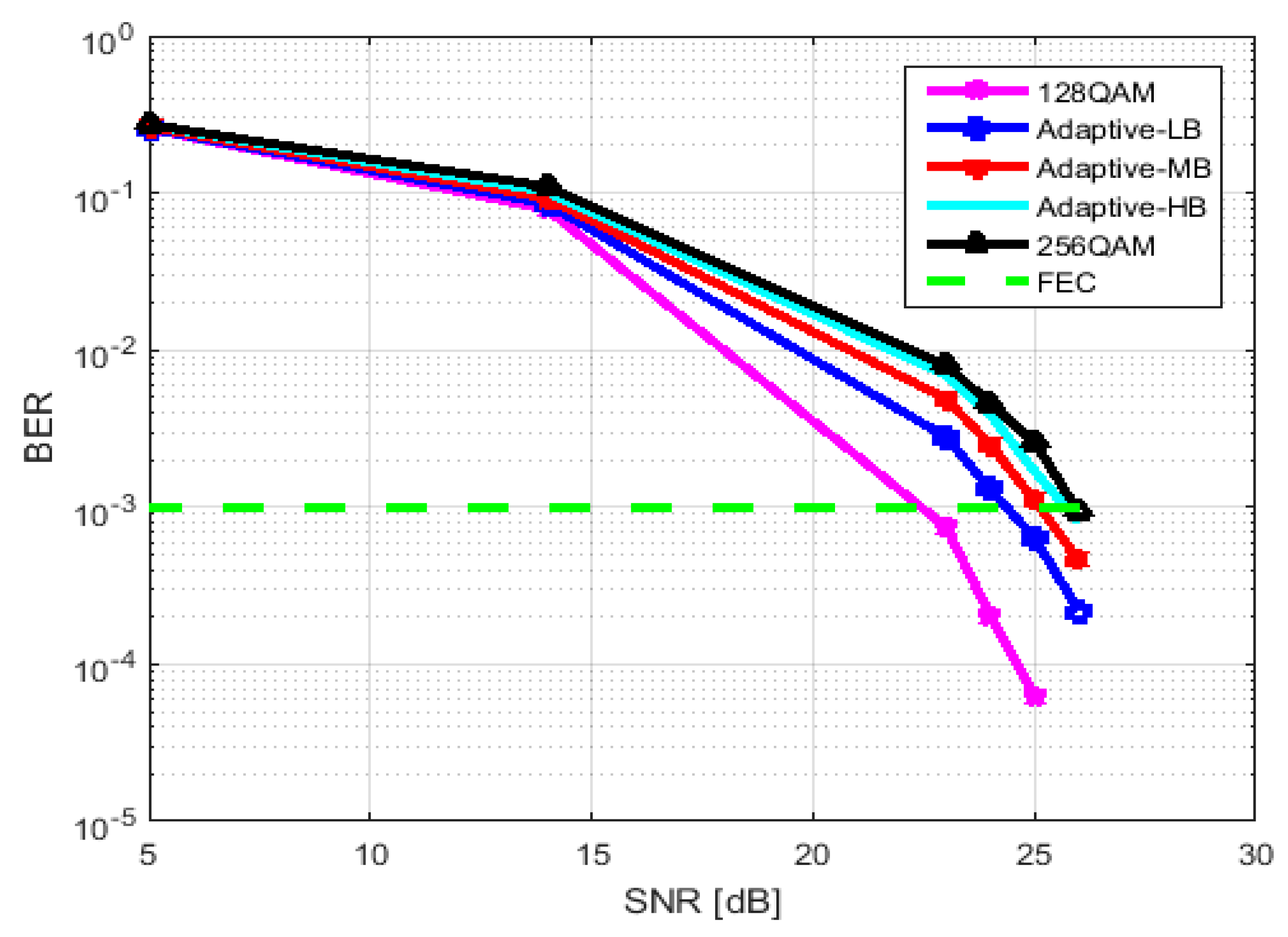 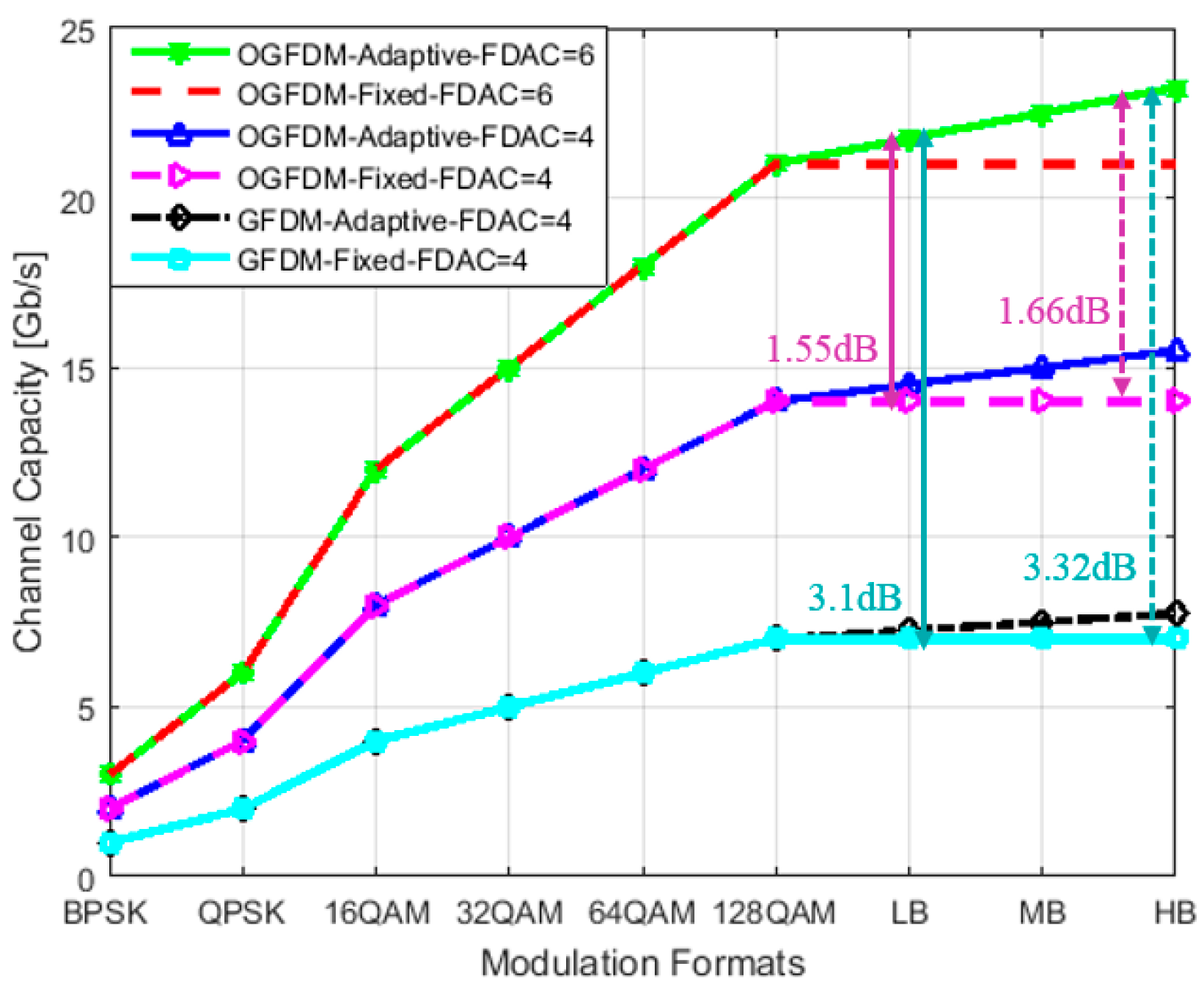 Table 2. System parameters of multi-carrier OGFDM.
Table 2. System parameters of multi-carrier OGFDM.
© 2020 by the author. Licensee MDPI, Basel, Switzerland. This article is an open access article distributed under the terms and conditions of the Creative Commons Attribution (CC BY) license (http://creativecommons.org/licenses/by/4.0/).
We use cookies on our website to ensure you get the best experience. Read more about our cookies here.
Accept
We have just recently launched a new version of our website. Help us to further improve by taking part in this short 5 minute survey here. here.
Never show this again