An Intelligent Spam Detection Model Based on Artificial Immune System

The security of mobile applications has become a major research field which is associated with a lot of challenges. The high rate of developing mobile applications has resulted in less secure applications. This is due to what is called the “rush to release” as defined by Ponemon Institute. Security testing—which is considered one of the main phases of the development life cycle—is either not performed or given minimal time; hence, there is a need for security testing automation. One of the techniques used is Automated Vulnerability Detection. Vulnerability detection is one of the security tests that aims at pinpointing potential security leaks. Fixing those leaks results in protecting smart-phones and tablet mobile device users against attacks. This paper focuses on building a hybrid approach of static and dynamic analysis for detecting the vulnerabilities of Android applications. This approach is capsuled in a usable platform (web application) to make it easy to use for both public users and professional developers. Static analysis, on one hand, performs code analysis. It does not require running the application to detect vulnerabilities. Dynamic analysis, on the other hand, detects the vulnerabilities that are dependent on the run-time behaviour of the application and cannot be detected using static analysis. The model is evaluated against different applications with different security vulnerabilities. Compared with other detection platforms, our model detects information leaks as well as insecure network requests alongside other commonly detected flaws that harm users’ privacy. The code is available through a GitHub repository for public contribution. View Full-Text
Keywords: vulnerability detection; Android applications; static analysis; dynamic analysis; mobile security; user privacy vulnerability detection; Android applications; static analysis; dynamic analysis; mobile security; user privacy
►▼ Show Figures 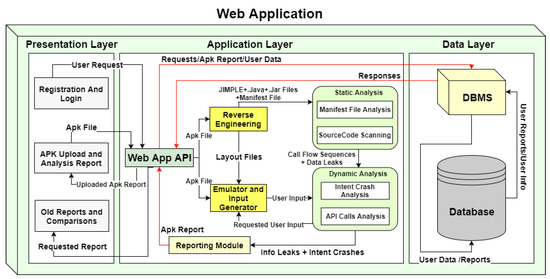