With sea level rise accelerating and coastal populations increasing, the requirement of coastal managers and scientists to produce accurate predictions of shoreline change is becoming ever more urgent. Waves are the primary driver of coastal evolution, and much of the interannual variability of the wave conditions in the Northeast Atlantic can be explained by broadscale patterns in atmospheric circulation. Two of the dominant climate indices that capture the wave climate in western Europe’s coastal regions are the ‘Western Europe Pressure Anomaly’ (WEPA) and ‘North Atlantic Oscillation’ (NAO). This study utilises a shoreline prediction model (ShoreFor) which is forced by synthetic waves to investigate whether forecasts can be improved when the synthetic wave generation algorithm is informed by relevant climate indices. The climate index-informed predictions were tested against a baseline case where no climate indices were considered over eight winter periods at Perranporth, UK. A simple adaption to the synthetic wave-generating process has allowed for monthly climate index values to be considered before producing the 103 random waves used to force the model. The results show that improved seasonal predictions of shoreline change are possible if climate indices are known a priori. For NAO, modest gains were made over the uninformed ShoreFor model, with a reduction in average root mean square error (RMSE) of 7% but an unchanged skill score. For WEPA, the gains were more significant, with the average RMSE 12% lower and skill score 5% higher. Highlighted is the importance of selecting an appropriate index for the site location. This work suggests that better forecasts of shoreline change could be gained from consideration of a priori knowledge of climatic indices in the generation of synthetic waves. View Full-Text
Keywords: coastal; climate; erosion coastal; climate; erosion
►▼ Show Figures 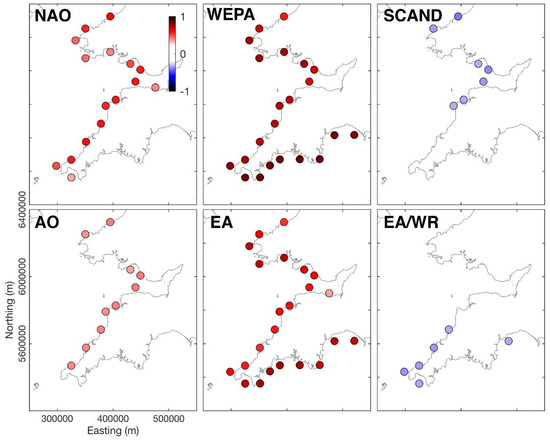