Zooplankton Distribution and Community Structure in the Pacific and Atlantic Sectors of the Southern Ocean during Austral Summer 2017–18: A Pilot Study Conducted from Ukrainian Long-Liners

Preliminary results of the pilot study of the zooplankton in the region between the Ross and Scotia Seas from November 2017 to April 2018 are presented. In total, 53 zooplankton samples were collected in the top 100 m water layer using vertical tows of a 0.1 m2 Juday net from four Ukrainian longliners operating during the Antarctic toothfish fishery. Total zooplankton abundance ranged from 3 to 2836 ind m−3 with a global mean of 360 ± 550 (±1 SD) ind m−3. The highest abundances were recorded at the northeastern Ross Sea. At those stations, small copepods (mainly Oithona spp., Oncaea spp., Ctenocalanus spp. and copepod nauplii) numerically dominated the samples. Total biomass ranged from 0.3 to 85 mg DW m−3 with a mean of 10.9 ± 14.5 mg DW m−3. The highest biomasses were recorded at the eastern Ross Sea, where pelagic tunicates Salpa thompsoni, siphonophores and ctenophora Callianira sp. accounted for >90% of total zooplankton biomass. At other stations, zooplankton biomass generally ranged from 5 to 20 mg DW m−3 with no clear pattern in distribution. The community composition was driven by the sampling latitude and/or season rather than longitudinally. This pilot study emphasized the unique opportunity to investigate zooplankton dynamics in the regions traditionally not sampled during the oceanographic surveys. It also created unprecedented opportunities to increase the seasonal and geographical zooplankton sampling coverage using ships of opportunity at a fraction of a dedicated oceanographic survey costs. The potential of such surveys are enormous in both providing invaluable information, contributing to existing long-term databases and enhancing an international collaboration in the Southern Ocean, particularly in light of recent modeling initiatives of the whole Antarctic system undertaken by the Commission for the Conservation of Antarctic Marine Living Resources. View Full-Text
Keywords: zooplankton; Southern Ocean; abundance; biomass; distribution; community composition; ships of opportunity zooplankton; Southern Ocean; abundance; biomass; distribution; community composition; ships of opportunity
►▼ Show Figures 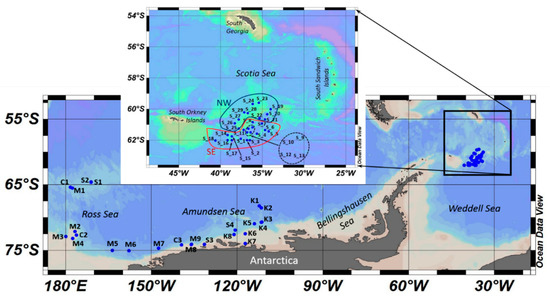