An Integrated Coastal Sediment Management Plan: The Example of the Tuscany Region (Italy)

Effects of Repeated Sand Replenishment Projects on Runs of a Beach-Spawning Fish, the California Grunion

Beach habitats are diminishing globally, particularly in urban areas, as sea-level rise, erosion, and shoreline hardening, along with reduced sediment inputs, combine to squeeze the coast. In California, USA an endemic marine fish, the California grunion, spawns on sandy beaches during late-night spring tides. Its unique recreational fishery is managed by the California Department of Fish and Wildlife. The City of Oceanside, CA contracts for annual harbor dredging and, after testing, places the sandy sediment on its public beach. The effects on local beach wildlife from this annual sand replenishment are not known. We examined the effect of this repeated activity as a case study over three years on the spawning runs of the California grunion. Some spawning runs occurred in all three years, but the fish avoided areas with high scarps in the intertidal zone that developed following sand placement activity. Grunion spawning runs have declined in the habitat range as a whole over the past two decades, and those in Oceanside have declined to an even greater extent. Increasing sandy beach habitat can be beneficial to wildlife, but the method of placement, timing of the project, and fate of the beach afterward can modulate or prevent beneficial effects. Frequent repetition of sand placement may accumulate impacts without allowing sufficient time for the ecosystem to recover. Rather than improving the habitat, these repeated projects in Oceanside may degrade the spawning habitat for the grunion. Alternative discharge methods and locations, slope and elevation designs, sediment volumes, and greater care in beach fill practices should be implemented to reduce future impacts. View Full-Text
Keywords: beach nourishment; beach restoration; ecosystem management; substrate; reproductive habitat; human impacts; beach-spawning fishes; essential fish habitat beach nourishment; beach restoration; ecosystem management; substrate; reproductive habitat; human impacts; beach-spawning fishes; essential fish habitat
►▼ Show Figures 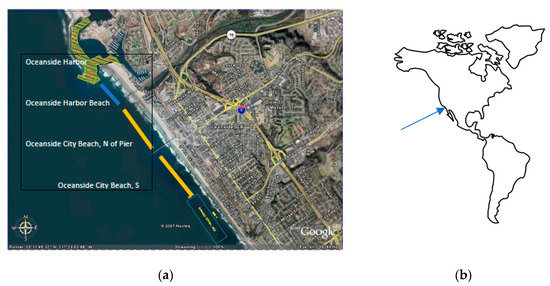