Photodegradation is a natural process that strongly affects the chromophoric fraction of dissolved organic matter (DOM), especially in surface water of the oceans. In the euphotic zone, the concentration and quality of DOM are mostly dependent on primary production by phytoplankton. The effect of photodegradation on algal DOM has not been investigated as much as on terrestrial DOM. In this study, we explored the effect of different spectral regions (i.e., full sun spectrum, visible light, 295–800 nm, 305–800 nm, and 320–800 nm) on algal exudates by Emiliania huxleyi, a ubiquitous coccolithophore. The optical properties (absorption and fluorescence) of algal DOM were investigated before and after irradiation with the different spectral regions. The absorption and fluorescence spectra were compared before and after irradiation. The results showed an increase in the effect of photobleaching with increasing irradiation energy for all of the absorbance indices. Similarly, the protein-like fluorescence decreased at increasing irradiation energy. The humic-like fluorescence, which was the most affected, did not show a linear trend between photobleaching and irradiation energy, which suggested that irradiation mainly determined a change in these molecules’ quantum yield. View Full-Text
Keywords: chromophoric dissolved organic matter; photobleaching; phosphorescence; fluorescence; Emiliania huxleyi chromophoric dissolved organic matter; photobleaching; phosphorescence; fluorescence; Emiliania huxleyi
►▼ Show Figures 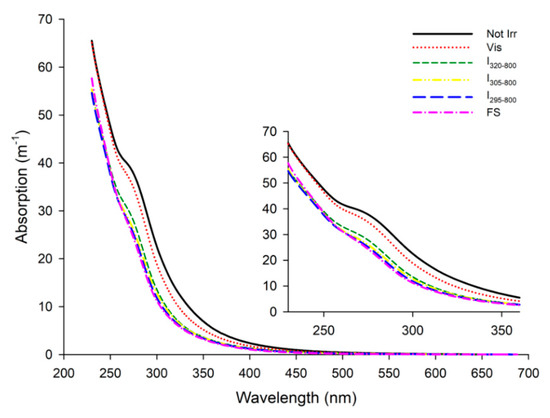