Accurate prediction of the self-propulsion performance is one of the most important factors for the energy-efficient design of a ship. In general, the hydrodynamic performance of a full-scale ship could be achieved by model-scale simulation or towing tank tests with extrapolations. With the development of CFD methods and computing power, directly predict ship performance with full-scale CFD is an important approach. In this article, a numerical study on the full-scale self-propulsion performance with propeller operating behind ship at model- and full-scale is presented. The study includes numerical simulations using the RANS method with a double-model and VOF (Volume-of-Fluid) model respectively and scale effect analysis based on overall performance, local flow fields and detailed vortex identification. The verification study on grid convergence is also performed for full-scale simulation with global and local mesh refinements. A series of sea trail tests were performed to collect reliable data for the validation of CFD predictions. The analysis of scale effect on hull-propeller interaction shows that the difference of hull boundary layer and flow separation is the main source of scale effect on ship wake. The results of the fluctuations of propeller thrust and torque along with circulation distribution and local flow field show that the propeller’s loading is significantly higher for model-scale ship. It is suggested that the difference of vortex evolution and interaction is more pronounced and has larger effects on the ship’s powering performance at model-scale than full-scale according to the simulation results. From the study on self-propulsion prediction, it could be concluded that the simplification on free surface treatment does not only affect the wave-making resistance for bare hull but also the propeller performance and propeller induced ship resistance which can be produced up to 5% uncertainty to the power prediction. Roughness is another important factor in full-scale simulation because it has up to an approximately 7% effect on the delivery power. As a result of the validation study, the numerical simulations of full-scale ship self-propulsion shows good agreement with the sea trail data especially for cases that have considered both roughness and free surface effects. This result will largely enhance our confidence to apply full-scale simulation in the prediction of ship’s self-propulsion performance in the future ship designs. View Full-Text
Keywords: hull-propeller interaction; full-scale CFD; scale effect; self-propulsion; statistical sea trails hull-propeller interaction; full-scale CFD; scale effect; self-propulsion; statistical sea trails
►▼ Show Figures 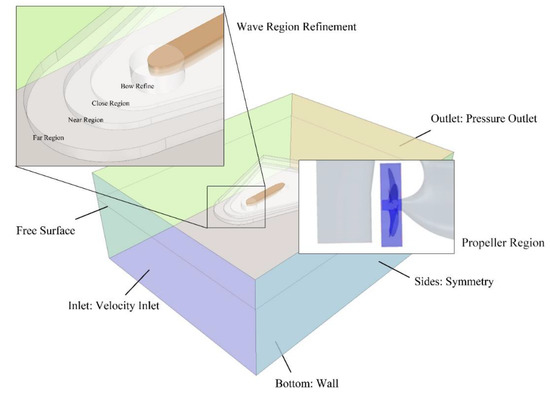