Coastal lagoons are habitats of great environmental value. However, they are currently subject to major threats, particularly due to increasing sea levels. This study aims to identify changes—both natural and induced by anthropic activity—and their impact on the recent evolution of three different types of coastal lagoons in Galicia (Louro, Vixán, and Xuño). The application of information obtained through laser imaging detection and ranging (LiDAR) techniques suggests that the outer limits of the three lagoon systems have not experienced any relevant changes in the last 60 years (i.e., no occupation of the lagoon area has been identified). However, the internal configuration of these wetland areas has experienced some alterations. A generalized increase in the area occupied by macrophytic communities (Phragmites australis, Scirpus maritimus, Juncus maritimus, etc.) has been observed. Image interpretation by geographic information systems (GIS) and field surveys suggest that the area currently occupied by macrophytes experienced a 7% to 63% increase at the expense of the free water body. This loss of flooded area is consistent with the increase in sedimentation rates associated with the convergence of several causes, such as the abandonment of traditional macrophyte biomass harvesting and agricultural activities around the lagoons, the expansion of riparian forests, and sediment contributions by erosion due to recurrent forest fires within the drainage basins of each lagoon. Finally, water and sediment composition suggest that, of the three studied lagoons, two of them (Louro and Vixán) are included within the definition of “coastal lagoons” (habitat code 1150) by the Habitats Directive (Directive 92/43/EEC), while the Xuño lagoon should be considered a “natural eutrophic lake” (habitat code 3150). View Full-Text
Keywords: coast; lakes; lagoons; sediment; wetlands; geographic information system; marine protected area; Galicia coast; lakes; lagoons; sediment; wetlands; geographic information system; marine protected area; Galicia
►▼ Show Figures 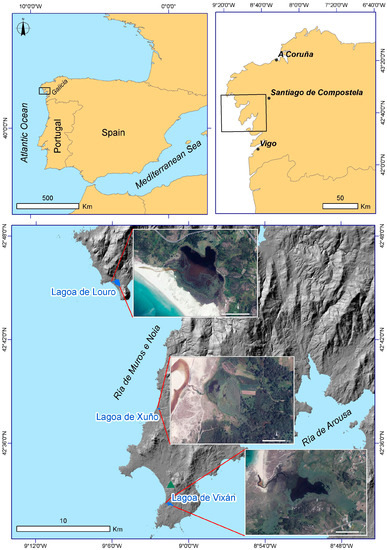