Mesoscale Morphological Changes of Nearshore Sand Banks since the Early 19th Century, and Their Influence on Coastal Dynamics, Northern France

Tidal sand banks are common along the coast of northern France facing the North Sea, where they form linear shore-parallel or slightly oblique sand bodies from shallow coastal areas to depths of tens of meters. Hydrographic surveys have been carried out since the 1830s for mapping the seabed of the coastal zone. An analysis of the bathymetry evolution shows significant morphological changes have occurred across the shoreface since the early 19th century, largely due to cross-shore and longshore sand bank migration. Our results show that nearshore sand banks mainly migrated onshore and gained sediment, especially during the 20th century; acting as temporary sediment sinks, which can in turn serve as sand sources for providing sediment to the coast. Alongshore, the migration and elongation of sand banks can be related to tidal asymmetry that is mostly directed to the east-north-east in the region. Shore-perpendicular movement can likely be explained by the action of shore-normal storm-waves in the nearshore zone after their refraction over shallow offshore sand banks. A seaward displacement of sand banks was also observed. This may be related to the combined action of waves and tidal currents which can induce erosion on one side of the bank, decreasing its width, and eventually leading to its seaward migration. Our observations point out that some nearshore sand banks respond to the action of currents and waves, and interact between each other via feedback morphodynamic processes induced by sand bank morphological changes. The substantial morphologic changes that affected the nearshore zone of northern France during the last centuries probably had large impacts on coastal hydrodynamics and associated shoreline evolution. View Full-Text
Keywords: shoreface evolution; tidal sand banks; macrotidal coast; Dover Strait; Southern North Sea shoreface evolution; tidal sand banks; macrotidal coast; Dover Strait; Southern North Sea
►▼ Show Figures 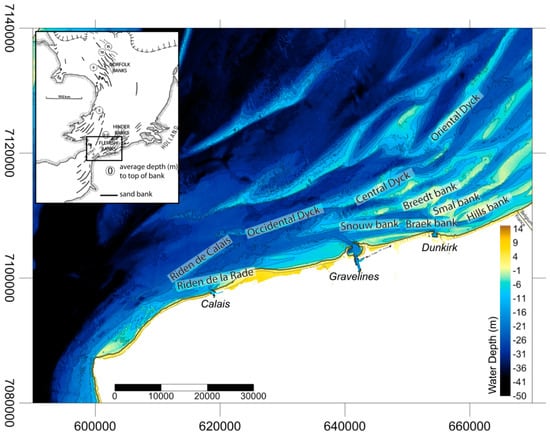