Cost and Materials Required to Retrofit US Seaports in Response to Sea Level Rise: A Thought Exercise for Climate Response
Previous Article in Journal / Special Issue

Northern European sea levels show a non-stationary link to the North Atlantic Oscillation (NAO). The location of the centers of the NAO dipole, however, can be affected through the interplay with the East Atlantic (EAP) and the Scandinavian (SCAN) teleconnection patterns. Our results indicate the importance of accounting for the binary combination of the NAO with the EAP/SCAN for better understanding the non-stationary drivers inducing sea level variations along the European coasts. By combining altimetry and tide gauges, we find that anomalously high monthly sea levels along the Norwegian (North Sea) coast are predominantly governed by same positive phase NAO+/EAP+ (NAO+/SCAN+) type of atmospheric circulation, while the Newlyn and Brest tide gauges respond markedly to the opposite phase NAO−/EAP+ combination. Despite these regional differences, we find that coherent European sea level changes project onto a pattern resembling NAO+/SCAN+, which is signified by pressure anomalies over Scandinavia and southern Europe forcing winds to trace the continental slope, resulting in a pile-up of water along the European coasts through Ekman transport. We conclude that taking into consideration the interaction between these atmospheric circulation regimes is valuable and may help to understand the time-varying relationship between the NAO and European mean sea level. View Full-Text
Keywords: European sea level; atmospheric circulation; teleconnections; satellite altimetry; tide gauges European sea level; atmospheric circulation; teleconnections; satellite altimetry; tide gauges
►▼ Show Figures 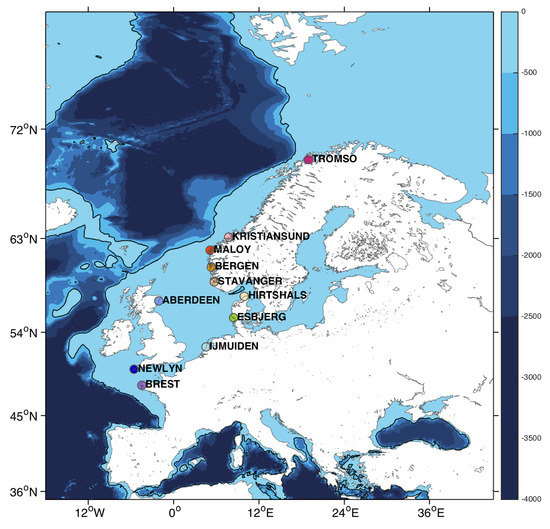