Estimation of Stock Status Using the LBB and CMSY Methods for the Indian Salmon Leptomelanosoma indicum (Shaw, 1804) in the Bay of Bengal, Bangladesh

Marine plastic pollution is currently an issue of mounting concern around the world. Stomach content of marine fish has been increasingly used as a valid proxy for detecting the presence of such a pollutant in marine biota, both for coastal and deep-water environments. Although ingestion of microplastics has been reported in an increasing number of species, the patterns of ingestion still remain unclear, depending closely on the interaction between the species and types of microplastics involved. In this context, we analysed and compared the stomach contents of two bathyal dwelling opportunistic feeder species namely Galeus melastomus and Coelorinchus caelorhincus. In particular, we analysed microplastic items according to their dimension, morphology and colour, and diet’s variation with size obtained through prey identification. Both species showed a higher frequency of occurrence of the blue filament-like middle-sized microplastics (1.01–4.75 mm) compared with the other categories, although this pattern was much more marked in C. caelorhincus than in G. melastomus. The latter conversely showed a larger array of ingested plastic items in terms of shape and colour. Matching plastic ingestion with dietary data suggested potential predator confusion occurring in C. caelorhincus through active mis-selection of a defined type of microplastic instead of some particular family of polychaetes, which resemble in shape, size, and color to that type. Otherwise, G. melastomus appeared more prone to a random ingestion of a larger array of microplastic items because of a more generalistic and less selective feeding strategy. Although further validation is needed, stomach contents of the two species showed evidence strong enough to be considered as potential bioindicator species of microplastic pollution, as required by the Marine Strategy Framework Directive for monitoring this pollutant in the marine environment. View Full-Text
Keywords: Coelorinchus caelorhincus; Galeus melastomus; microplastics; bio-indicator; feeding strategy; Mediterranean Coelorinchus caelorhincus; Galeus melastomus; microplastics; bio-indicator; feeding strategy; Mediterranean
►▼ Show Figures 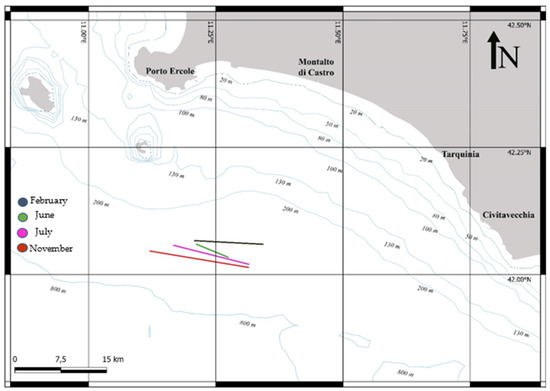