From Plates to Baits: Using a Remote Video Foraging System to Study the Impact of Foraging on Fouling Non-Indigenous Species

Marinas are a gateway for the introduction and establishment of non-indigenous species (NIS). In these habitats, competition and predation are crucial determinants for NIS establishment and invasiveness. However, fish trophic preferences and biotic effects inside marinas are poorly known. This study proposes a novel method that combines the deployment of settlement plates to recruit different assemblages, followed by their use as bait in remote underwater video systems. This combined approach, addressed as a remote video foraging system (RVFS), can record fish foraging behaviour, including feeding choices and their impacts on fouling assemblage composition. An experimental RVFS trial carried out in a marina of Madeira Island, Portugal (NE Atlantic), identified the Mediterranean parrotfish, Sparisoma cretense, as the most important fouling grazer in the area. S. cretense behaved as a generalist and increased the heterogeneity of fouling assemblages, which can hamper NIS dominance of the fouling and reduce the pressure of propagules from the marina to the natural environment. The RVFS tool was useful to understand the trophic links between foragers and fouling and has the potential to provide relevant information for the management of NIS introductions, establishment and spread. View Full-Text
Keywords: marina; trophic interactions; cascade effect; biotic resistance; RVFS marina; trophic interactions; cascade effect; biotic resistance; RVFS
►▼ Show Figures 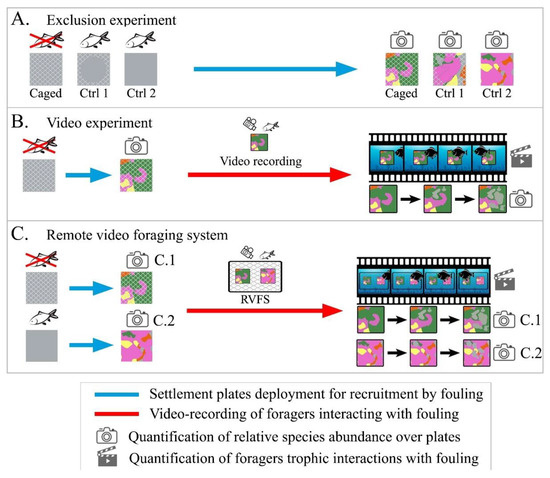