Fruit growth in most plants is strongly dependent on photosynthates produced in the leaves. However, if there are too many leaves, the lower part of the canopy becomes heavily shaded and yields are reduced. Experiments were conducted to determine if cultivars of strawberry (Fragaria × ananassa Duch.) grown in Queensland, Australia have excessive leaf production for adequate cropping. Seven cultivars and breeding lines were planted from March to May from 2004 to 2016 and the number of fully-expanded leaves, dry weight of the flowers and fruit, and yield/plant recorded (n = 23). Information was collected on daily maximum and minimum temperatures and solar radiation. Increases in the number of leaves/plant over the season followed a linear pattern (range in R2 from 0.81–0.99), with the relationship generally similar or better than a dose-logistic (sigmoid) function (range in R2 from 0.79–0.99). There were strong linear relationships between the number of leaves/plant and growing degree-days (GDDs), using a base temperature of 7 °C (range in R2 from 0.81–0.99). In contrast, there was no relationship between the number of leaves/plant produced each day and average season daily mean temperature (15.7 °C to 17.8 °C) or radiation (13.0 to 15.9 MJ/m2/day) (R2 < 0.10). Potential yield as indicated by the dry weight of the flowers and immature fruit/plant increased up to 40 to 45 leaves/plant (R2 = 0.49 or 0.50) suggesting that the cultivars do not have excessive leaf production. There was no relationship between yield and the number of leaves/plant (R2 < 0.10) because rain before harvest damaged the fruit in some years. These results suggest that the development of new cultivars with more leaves/plant might increase cropping of strawberries growing in the subtropics. View Full-Text
Keywords: growth analysis; growing degree-day; leaf production; productivity; solar radiation; temperature; yield growth analysis; growing degree-day; leaf production; productivity; solar radiation; temperature; yield
►▼ Show Figures 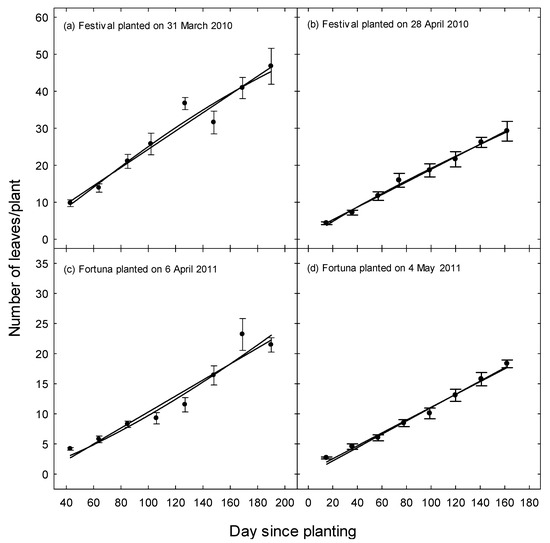