The Green Deal adopted by the European Commission assumes a significant reduction in the use of pesticides and synthetic fertilizers. It is necessary to search for environmentally safe technologies that will prevent a reduction in crop yield. One of such methods, which was examined in the study, is the foliar application of silicon, which can have a positive effect on root yield and its quality. In the period 2017–2019, a field experiment was carried out in which the effectiveness of the application of various forms of silicon (orthosilicic acid, a mixture of orthosilicic and polysilicic acid and calcium silicate) in sugar beet cultivation was assessed. The applied treatments of foliar application increased the root yield by 10.7–11.7%, the biological sugar yield by 8.4–12% and the pure sugar yield by 7.2–11.8% as compared to the control treatment. The differences between the individual treatments in terms of these characteristics were insignificant. Their impacts on the technological quality of roots (content of sugar, α-amino nitrogen, potassium and sodium) were different.
Keywords: foliar fertilization; Beta vulgaris; orthosilicic acid; silica nanoparticles; calcium silicate foliar fertilization; Beta vulgaris; orthosilicic acid; silica nanoparticles; calcium silicate

Sugar beet is the main raw material for sugar production in Europe. In 2019, it covered an area of 1.64 million ha in the European Union (28 countries) [1]. The production of sugar beet is limited by abiotic and biotic stress factors. The “farm to fork” strategy adopted by the European Commission assumes a significant limitation of the use of plant protection products and mineral fertilizers [2]. In order to prevent a reduction in sugar beet production, it is necessary to search for modern and environmentally safe production methods. An innovative method to limit their impact on sugar yields is the foliar application of products containing silicon (Si) [3]. This treatment primarily increases the tolerance of plant to water stress. It contributes to the growth of the root yield and usually does not significantly affect the technological quality of the roots, which in turn increases the biological yield of sugar and pure sugar yield.
It is commonly believed that the best effects are obtained with foliar silicon in the form of stabilized orthosilicic acid [4]. The research results show that good results in sugar beet production can be obtained by using marine calcite [5,6,7,8], a mixture of orthosilicic and polysilicic acids [4,8], potassium silicate [9] or silica nanoparticles [10,11].
The aim of the study is to assess the effectiveness of the foliar application of silicon-containing products in the form of orthosilicic acid, a mixture of orthosilicic and polysilicic acid and calcium silicate on the root yield, technological quality, biological sugar yield and pure sugar yield and indicate which effect is the strongest for the studied traits.
The following research hypothesis was assumed: the foliar application of various forms of silicon in sugar beet cultivation has a diversified impact on the root yield, technological quality as well as the biological and pure yield of sugar.

The weather conditions have a strong influence on the sugar beet yield [31,32,33,34,35]. In our research, the highest yields of roots and sugar were obtained in 2017 and 2019. This was definitely lower in 2018, which was characterized by a higher temperature each month during the vegetation period in comparison to the multi-year average.
The length of the growing season is determined by the sowing and harvesting dates. The sowing date depends on the course of weather conditions in early spring. In our research, the length of the growing season was 195 days in 2017, 178 days in 2018 and 180 days in 2019. The variation in the harvest date was caused by the weather conditions in this period.
The final trait in sugar beet production is pure sugar yield. It depends primarily on the root yield, and the effect of the sucrose content in the roots (positive effect) and molasses-forming components (negative effect) is much smaller. With a similar plant density during harvesting, the root yield and, consequently, the pure sugar yield are determined by the fresh weight of the root [35,36]. Our research confirmed the beneficial effect of foliar application of the tested silicon forms on fresh root mass and root yield.
In the available literature, there are only a few publications on the effects of the foliar application of silicon in the cultivation of sugar beet. The increases in the yield of sugar beet roots obtained in our research as a result of the foliar application of silicon-containing products were lower than those obtained in previous studies (Table 6). Only some studies on production fields did not increase the root yield after the foliar application of marine calcite [7]. The increase in the yield after the application of calcium silicate, obtained in the authors’ research, contradicts some opinions that silicates applied on leaves only reduce infections and have no influence on the yield [37]. In the case of the biological yield of sugar and pure sugar yield, the observed gains were lower than in previous studies with some exceptions. The beneficial effect of nano-Si on the increase drought tolerance of sugar beet depends on the selection of an appropriate concentration, as too high a concentration may be toxic for plants subjected to severe drought stress [38]. Previous studies have shown that the foliar application of various forms of silicon was profitable for sugar beet producers [39,40].
A crop with a production technology similar to that of sugar beet is potato. In the case of potato, most studies proved a positive effect of the foliar application of various forms of silicon on the tuber yield, and the dry matter content in tubers was observed (Table 7).
The main feature of the technological quality of sugar beet roots is the sucrose content. In our research, this increased after the foliar application of orthosilicic acid, decreased after using a mixture of orthosilicic and polysilicic acids and did not change significantly as a result of the use of calcium silicate. This is confirmed by previous research results, in which the effect of the foliar application of silicon-containing products was also varied (Table 6).
Among the molasses-forming components, the most harmful is α-amino nitrogen, which limits the extraction of sugar from the roots the most and increases its losses. In our research, only the foliar application of orthosilicic acid resulted in a significant increase in the content of this component. In previous studies, the effect of the foliar application of silicon, regardless of its form and the content of other components in foliar fertilizers and stimulators, caused slight changes in the content of α-amino nitrogen in sugar beet roots.
The varied influence of the foliar application of silicon could result from the different course of weather conditions during the growing season in individual years of the study. In general, the less favourable they were to plant growth and development, the more pronounced the effects were.
The results of this study allowed us to reject the research hypothesis that various forms of silicon applied in foliar application have a different effect on the yield of roots, their technological quality and biological sugar yield and pure sugar yield.

Practical Implications of this Study

The conclusion is that for agricultural practice, the use of all three forms of silicon tested in the experiments can be recommended. It is impossible to indicate which of the tested forms of silicon has the most beneficial effect. This is useful for farmers as it guarantees a wide range of products that can be used for application.
The presented research results prove that the foliar application of silicon, regardless of its form, has a beneficial effect on the root yield, biological sugar yield and pure sugar yield. The effect of the application of silicon depends on weather conditions in years of the study as well on the interaction between weather conditions and the studied treatments.
Further research should focus on determining the optimal date of foliar application of the products with silicon depending on the weather conditions. Unfortunately, such research is difficult to perform in field conditions; it can be performed under controlled laboratory conditions, but the results thus obtained are often not confirmed in field conditions.

The data presented in this study are available on request from the corresponding author. The data are not publicly available due to ongoing unpublished research. 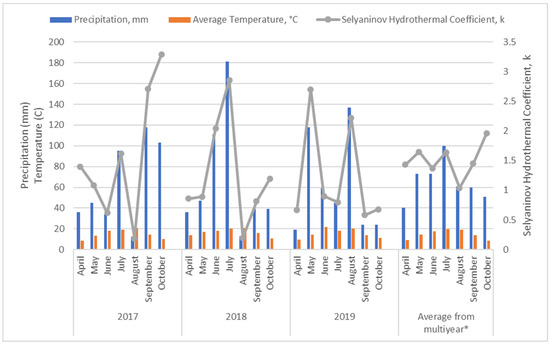 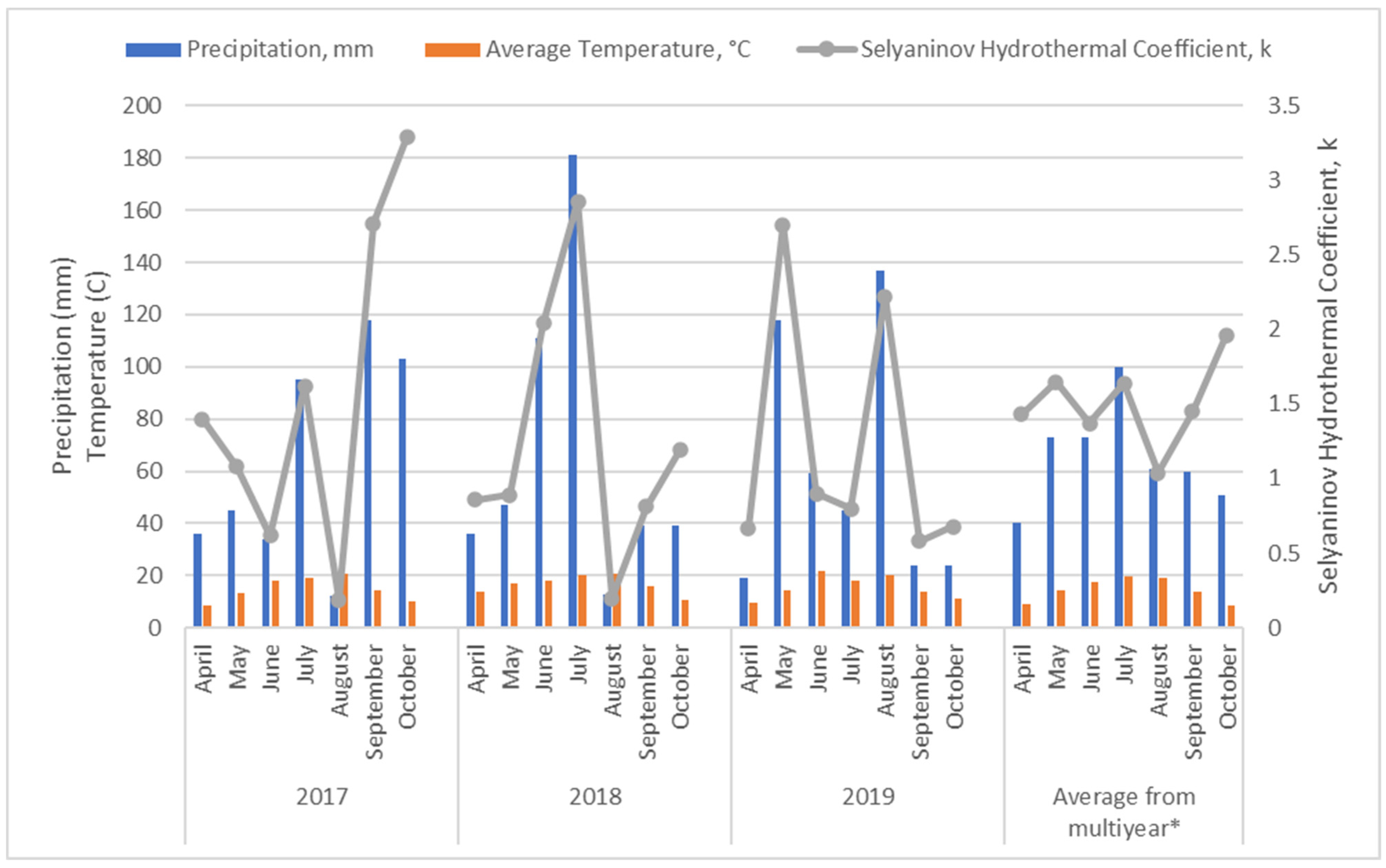