Breeding for Nutritional and Organoleptic Quality in Vegetable Crops: The Case of Tomato and Cauliflower

Due to novel and more demanding consumers’ requirements, breeding of vegetable crops confronts new challenges to improve the nutritional level and overall appearance of produce. Such objectives are not easy to achieve considering the complex genetic and physiological bases. Overtime, plant breeders relied on a number of technologies and methods to achieve ever changing targets. F1 hybrid seed production allowed the exploitation of heterosis and facilitated the combination of resistance and other useful genes in a uniform outperforming variety. Mutagenesis and tissue culture techniques permitted to induce novel variation, overcome crossing barriers, and speed up the achievement of true-breeding lines. Marker-assisted selection was one of the milestones in fastening selection, starting from the early ’90s in almost all seed companies. Only recently, however, are novel omics tools and genome editing being used as cutting-edge techniques to face old and new challenges in vegetable crops, with the potential to increase the qualitative value of crop cultivation and solve malnutrition in 10 billion people over the next 30 years. In this manuscript, the evolution of breeding approaches in vegetable crops for quality is reviewed, reporting case studies in tomato (Solanum lycopersicum L.) and cauliflower (Brassica oleracea var. botrytis L.) as model systems for fleshy fruit and floral edible parts, respectively.
Keywords: vegetable breeding; quality; cauliflower; tomato; transgenesis; cisgenesis vegetable breeding; quality; cauliflower; tomato; transgenesis; cisgenesis

Vegetable quality improvement is a global requirement due to current evolution of consumers’ demands. In particular, producing vegetables with enhanced nutritional and organoleptic quality is one of the most challenging targets for breeding, facing with climatic changes and the needs for a more efficient production system [1]. High throughput metabolomic, transcriptomic and genomic advances represent useful tools to identify genetic architecture and biochemical pathways and also to predict breeding values for selection and deployment [2].
Among vegetables, tomato and cauliflower, cultivated throughout the world, are important dietary sources of phytochemical and bioactive compounds and represent model systems for fleshy fruit and floral edible parts, respectively [3,4]. While advanced genomic and genetic transformation resources are available in tomato for next-generation precise breeding, the availability of such resources in cauliflower is lower and hence breeding methods are essentially conventional, resulting in slow progress, despite recent interesting novel products [5].
In this manuscript, the evolution of breeding in tomato and cauliflower is reviewed, focusing on nutritional and organoleptic quality, flavour, and taste.

2. Breeding for Old and New Challenges in Vegetable Crops

3. Botanical Aspects of Tomato and Cauliflower

Notably, tomato (Solanum lycopersicum L.) is one of the most consumed vegetables worldwide and the area under cultivation is increasing daily, as it is a relatively short duration crop, gives a high yield, and is economically attractive. Total production is around 180 million tons globally and the main production regions are located in temperate zones, close to the 40th parallels North and South (http://www.fao.org/faostat (accessed on 28 April 2021)). S. lycopersicum L. can be further divided into two botanical types: large-fruited tomatoes S. lycopersicum var. lycopersicum (SLL) and cherry-sized early domesticates S. lycopersicum var. cerasiforme (SLC) (Figure 2) [27]. From a vegetative point of view, tomatoes are distinguished into three different types of plants: (i) tall or indeterminate type, (ii) semi-bush or semi-indeterminate type, (iii) bush or determinate type. Due to its economic importance and short growing cycle, a reference tomato genome (processing tomato variety Heinz 1706) has been sequenced and released [28].
Thanks to the superior performance of hybrids, due to heterosis, commercial varieties are mainly F1 hybrids that can be produced by: (i) hand emasculation and hand pollination, (ii) using male sterility and hand pollination, (iii) using male sterility and natural pollination [29].
Cauliflower (Brassica oleracea var. botrytis L.) is an important vegetable grown on approximatively 9 million Ha worldwide with a production of around 27 million tons in 2020 combined with broccoli (www.fao.org) (accessed on 28 April 2021). Cauliflower belongs to the Brassica genus which contains 37 species of which 6 interrelated ones gained worldwide economic importance. The various forms of B. oleracea include vegetable and forage crops: cabbage, broccoli, kale, brussels sprouts, cauliflower, and others. The Cauliflower group is divided into subgroups based on thermic and photoperiodic requirements necessary to produce the curd (e.g., tropical, subtropical, and winter types) or, more commonly, on the colour of the edible organ (namely head or flesh): white, green (e.g., Romanesco type), light yellow, purple, and more recently also orange cauliflowers (Figure 3) [30,31]. Nevertheless, as anticipated by Schulz in 1919, many B. oleracea forms come from Mediterranean wild ecotypes/landraces [32]; in particular, cauliflower domestication derived from a heading Calabrese broccoli through an intermediate Sicilian type in southern Italy [33,34].
Cauliflower hybrids also show commercial advantages thanks to heterosis, mainly in terms of uniform maturity, total yield, better curd quality for compactness and colour, and resistance to pests and diseases. There are two pollination mechanisms for hybrid seed production in cauliflower: self-incompatibility (SI) and cytoplasmic male sterility, largely used in the commercial hybrid seed production (improved Ogura based CMS lines) [35,36].

4. Quality in Tomato and Cauliflower

5. Evolution of Breeding for Nutritional and Organoleptic Quality

Domestication and plant breeding increased yield and productivity but led to genetic erosion and reduction in nutritional value and taste in tomato crop [64,128]. Based on the previous assumption, the current commercial varieties should show a detrimental in quality compared to old landraces. Nevertheless, Schouten and co-authors evidenced an increase in diversity for aroma compounds in the cultivars grown in The Netherlands using a combined approach of genomics and metabolomics [142]. Interestingly, this consideration demonstrates the need to develop further investigations on the complex genetic mechanism controlling quality in vegetables.
In this review, we highlighted the importance of quality traits in tomato and cauliflower, focusing on phytochemical and bio-active compounds linked to flavour and taste and how plant breeding can respond to novel consumers’ requirements. The two crops can be considered as model systems for fleshy fruit and inflorescence edible portion, respectively. Comparing plant breeding activities and results achieved in the two species, a relevant gap could be denoted, depending not only on the higher economic value of tomato but also on a reduced availability of genomic and biotechnological resources in cauliflower [5,136].
Advances in -omics technologies make it possible to elucidate the genetic and molecular bases of the multiple traits composing quality using genetic, genomic, and metabolomics approaches, particularly in case of pleiotropy and unfavourable trait association [143]. The application of CRISPR/Cas in tomato breeding triggered the so-called de novo domestication of tomato varieties by introducing elite traits evolved during domestication and selective breeding into its wild relative/ancestor [144]. A similar technology, applied to cauliflower, could fasten breeding, reducing the gap with other model system crops. Furthermore, CRISPR/Cas could be used also in mutagenesis, being more precise than random mutagenesis technologies using chemicals or radiations. These tools are continuously improving to become more efficient and precise for an era of fast breeding for improved nutritional and organoleptic quality in vegetables.
Plant breeding programs are more and more increasing into complexity in terms of traits and underlying genetic and physiological factors. Nevertheless, the new genomic tools and genome editing approaches will help face such complexity increasing the efficiency of selection and the precision of new variability induction. As a result, positive implications related to the bioavailability and exploitation of functional compounds in improved vegetables can be expected [145].
Consumer acceptance of gene-edited vegetables is also an important issue to be considered to reach a commercial success, depending on several variables. Indeed, Kato-Nitta and co-authors (2019) reported the results of a survey conducted in Japan on expert and public perceptions on gene-edited crops. The study revealed the uncertainty for public acceptance but also the need of knowledge toward emerging breeding technologies in order to understand the value and risk perceptions [146].
The excessive regulatory load and the scale of investment required for approval of new genotypes has limited the application of transgenic technology to a few crops for extensive farming (thus not including vegetables) and a few characters (almost exclusively resistance to insects and herbicides). The novelty and value of genomic editing in applied breeding has largely recognized. Nevertheless, before such technology could be fully implemented and largely produce practical results, it will be important that a science-based regulatory frame be applied consistently worldwide [147,148,149,150,151].

All the authors contributed equally. All authors have read and agreed to the published version of the manuscript.

Tomato breeding activities at CREA Research Centre for Vegetable and Ornamental Crops are presently carried out in the framework of BRESOV and LIVESEED projects, funded by the European Union Horizon 2020 research and innovation program under grant agreements Nos. 774244 and 727230, respectively.

The authors acknowledge the BRESOV project for supporting the publication costs of this review. 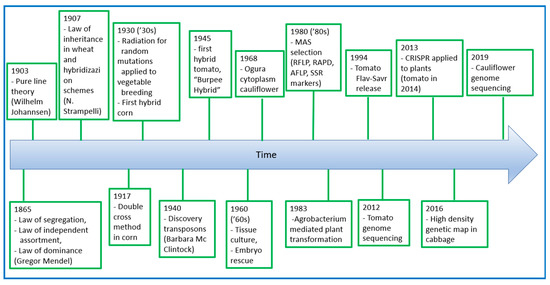