Effect of Colour of Light on Rooting Cuttings and Subsequent Growth of Chrysanthemum (Chrysanthemum × grandiflorum Ramat./Kitam.)
Previous Article in Journal

Comparative Assessment of Hydroponic Lettuce Production Either under Artificial Lighting, or in a Mediterranean Greenhouse during Wintertime

Butterhead lettuce was grown hydroponically in a vertical farm under high (HLI) and low (LLI) light intensity (310, and 188 μmol m−2 s−1, respectively) and compared to hydroponically grown lettuce in a greenhouse (GT) during wintertime in Athens, Greece (144 μmol m−2 s−1). The highest plant biomass was recorded in the HLI treatment, whereas LLI and GT produced similar plant biomass. However, the LLI produced vortex-like plants, which were non-marketable, while the plants in the GT were normal-shaped and saleable. Net photosynthesis was highest in the HLI and higher in the LLI than in the GT, thereby indicating that light intensity was the dominant factor affecting photosynthetic performance. Nevertheless, the unsatisfactory performance of the LLI is ascribed, not only to reduced light intensity, but also to reduced light uniformity as the LED lamps were closer to the plants than in the HLI. Furthermore, the large solar irradiance variability in the GT resulted in substantially higher adaptation to the increased light intensity compared to LLI, as indicated by chlorophyll fluorescence measurements. Light intensity and photoperiod are believed to be the primary reasons for increased nitrate content in the GT than in the vertical farming treatments. View Full-Text
Keywords: artificial lighting; chlorophyll fluorescence; gas exchange; indoor farming; soilless culture artificial lighting; chlorophyll fluorescence; gas exchange; indoor farming; soilless culture
►▼ Show Figures 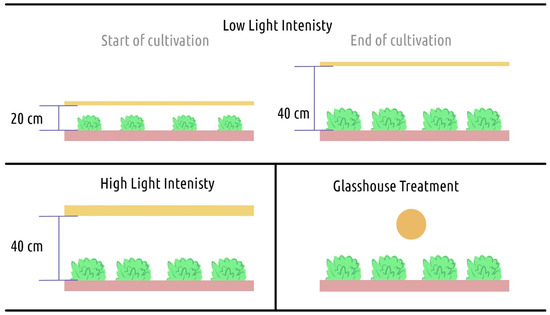