Evaluation of Tropical Tomato for Growth, Yield, Nutrient, and Water Use Efficiency in Recirculating Hydroponic System
Next Article in Special Issue

Farmers’ Beliefs and Concerns about Climate Change: An Assessment from Southern Saudi Arabia

Climate change constitutes a major threat to agricultural production, food security, and natural resource management. Saudi Arabia is particularly susceptible to increasing temperatures and extreme climatic events, such as arid weather and drought. The purpose of this study is to assess farmers’ beliefs and concerns as regards climate change. Extensive interviews were conducted with 164 farmers in the Jazan region. Results revealed that 89.6% of the farmers believed that climate change is due to human activities and 93.3% believed that it is because of natural change. Seventy-five percent of the farmers were concerned about insects and 73% about the prevalence of weeds on their farms. Findings of cluster analysis revealed that farmers who are more likely to believe in climate change are more in agreement with the role of extension services in capacity building. Farmers’ beliefs about climate change were significantly influenced by membership of agricultural cooperatives, access to loans, use of extension services, age, farm size, and level of soil fertility. Access to loans was the only significant factor to explain the differences in farmers’ concerns. These results suggest the need for capacity-building activities targeted at improving farmers’ adaptability to manage climate variability. View Full-Text
Keywords: beliefs; concern; climate change; farmers; capacity-building; Saudi Arabia beliefs; concern; climate change; farmers; capacity-building; Saudi Arabia
►▼ Show Figures 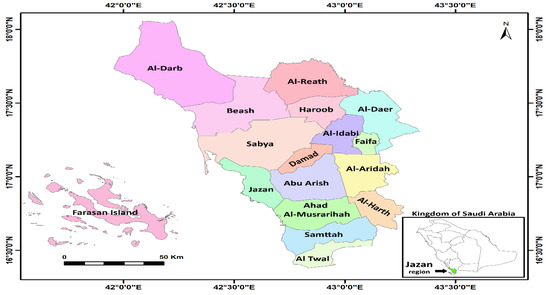