Pesticide Residues in Some Polish Herbs

Western Bahia, part of a large Brazilian agricultural frontier, is located mainly in fragile, sandy soils in a tropical seasonal climate with dry winters, characteristics that facilitate soil carbon loss. This study evaluates whether rainfed and irrigated agriculture in Western Bahia were able to sequester carbon and re-establish the soil organic carbon content (SOCC) lost due to land use change. Between 2010 and 2018, a total of 5469 soil samples were collected in the 0.00–0.20 m soil layer from nine farms and were used to calculate the annual rate of SOCC variation. The most recent SOCC measured in plots where land use change occurred 20 years ago was compared with the SOCC measured in areas of native vegetation (Cerrado). Results showed that (i) irrigated sandy agricultural lands replenished SOCC to the level observed in native vegetation by 20 years after a land use change event and are still capturing carbon at a significant rate, (ii) clayey, rainfed agricultural lands also sequester carbon, but these soils are not representative of the region, and (iii) sandy, rainfed agricultural lands, the predominant soil type and management practice in Western Bahia, are not a sink of CO2. View Full-Text
Keywords: soil carbon; sandy soils; Western Bahia; land use change soil carbon; sandy soils; Western Bahia; land use change
►▼ Show Figures 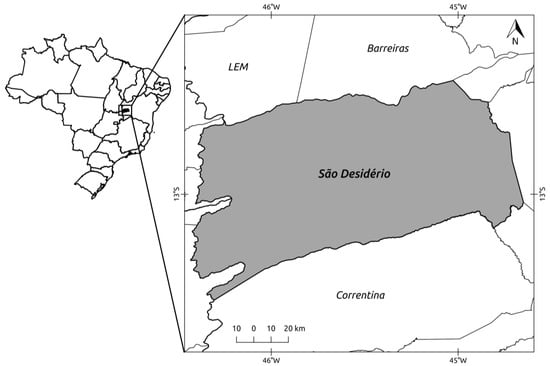