The Determinants of Risk Transmission between Oil and Agricultural Prices: An IPVAR Approach
Previous Article in Journal

Common bean (Phaseolus vulgaris L.) is an important grain legume for food and cash of the smallholder farmers worldwide. However, the total potential benefits to be derived from the common bean as a source of food and income, its complementarities with non-legume food crops, and significance to the environment are underexploited. Intensification of common bean could provide approaches that offer new techniques to better manage and monitor globally complex systems of sustainable food production. Therefore, this study tried to assess the productivity of common bean bushy varieties when are involved as part of an intercrop with maize (Zea mays L.) in varying agro-ecological zones. The factors evaluated were the cropping seasons/years (S) (2015 and 2016), agro-ecological zones (A) above sea level (lower 843 m, middle 1051 m, upper 1743 m), and cropping systems (C) (sole, intercrop). The data collected were the total biomass, number of pods per plant and seeds per pod, 100-seed weight as yield components, and grain yield. Bean and maize grain yields were used to calculate the partial (P) and total land equivalent ratio (LER). Results indicated that the main effects of S, A, C, and the interaction effects of S × A, S × C, S × A × C were significant on bean grain yields. Interactions of S × A × C were also significant on all measured variables. Results also indicated that continuous intercropping of bean with maize over two cropping seasons resulted in the increase of bean grain yields from 1.5 to 2.3 t ha−1 in the lower altitude, 2.0 to 2.3 t ha−1 in the middle altitude, and 1.8 to 2.9 t ha−1 in the upper altitude. Land utilization advantage of intercrops over monocultures yielded a total LER of 1.58, whereas the average partial land equivalent ratio (PLER) of individual beans was 1.53. View Full-Text
Keywords: agricultural systems; food crops; smallholders; sustainable intensification agricultural systems; food crops; smallholders; sustainable intensification
►▼ Show Figures 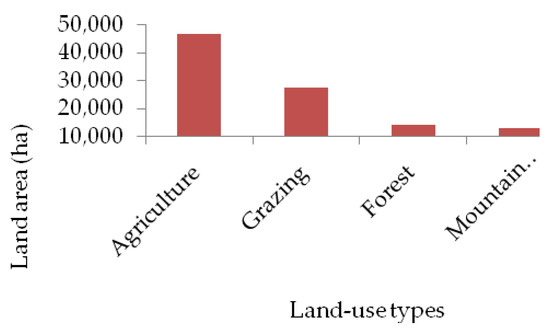 Nassary, E.K.; Baijukya, F.; Ndakidemi, P.A. Assessing the Productivity of Common Bean in Intercrop with Maize across Agro-Ecological Zones of Smallholder Farms in the Northern Highlands of Tanzania. Agriculture 2020, 10, 117. https://doi.org/10.3390/agriculture10040117


Nassary EK, Baijukya F, Ndakidemi PA. Assessing the Productivity of Common Bean in Intercrop with Maize across Agro-Ecological Zones of Smallholder Farms in the Northern Highlands of Tanzania. Agriculture. 2020; 10(4):117. https://doi.org/10.3390/agriculture10040117


Nassary, Eliakira Kisetu, Frederick Baijukya, and Patrick Alois Ndakidemi. 2020. "Assessing the Productivity of Common Bean in Intercrop with Maize across Agro-Ecological Zones of Smallholder Farms in the Northern Highlands of Tanzania" Agriculture 10, no. 4: 117. https://doi.org/10.3390/agriculture10040117