Tobacco is an essential economic crop in China. The detection of tobacco plants in aerial images plays an important role in the management of tobacco plants and, in particular, in yield estimations. Traditional yield estimation is based on site inspections, which can be inefficient, time-consuming, and laborious. In this paper, we proposed an algorithm to detect tobacco plants in RGB aerial images automatically. The proposed algorithm is comprised of two stages: (1) A candidate selecting algorithm extracts possible tobacco plant regions from the input, (2) a trained CNN (Convolutional Neural Network) classifies a candidate as either a tobacco-plant region or a nontobacco-plant one. This proposed algorithm is trained and evaluated on different datasets. It demonstrates good performance on tobacco plant detection in aerial images and obtains a significant improvement on AP (Average Precision) compared to faster R-CNN (Regions with CNN features) and YOLOv3 (You Only Look Once v3). View Full-Text
Keywords: tobacco plant; region proposal; object detection; convolutional neural network tobacco plant; region proposal; object detection; convolutional neural network
►▼ Show Figures 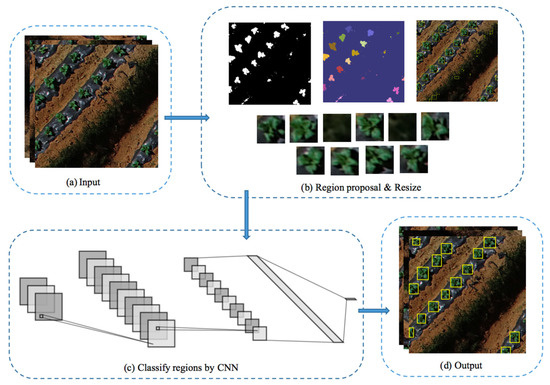