Sodium Hypochlorite Treatment: The Impact on Bacteria and Endotoxin Concentrations in Drinking Water Pipes of A Pig Nursery
Previous Article in Journal

Animal welfare labels have been introduced to improve housing conditions in conventional pig systems. Animal welfare should be increased by, e.g. offering a well-accepted and comfortable solid lying area. This study investigates the effect of bright light from an LED spotlight in the slatted area on lying and elimination behavior of fattening pigs. It was tested for two pen designs different in feeder and arrangement of the slatted area with 18 pigs per pen. The study took place in two different compartments (spatial repetition) with two pens of each pen design. The light intensity in the slatted area was increased by two spotlights within one pen of each design as case-control approach. A total of 648 fattening pigs were tested over four and five fattening periods respectively. The lying behavior was assessed by video scan sampling at three different weekdays at three times (morning, noon, evening) on each observation day. On average, the lying area was used by 60–63% of the pigs in the control pens and 67–69% in the spotlight pens. Additionally, a tendential effect of the deviation of the room temperature from the set temperature existed. The fouling of the animals and pen was not affected by the light intensity. View Full-Text
Keywords: lying behavior; pen fouling; fattening pigs; light intensity; solid lying area lying behavior; pen fouling; fattening pigs; light intensity; solid lying area
►▼ Show Figures 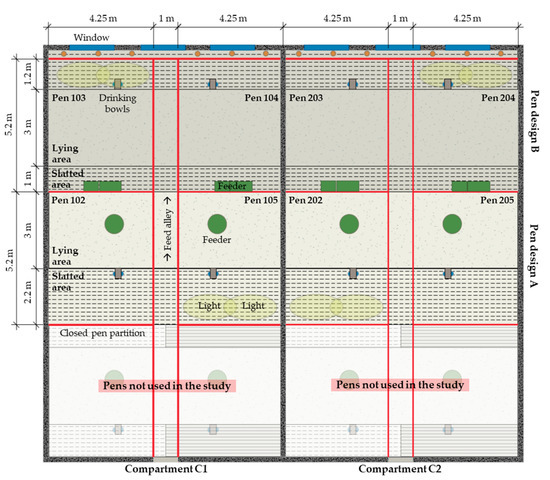