Tourism Competitiveness of Rural Areas: Evidence from a Region in Poland
Previous Article in Journal

Evaluation of Eight Genotypes of Corn for the Commercial Cultivation of Huitlacoche in Nopalucan, Puebla, Mexico
Previous Article in Special Issue

Savings of Small Farms: Their Magnitude, Determinants and Role in Sustainable Development. Example of Poland

Barriers to the Development of Organic Farming: A Polish Case Study

1
Department of Economics, Poznan University of Life Sciences, 60-639 Poznan, Poland
2
Department of Rural Economics, Institute of Rural and Agricultural Development of the Polish Academy of Sciences, 00-330 Warsaw, Poland
*
Author to whom correspondence should be addressed.
Agriculture 2020, 10(11), 536; https://doi.org/10.3390/agriculture10110536
Received: 2 October 2020 / Revised: 2 November 2020 / Accepted: 5 November 2020 / Published: 7 November 2020
(This article belongs to the Special Issue Contemporary Challenges of Agriculture and Rural Areas in the Context of Sustainable Development)

:
The main purpose of this paper is to explore farmers’ opinions on the barriers to the development of organic farming. A survey was carried out with 262 Polish organic farmers in order to classify the barriers to organic farming development into production, and economic aspects, market aspects and institutional and regulatory aspects. As a next step, a detailed analysis was performed of how the farmers view these barriers. According to this study, Polish organic farmers attach greater importance to economic factors than to non-economic ones. Low yields and production volumes are the reason why many farmers see organic farming as being risky. More than 80% and nearly 60% of farmers covered by this study found the production risk to be very high or high, respectively, during and after the conversion period. Most farmers say they intend to continue their organic production activity only if financial support is provided. Nearly one in five farms (18.3%) want to discontinue organic production in future. This is especially true for two types of farming: specialized grazing livestock farms and mixed holdings. The farmers believe that market aspects and institutional and regulatory factors are the key barriers to the development of organic farming. The findings regarding the role of institutional barriers and communications from regulatory institutions, which affect the farmers’ decision-making processes, are of particular importance. In Poland, the main institutional problem is the instability of laws applicable to organic farming, which adds to the farmers’ uncertainty and decision-making risks. The case study of Poland, which is among the emerging markets for organic food, shows that a stable and coherent support policy is a condition for organic-farming development.
Keywords:
organic farming; feedback from farmers; motives behind conversion; development barriers

A two-stage survey procedure was carried out to explore farmers’ opinions on the barriers to the development of the Polish organic farming sector. The first stage, designed to identify the progress in research on barriers to the development of organic farming, reviewed the relevant literature and analyzed the reports and expert assessments from the Ministry of Agriculture and Rural Development and the Inspectorate of Marketable Quality of Agri-food Products (GIJHARS), as well as data from the Research Institute of Organic Agriculture (FiBL) and the International Federation of Organic Agriculture Movements (IFOAM). The second stage was a study based on a standardized survey questionnaire for Polish organic farmers. The assumption was made that the existing farms also include ones which are considering discontinuing or restricting their organic production activity. Thus farmers’ opinions on the barriers to organic farming may help to identify some policy instruments that would prevent the Polish organic farming sector from further decline.
The survey was carried out in 2019 as a CATI (computer assisted telephone interview), based on the concepts and questionnaire forms prepared by the authors. The study sample was composed of 262 farms (upon verification of survey questionnaires) from a total population of 15,470 certified organic farms (as of 2017). The farms complied with the Regulation (EC) No. 834/2007 of 28 June 2007 on the organic production and labeling of organic products. The sample used in this study was representative of the general population of certified organic farms. The farms represented all voivodeships in accordance with the territorial distribution of Polish organic farms.
The sample size formula for a finite population was used to calculate the size of the sample of organic agricultural producers covered by this study: where n is sample size, e is permissible error, N is population size, and Zα is value resulting from the confidence interval used; for a 95% confidence level, Zα = 1.96, and P is the estimated proportion in the population (usually, it is set at P = 50%). P is the estimated expected proportion in the population covered by the study. As the proportion in the population of operators is unknown, the least favorable assumption was made, namely that P = 50%, because at that P level the product P(1 − P) reaches the maximum value.
It is thus assumed that:

The minimum sample size with this data is 262. The stratified random sampling method was used to ensure representativeness across the entire population of organic producers active in Poland. The stratification procedure took account of the number of organic farms located in different voivodeships.
The questionnaire was composed of 27 questions divided into two groups. The first included the basic characteristics of the farms (gender, age, education, farm size, farming experience, farming type). The second part was mostly composed of questions on the barriers to the development of organic farming. The following groups of barriers were identified in the survey questionnaire: production and economic barriers, market barriers, and institutional and regulatory barriers. The farmers were asked to assess the barriers on a Likert scale going from 1 (not important) to 5 (very important) in order to express their opinion on each barrier’s impact on the development of organic farming. The second part of the survey questionnaire also included questions indirectly related to barriers to organic farming, and was about (1) motives behind going organic, (2) assessing the production risk, (3) costs and benefits of organic farming, and (4) assessing the future development opportunities.
The three categories of barriers identified in the questionnaire (production and economic barriers, market barriers, and institutional and regulatory barriers) are partly underpinned by research carried out in other countries among farmers who discontinued their organic farming business. Before starting the survey, when preparing the research procedure and asking the research questions, an assumption was made that factors which contribute to making the farmers discontinue organic farming can be perceived by farmers currently engaged in organic farming as barriers to its development. Getting to know the farmers’ opinions on these barriers could be a major source of information for decision makers in formulating an organic farming development policy designed to decelerate the crisis processes. The authors realize that some other barriers to the development of organic farming might exist, making the vast majority of (conventional) farmers disinterested in going organic. Exploring these farmers’ opinions on the barriers to the development of organic farming is an important research problem, too. The three groups of barriers identified in this paper do not exhaust the list of obstacles to the development of organic farming. Indeed, the survey questionnaire does not include social and information-related barriers. At the end of the questionnaire, the respondents were given the opportunity to express their opinion and comment on other aspects of the study.
More than half of the interviewees were in the 31–54 age bracket (Table 1). Most interviewees had either a secondary (44.3%) or a tertiary (33.2%) education. Farmers with more than ten years’ experience in running an organic farm had the largest share (60.1%). These were mainly farmers who had established their holdings in 2006 or later. One in three farms had an area of 20–50 ha, one in five had an area of 10–20 ha, and one in ten had an area of over 100 ha. The group of organic holdings (both in the study sample and on a countywide basis) included more medium-sized (20–50 ha) and large farms (above 50 ha) than the group of conventional farms.
The survey identified four agricultural types of farms: arable farms, dairy-cows (farms specializing in the rearing of dairy cattle), grazing livestock (farms specializing in the rearing of grass-fed animals), and mixed farms. One in three farms were grazing livestock holdings (30.2%), and the group of arable farms was nearly the same percentage (27.8%). The two other types of farming are mixed farms (23.3%) and dairy-cow farms (18.7%). Around 20% of farms covered by this study were engaged in a non-agricultural activity. 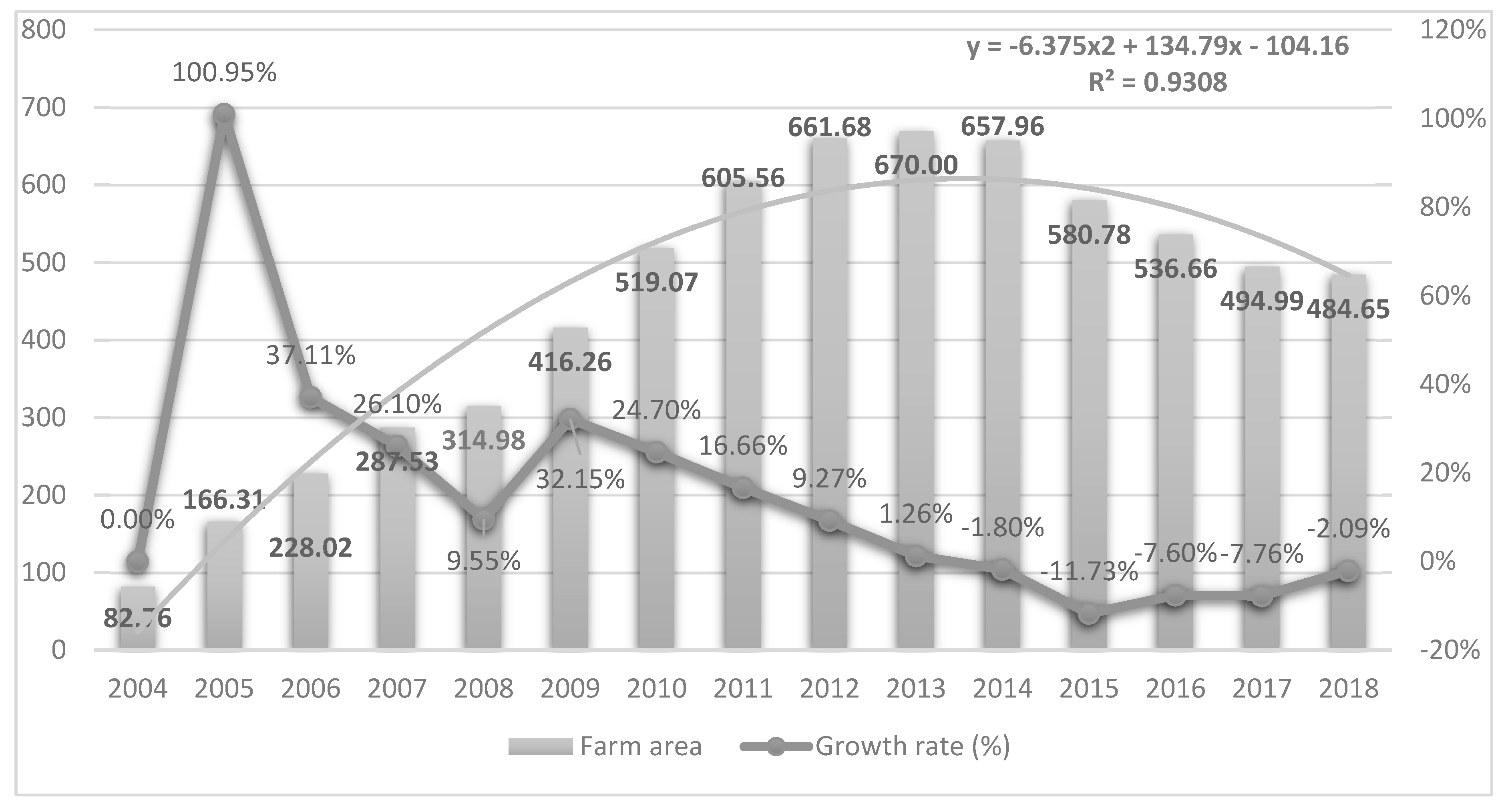