Barriers to the Development of Organic Farming: A Polish Case Study
Next Article in Special Issue

Evaluation of Eight Genotypes of Corn for the Commercial Cultivation of Huitlacoche in Nopalucan, Puebla, Mexico

The infection caused by Ustilago maydis, commonly called huitlacoche, appears in regions of Mexico that produce corn (Zea mays) during seasonal conditions. The infection leads to form galls with high levels of proteins, amino acids, and minerals, providing important benefits to nutrition, and it is also becoming relevant due to its high commercial value, becoming a potential crop for Mexico, Central America, and the United States. The objectives of the present investigation are to evaluate the potential yield per hectare (Kg ha−1) based on the incidence percentage (PI), and severity index (ISE) in eight genotypes of corn, as well as performing proximal chemical analysis and mineral element analysis with the galls obtained via inoculation of the MA-Um1 strain of U. maydis. The experimental unit is made up of eight subgroups of 250 plants here, considering four hybrid and four Creole genotypes of corn used by producers in open fields in Nopalucan, Puebla, Mexico. The Creole creamy-white corn achieved the highest production of huitlacoche (12,759.21 Kg ha−1) here, obtaining an incidence percentage of 73.90%; the highest caloric content (39.90 Kcal per 100 g of fresh mushroom) was recorded in the galls produced from the Asgrow Hawk hybrid, while the highest concentration of zinc (2.33 mg per 100 g) was presented by the AS-722 hybrid. View Full-Text
Keywords: edible fungi; Ustilago maydis; native corn; hybrid corn; productivity edible fungi; Ustilago maydis; native corn; hybrid corn; productivity
►▼ Show Figures 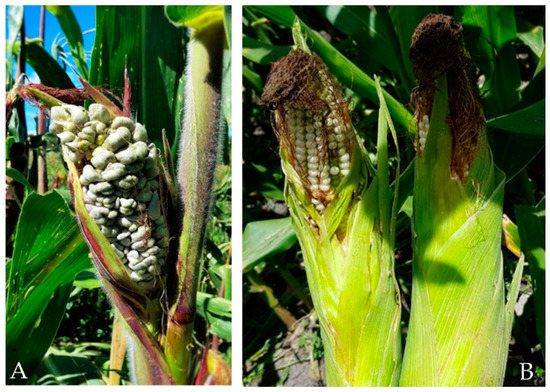