CT Findings in Pulmonary and Abdominal Sarcoidosis. Implications for Diagnosis and Classification
Next Article in Special Issue

To extract acupoint information from randomized controlled clinical trials, we searched the Cochrane Library (www.cochranelibrary.com) using the keyword “acupuncture” in records titled Cochrane Reviews. To ensure a sufficient number of studies of each disease in the frequency analysis, studies involving more than three clinical trials with acupoint information were included. From the retrieved studies, the following features were included for analysis: all relevant diseases, interventions using needle-type acupuncture (manual and electroacupuncture), and all acupuncture regimens (both standardized and semistandardized). Studies were excluded from analysis if they involved interventions with non-needle type acupuncture (e.g., acupressure and laser acupuncture), interventions that were not acupuncture (e.g., moxibustion), or acupuncture trials using only a subset of body areas for treatment (e.g., ears, face, head, or feet). Therefore, a total of 49 CDSR records were retrieved from the Cochran Library, and 30 CDSR records met for our criteria. A total of 421 randomized clinical trials were included for this analysis of a total of 30 diseases (i.e., 63 studies for depression, 30 studies for dysmenorrhea, and 25 studies for lower back pain). To remove possible outliers and include only acupoints with sufficient numbers of prescriptions, acupoints were included if they were used more than 14 times across all studies, for a total of 49 acupoints. To explore the associations between diseases and acupoints, the frequencies of co-occurrences of the 49 acupoints and 30 diseases were extracted (Figure 1).

The specificity of an acupoint indication can be inferred from the observed data, with the probability of disease targeted by a certain acupoint represented as P (Disease | Acupoint). The acupoint indication specificity was defined by reverse inference (i.e., Bayesian inference, the probability that a given disease would be defined as the indication for a certain acupoint), calculated as the frequency selection of that disease divided by the total number of disease selections. Probability values were Z-transformed to assess statistical significance (Z > 1.96).

While conditional probability used in reverse inference helps clarify the probability of diseases in acupoint indications, it does not consider the prior odds of the diseases. To consider the prior probability of the diseases, Bayes factor correction was applied to the reverse inference results. According to Bayes’ theorem, BF is the likelihood ratio of the marginal likelihood of one particular hypothesis to another. We investigated the relative strength of each hypothesis compared with the null hypothesis (e.g., = disease K is highly treated by acupoint L in randomized controlled trials) by assessing BF (θ = data) as below (1).
To determine BF, the odds for the presence of disease when one acupoint is used were qualified by the odds of the prior probability of the disease (i.e., number of acupoints used for disease, the denominator). BF > 3 indicated substantial evidence in favor of the inference.

The acupoint indications were more specific to each disease after correction with BF (BF > 3). Diseases with a high BF score (BF > 3) for acupoints are as follows: insomnia (BF = 3.69) for HT7; depression (BF = 6.36) for EX-HN3; peripheral joint osteoarthritis (BF = 7.60) for GB34; acute ankle sprains (BF = 5.39) for KI3 (Figure 4). The results indicate that few acupoint indications for diseases with greater prior probabilities, such as depression and dysmenorrhea, did not survive the BF correction.

This research was supported by the Basic Science Research Program through the National Research Foundation of Korea funded by the Ministry of Science, ICT & Future Planning (No. 2018R1D1A1B07042313) and the Korea Institute of Oriental Medicine (no. KSN1812181). 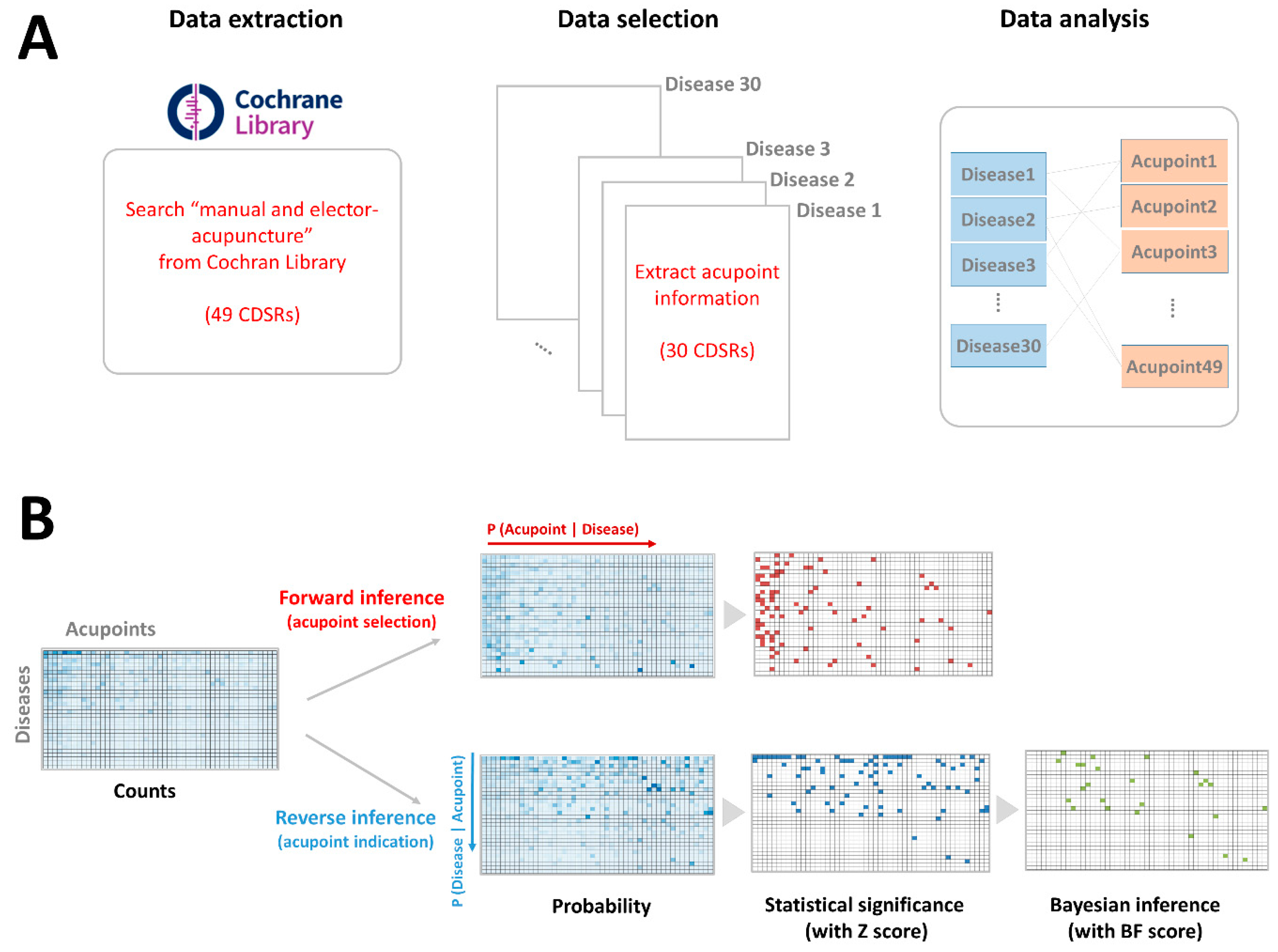 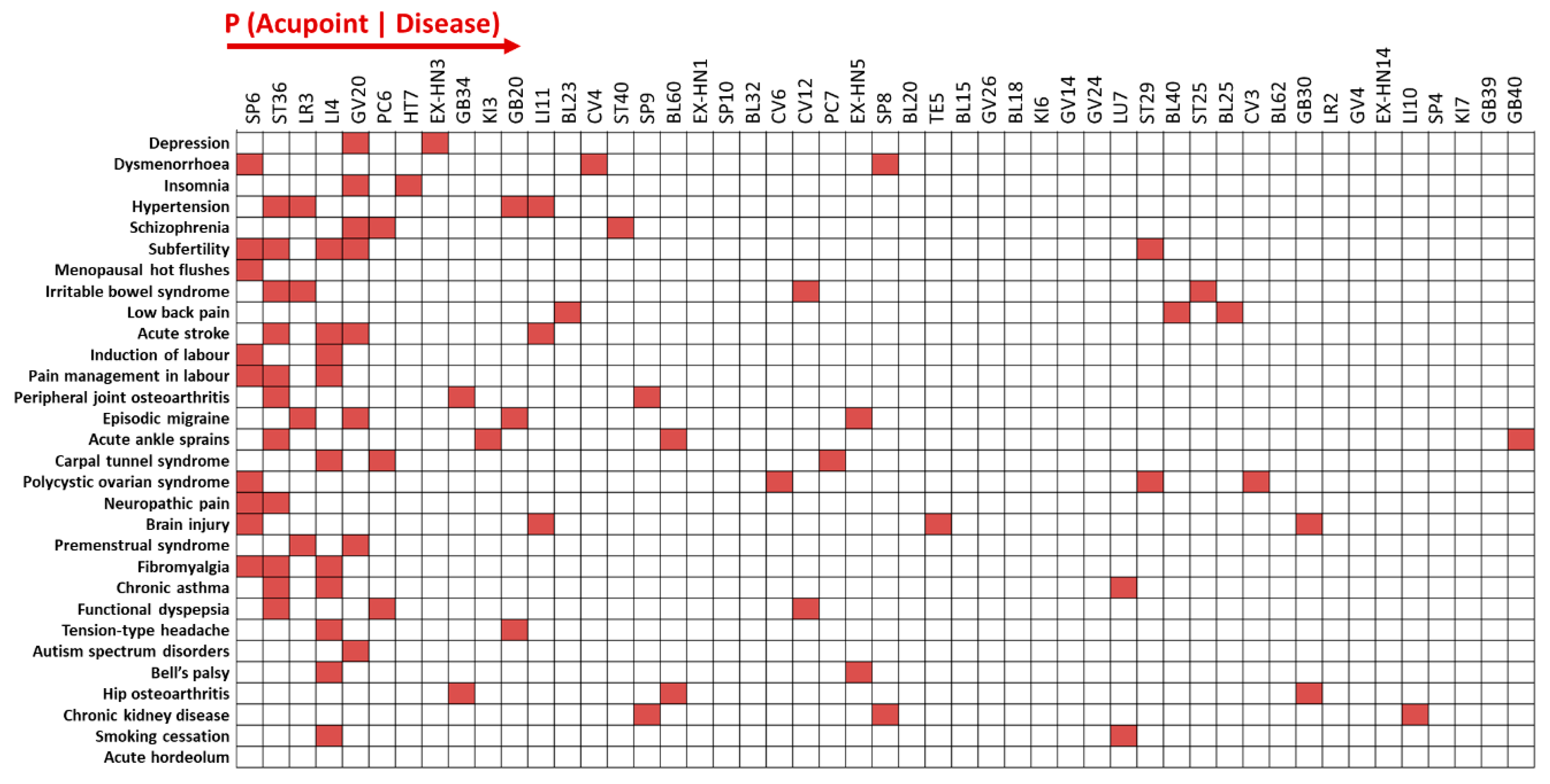