The study was approved by the CEU-San Pablo University Research Ethics Committee, with the approval code: 276/19 (ClinicalTrials.gov Identifier: NCT04412603).

This was a single-blind (evaluator) study, and the sample was randomized by an external person using EPIDAT™ v.4.2. By convenience sampling, children diagnosed with upper OBP (6–12 years old) were recruited from the ADAYO Association (Spain) and its publications in social networks, as well as through the dissemination of this project among different professionals in the field of health and Centers for Child Development and Early Care from different cities of Spain.

The inclusion criteria were ages between 6 and 12 years, upper Erb-Duchenne OBP (C5–C6) and extended Erb-Duchenne (C5–C7), preserved functionality to perform the activities, and adequate cognitive level to complete the proposed activities. The exclusion criteria were: associated pathologies, medical complications or cognitive and/or visual impairment that prevented the child from performing the activities, affected upper limb surgeries in the last year, treatment with botulinum toxin in the last three months, the lack of a device with the Android operating system required for the application of Virtual Reality therapy, and no collaborative families and children.

The protocol was elaborated through the comparison of different protocols used in experimental trials, systematic reviews, and meta-analyses on Mirror Therapy and Virtual Reality in children [40,41,42,43,47]. The intervention protocol was performed at home for four weeks, applying Conventional MT or Virtual Reality MT, three days per week, with 20-min each session.
Before initiating the treatment, a meeting was held with the families, where they were informed about the therapies and the protection of their data, and they signed the informed consent; in this meeting, the families were trained in the execution of the therapies, explaining each activity of the protocol to be conducted at home. A video recording was requested, in which the performance of the different exercises with Conventional MT or Virtual Reality MT was shown, in order to modify or adapt the activities prior to the start of the therapy for each participant if required. Neither therapy was initiated until the families were completely confident about the correct performance of each of the activities.
The families were instructed to build the mirror box according to their preferences (to perform Conventional MT), using cardboard pieces of 15 × 15 cm to fit the midline of the trunk; the mirror view was not covered during the exercises. They were also provided with an instructional video. To perform the virtual reality therapy, the families had to download the Virtual Reality MT app for Android: (https://play.google.com/store/apps/details?id=com.sixdimensions.mirrortherapy&hl=es) and acquire the virtual reality glasses in order to perform the proposed exercises (supplementary video to see the execution of both therapies is attached).
The intervention protocol consisted of 6 exercises (3 forearm prone-supination exercises and 3 wrist flexo-extension exercises), performed through the mirror effect, visualizing the non-unaffected upper limb as if it were the affected arm, with Conventional MT or with Virtual Reality MT using the Virtual Reality MT mobile application with a mirror therapy effect (Table 1). Table 2 shows an example of each session per week.
Both groups carried out the same exercises with the therapy assigned in each case. In the video S1 can be observed the execution of Conventional MT and Virtual Reality MT. Conventional MT: with the affected limb inside the box, the exercises were performed with the non-affected side while looking at the mirror while the affected side was requested to perform the corresponding movement within its possibilities, depending on the exercise being performed with the healthy upper limb (Figure 1).
Virtual Reality MT: the exercises were performed with the non-affected upper limb, which had to be watched constantly with the virtual reality glasses, in order to interpret that this limb corresponded to the affected side and the affected side accompanied the movement within its possibilities (Figure 2).
The follow-up was carried out each week, recording each session and filling an activity log table to ensure that the therapy was carried out correctly. The families and the therapist conducted an on-line tele-observation of the execution of the activities to prevent possible complications. In addition, the parents were requested to write their opinion regarding the performance of each exercise.
It was estimated that the children in the two treatment groups completed 88.7% of the total dose. Such estimation is based on the fact that, in the study by Ferre et al. [48], where bimanual intensive therapy was carried out at home, and the families received an instruction in the treatment execution and a weekly online follow-up, the participants completed 88.7% of dosage (79.8 h of the total 90 h). Therefore, since the intensity of the therapy was lower in the present study, and given that it was implemented at home with the empowerment of families as in the study of Ferre et al. [48], it was determined that the participants of our study reached the minimum dose, which corresponded to a total of 3 h and 50 min of the 4 h of total dose in both protocols (Conventional MT and Virtual Reality MT).

The affected upper limb spontaneous use was assessed by the Children’s Hand-use Experience Questionnaire (CHEQ) [49], which was validated for children in the age range of 6 to 18 years with unilateral affectation or disuse of one of their upper limbs; this questionnaire assesses the experience of children using the affected hand in 29 different bimanual activities of daily living [49]. Other criteria evaluated included whether the child used grasp or support when using the affected hand, the effectiveness of the affected upper limb use, the time to perform the activity compared to a child of the same age with typical development, and whether there was some discomfort when performing the activities of the questionnaire. These concepts were assessed on a score scale of 1 to 4, with 1 point representing “least effective” and 4 points corresponding to “most effective” [49].
CHEQ scales are rated on a four-point ordinal scale and raw scores: higher scores indicate a better grasp, less time taken, and greater satisfaction. Previous investigations have shown acceptable unidimensional and high test-retest reliability (ICC 0.87–0.91) in children with unilateral CP; the results indicate a possible ability to detect change [50].

The quality of life was assessed through the Pediatric Quality of Life Inventory Generic Core Scales, PedsQLTM 4.0 [51]. This is a modular instrument for measuring health-related quality of life in children and adolescents aged between 2 and 18 years. It consists of 23 items applicable to healthy school and community populations, as well as pediatric populations with acute and chronic health conditions. It is divided into 4 domains: Physical, Emotional, Social, and School. The questionnaire consists of two questionnaires to assess the perceived quality of life: a questionnaire for the child or adolescent (self-report) and a questionnaire for the parents. Reliability has been previously demonstrated for children (ICC = 0.86) and parents (ICC = 0.89) [51,52,53].

The statistical analysis of the data was performed using SPSS v20.0 for windows (SPSS Inc., Chicago, IL, USA). Given the small sample size, non-parametric analyses were used. The Mann-Whitney U-test to determine the inter-group differences for the variables and the Wilcoxon test for paired samples was performed to compare the before-after treatment differences in the same group for both therapies. Fisher’s exact test was used to determine inter-group differences according to sex and affected upper limb. The results are shown as the median and interquartile range (IQR) with a confidence interval of 95%. The values with p < 0.05 were considered statistically significant.

A total of 29 subjects were recruited, of whom 17 were excluded (10 of them did not meet the inclusion criteria and another 7 eventually decided not to participate). The remaining 12 subjects met the inclusion criteria established and were randomly allocated in either of the two intervention groups. Six children were included in the Conventional MT group; however, one child did not receive the complete therapy due to surgery and was lost 2 weeks after the intervention in the follow-up. The other six children were allocated in the Virtual Reality MT group; however, one child did not receive the complete therapy due to hospitalization and was lost 1 week after the intervention in the follow-up. A total of 10 children completed the therapies: five children in the Conventional MT and five children in the Virtual Reality MT (Figure 3).
The mean age of the children was 8.42 years (SD: 3.4). There were no statistically significant inter-group differences) according to age (p = 0.9) and sex (p = 1.00), although there were differences in the affected upper limb (p = 0.04). Fifty percent of the total sample were females, and the other 50% were males. In total, 66.7% of the children had the affectation in the right upper limb, while 33.3% had the affectation in the left upper limb (Table 3).
Table 4 shows the individual characteristics of the participants. Nine children were classified as grade II in the Narakas Classification [9,10]. The affected muscles were flexors and external rotators of shoulder, Biceps Brachii and elbow extensors, forearm supinators, and wrist extensors. The muscle segmental strength (assessed in the affected muscles, as was previously mentioned) was grade 3–4+ in the muscular evaluation [54,55], which means that there was muscular contraction capable of overcoming the resistance imposed by gravity (grade 3) and by an external force (grade 4). Seven participants had been infiltrated with Botulinum toxin- A (BTX-A) one year before the intervention and the most frequently infiltrated muscle was the pectoralis major. The risk factors to acquire OBP considered in this study were: newborn weight >4 kg and instrumentalized delivery.

3.1. Primary Results: Spontaneous Use of the Affected Upper Limb (Measured with CHEQ)

Compared to conventional MT, Virtual Reality MT would be a home-based therapeutic complement to increase independent bimanual tasks using grasp in the affected upper limb and improve the quality of life for children diagnosed with upper OBP in the age range of 6–12 years.

We thank all the families and children who participated in this study for their great involvement. 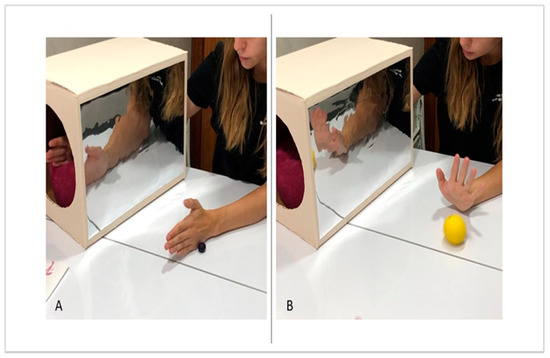 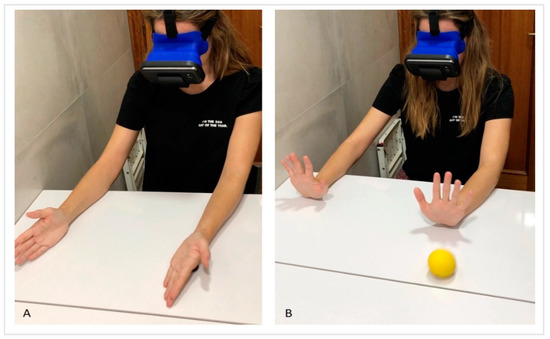 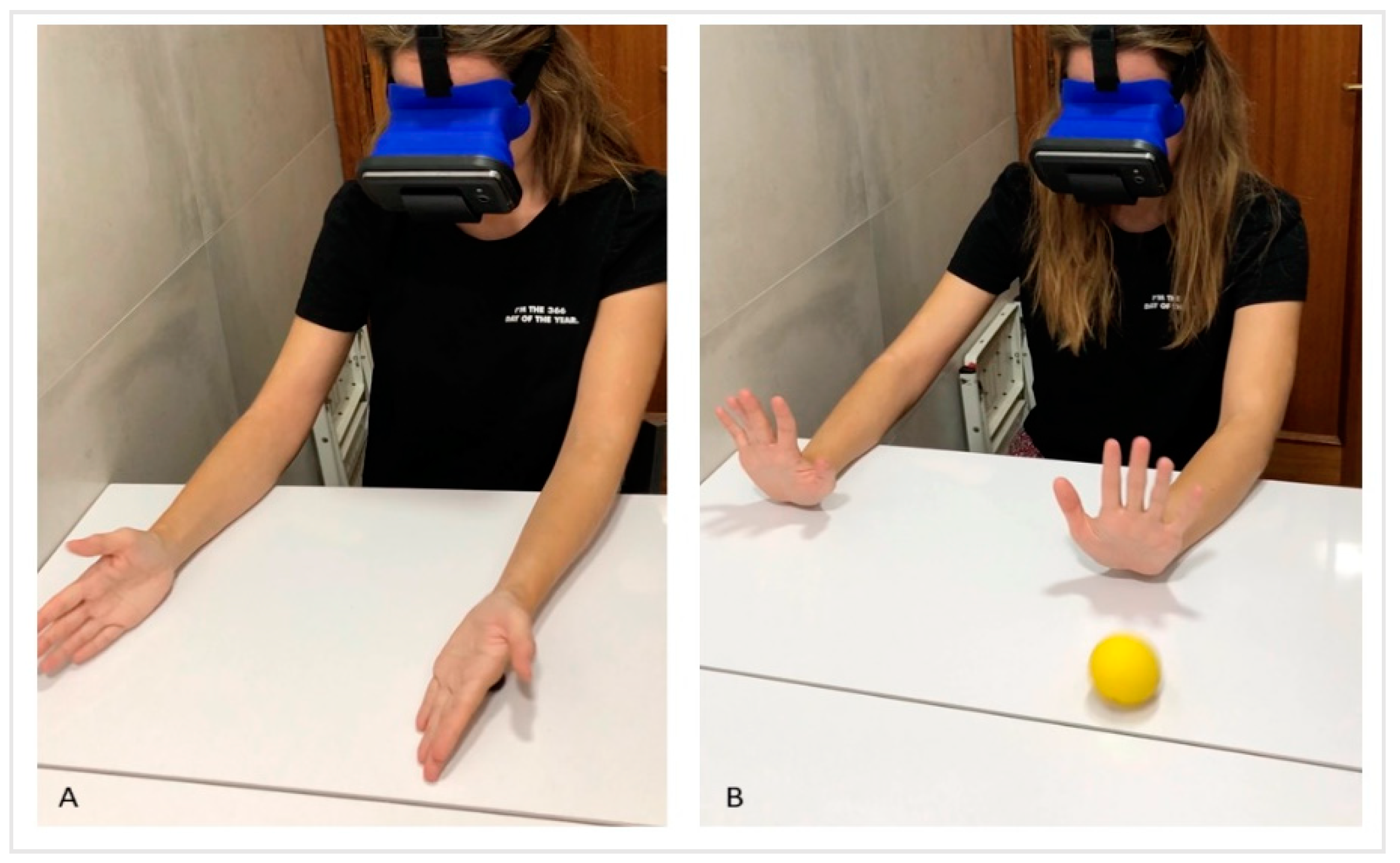 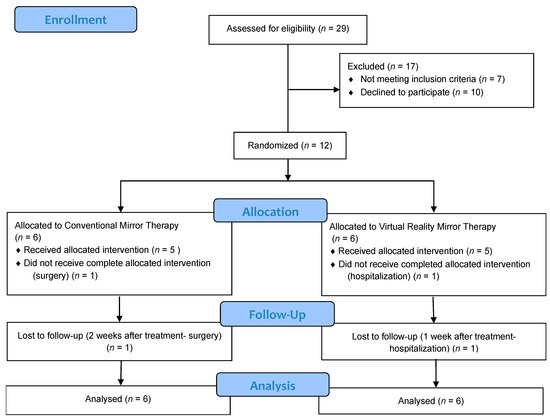 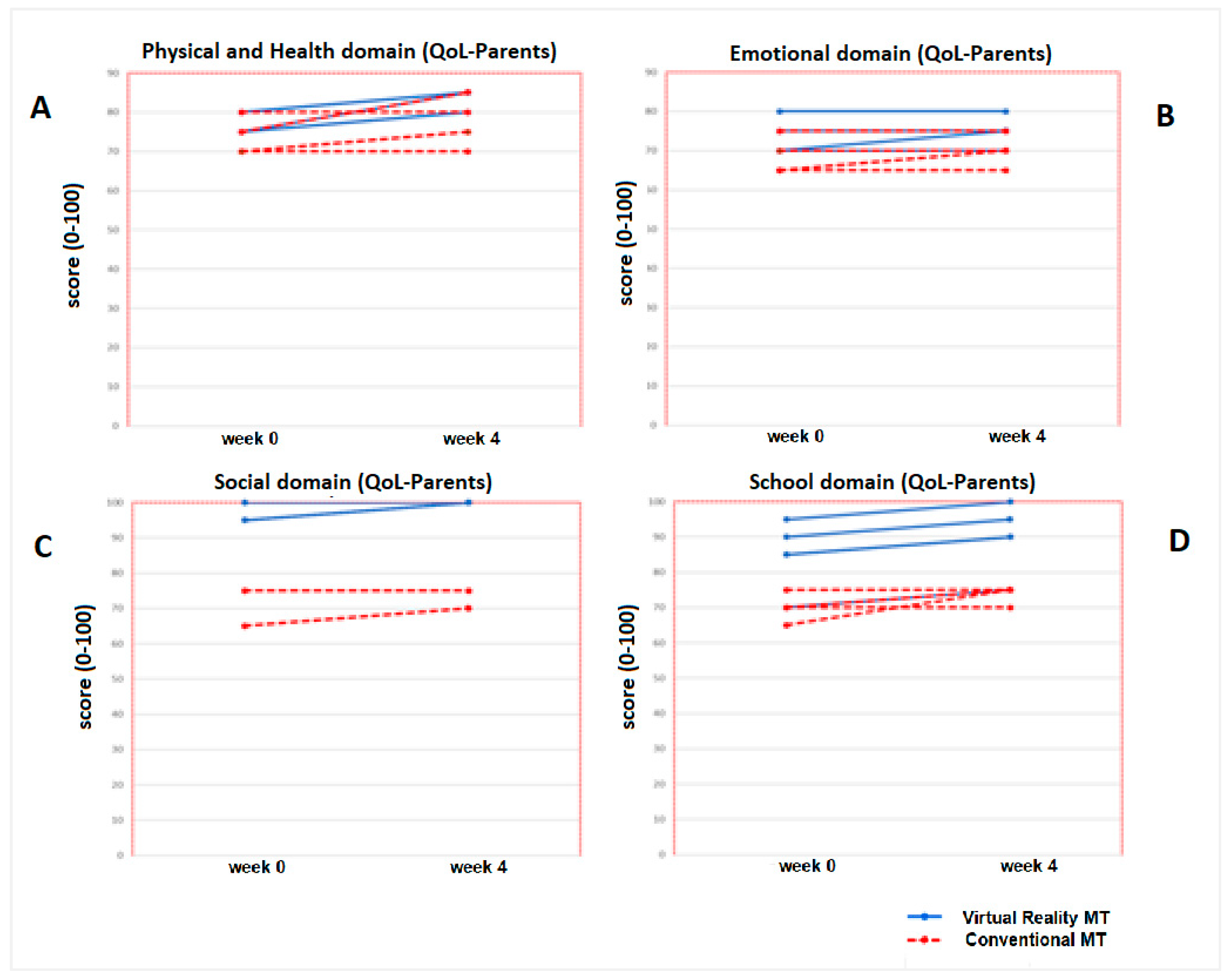 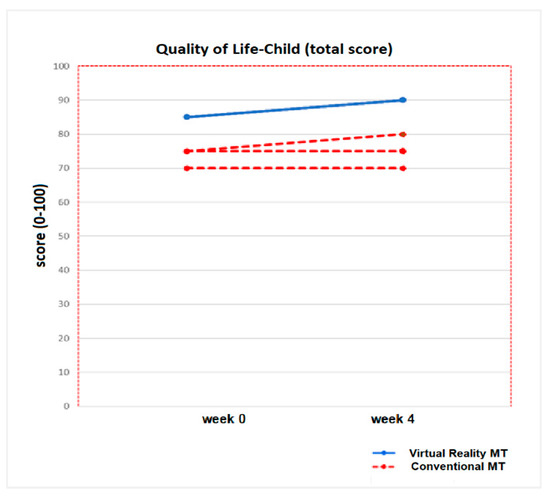 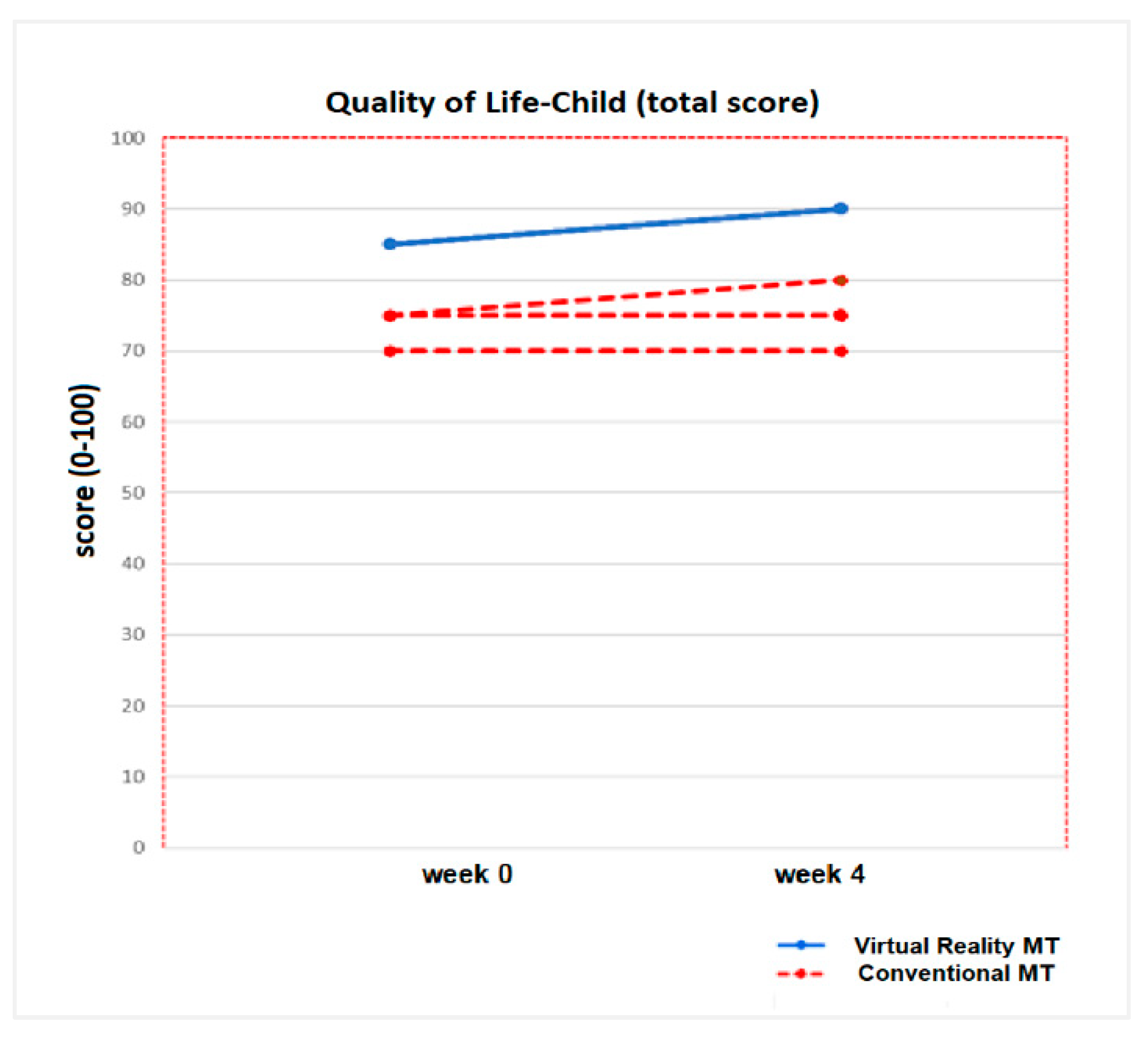 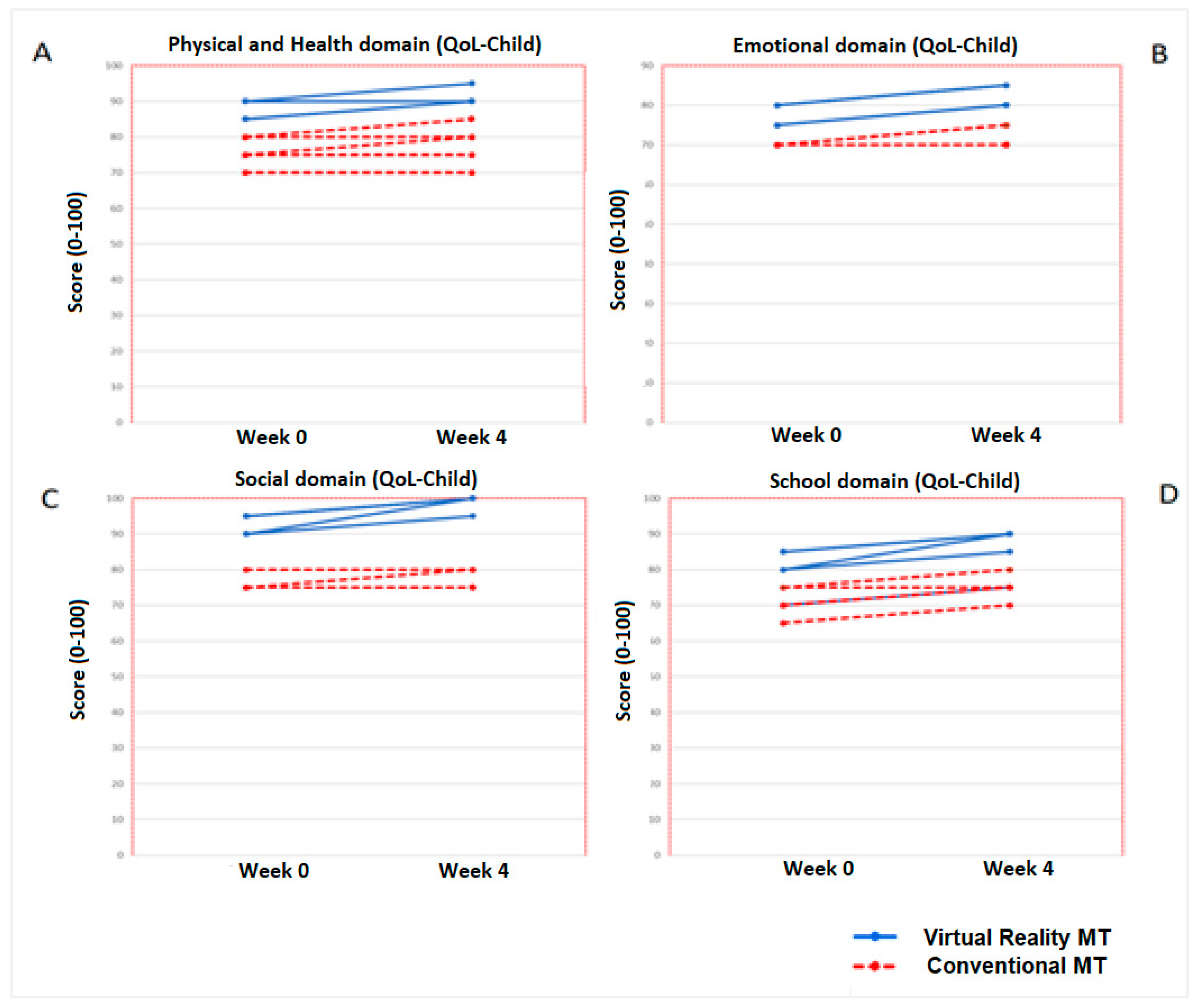