:
Coronavirus disease 2019 (COVID-19) infection causes acute lung injury, resulting from aggressive inflammation initiated by viral replication. There has been much speculation about the potential role of non-steroidal inflammatory drugs (NSAIDs), which increase the expression of angiotensin-converting enzyme 2 (ACE2), a binding target for severe acute respiratory syndrome coronavirus 2 (SARS-CoV-2) to enter the host cell, which could lead to poorer outcomes in COVID-19 disease. The aim of this study was to examine the association between routine use of NSAIDs and outcomes in hospitalised patients with COVID-19. This was a multicentre, observational study, with data collected from adult patients with COVID-19 admitted to eight UK hospitals. Of 1222 patients eligible to be included, 54 (4.4%) were routinely prescribed NSAIDs prior to admission. Univariate results suggested a modest protective effect from the use of NSAIDs, but in the multivariable analysis, there was no association between prior NSAID use and time to mortality (adjusted HR (aHR) = 0.89, 95% CI 0.52–1.53, p = 0.67) or length of stay (aHR 0.89, 95% CI 0.59–1.35, p = 0.58). This study found no evidence that routine NSAID use was associated with higher COVID-19 mortality in hospitalised patients; therefore, patients should be advised to continue taking these medications until further evidence emerges. Our findings suggest that NSAID use might confer a modest benefit with regard to survival. However, as this finding was underpowered, further research is required.
Keywords:
covid-19; SARS-CoV-2; non-steroidal anti-inflammatory drugs; NSAIDs

The pattern of acute lung injury seen in severe acute respiratory syndrome coronavirus 2 (SARS-CoV-2) infection—commonly referred to as coronavirus disease 2019 (COVID-19)—is thought to be a result of aggressive inflammation initiated by viral replication; however, the exact pathophysiology behind this phenomenon remains largely unknown [1]. Following recognition that the angiotensin-converting enzyme 2 receptor (ACE2) serves as a binding site for SARS CoV-2 to enter the host cell, a number of European authorities, including those in France and Belgium, issued federal reports suggesting that the use of non-steroidal inflammatory drugs (NSAIDs) in the presence of COVID-19 might adversely affect patients’ clinical course and recovery [2]. There remains, however, a considerable uncertainty regarding the use of common NSAIDs and their effect on COVID-19.
NSAIDs are one of the most commonly prescribed and used pain medications worldwide, for both acute pain and chronic conditions such as rheumatological diseases and osteoarthritis [3,4], with analgesic, anti- inflammatory and anti-pyretic properties. The risks of NSAID use have been well studied in the general population, with particular focus on the association between their long-term use and increased risk of upper gastrointestinal effects (e.g., ulceration, bleeding), renal impairment and arterial thrombotic events (e.g., myocardial infarction, stroke) [4]. It has been speculated that ibuprofen may upregulate the cellular expression of ACE2 [5], and in the context of COVID-19, it is therefore postulated that NSAID use could result in a higher viral infective load in the respiratory tract. More recent work has also associated NSAIDs with high complication rates (effusion, empyema, dissemination of infection) after acute respiratory tract infection [6,7], via NSAID-mediated cyclo-oxygenase (COX) inhibition. It has been proposed that the inhibition of COX enzymes reduces the recruitment of polymorphonuclear cells and inhibits the synthesis of lipoxins and resolvins, ultimately delaying the resolution of inflammation.
However, there exists a conflict of opinion within the literature with regard to coronaviruses, and very little research has been conducted to date. In vitro studies of the earlier SARS-CoV infection in animal models and human lung epithelium found indomethacin to have potent antiviral activity by inhibiting viral RNA synthesis [8], an effect that was independent of COX inhibition. Whilst the anti-inflammatory properties of NSAIDs are well known, it is unclear what, if any, their effect is on outcomes in patients with acute respiratory tract infection.
Available published evidence describing outcomes for patients with COVID-19 infection who are NSAID users is specifically lacking. The primary aim of this study is therefore to examine the association between prior routine use of NSAIDs and mortality and length of stay in patients with COVID-19 admitted to hospital.

The study population was drawn from the COPE (COVID-19 in Older People) study [9]. The COPE study is a multicentre, observational study governed by the Older Persons Surgical Outcome Collaborative (OPSOC; www.opsoc.eu), our existing academic network of clinical centres. OPSOC runs a well-established programme of research with experience in collecting epidemiological data for both academic and service evaluation purposes. In the current study, a total of eight UK centres were included. They were all involved in the delivery of unscheduled, in-patient treatment to patients with COVID-19. Data were gathered between 6 March and 28 April 2020. Patient outcomes were up to 28 April 2020. A detailed description of the study protocol and data collection methods has been previously reported [9].
In brief, data collection was undertaken prospectively using a standardised, computerised case report. This was populated after reviewing patients’ individual paper records, prescription administration records and information from electronic records. Each site’s principal investigator supervised the study personnel collecting data at a local level, all of whom had completed data collection training prior to their involvement in the study. Data were recorded securely at each site by adherence to data protection policy, and collated data were ultimately transferred in an anonymised format to King’s College London for statistical analysis.

Patients aged 18 years or older who were admitted to hospital with a clinical or laboratory confirmed diagnosis of COVID-19 were included. Clinical diagnoses were made by clinicians at each site, based on signs, symptoms and/or radiological appearance consistent with COVID-19, whilst laboratory-confirmed diagnoses required positive PCR results from a swab test for SARS-CoV-2. There were no exclusion criteria.

Data on the use of NSAIDs, including the number, type and dose of anti-inflammatory that each patient was taking prior to admission, were collected from admission records and from online GP prescription records. NSAIDs included in the data collection were: propionic acid derivatives such as ibuprofen and naproxen, diclofenac, an acetic acid derivative and selective COX-2 inhibitors such as celecoxib. Topical NSAIDs such as ibuprofen gels were not included due to their low level of systemic absorption and consequential limited systemic effects [10,11]. Low-dose aspirin was not included as an NSAID in our data collection, as although it is a COX inhibitor, its effects are primarily anti-platelet at low doses, with minimal anti-inflammatory effects. History of coronary artery disease was included in the covariate data collection and adjusted for; the majority of these patients were taking aspirin.

Baseline demographic and clinical characteristics were compared by in-hospital mortality status and NSAID consumption versus lack of it. Time-to-event outcomes (death or discharge) were analysed with mixed-effects multivariable Cox’s proportional baseline hazards models. The analyses were fitted with a random intercept to account for hospital variation and adjusted for the base model of: NSAID prescribed (yes/no), patient age group, sex, smoking status, CRP levels, diabetes, hypertension, coronary artery disease, reduced renal function (eGFR < 60). The adjusted hazard ratios (aHR) were estimated with associated 95% confidence intervals (95% CI). The baseline proportionality assumption was tested visually with log-log residuals. Each time-to-event analysis was reported with a Kaplan–Meier survival plot. Day 7 mortality was analysed using a mixed-effects multivariable logistic model, fitting each hospital as a random intercept effect, and adjusted with covariates consistent with the time-to-event analyses. The adjusted odds ratios (aOR) were estimated and presented with corresponding 95% confidence interval (95% CI). Missing data were explored for patterns of missingness. Subgroup analyses were carried out to explore potentially moderating effects of NSAID use within different subgroups stratified by age group, sex, smoking status, diabetes, hypertension, coronary artery disease and renal impairment. Analysis was carried out using Stata version 15 [12]; Kaplan–Meier survival plots were visualised in R [13], with packages survival [14] and survminer [15].
Permission to undertake the study was received from The Health Research Authority (20/HRA/1898); Cardiff University acted as study sponsor. 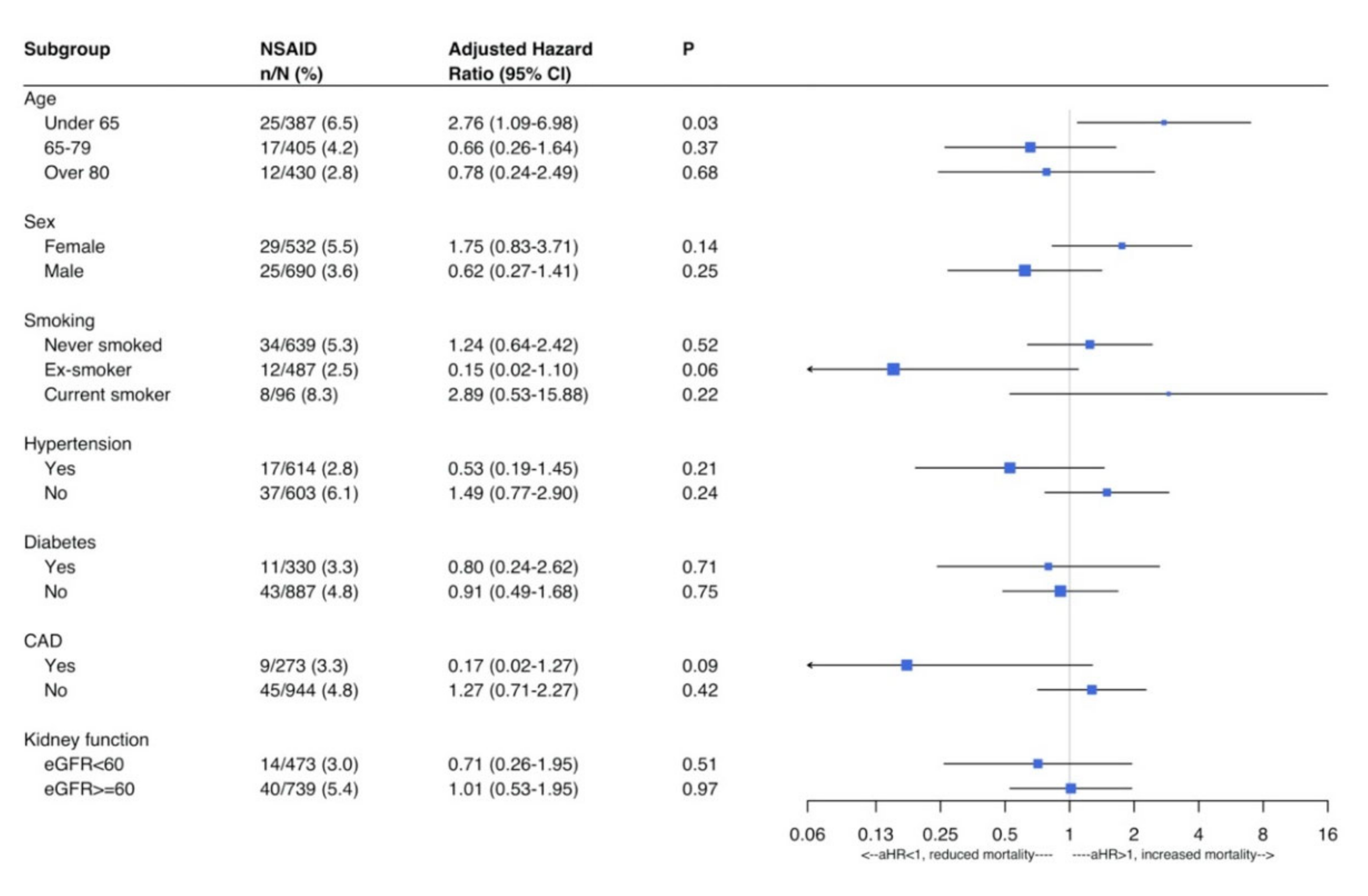 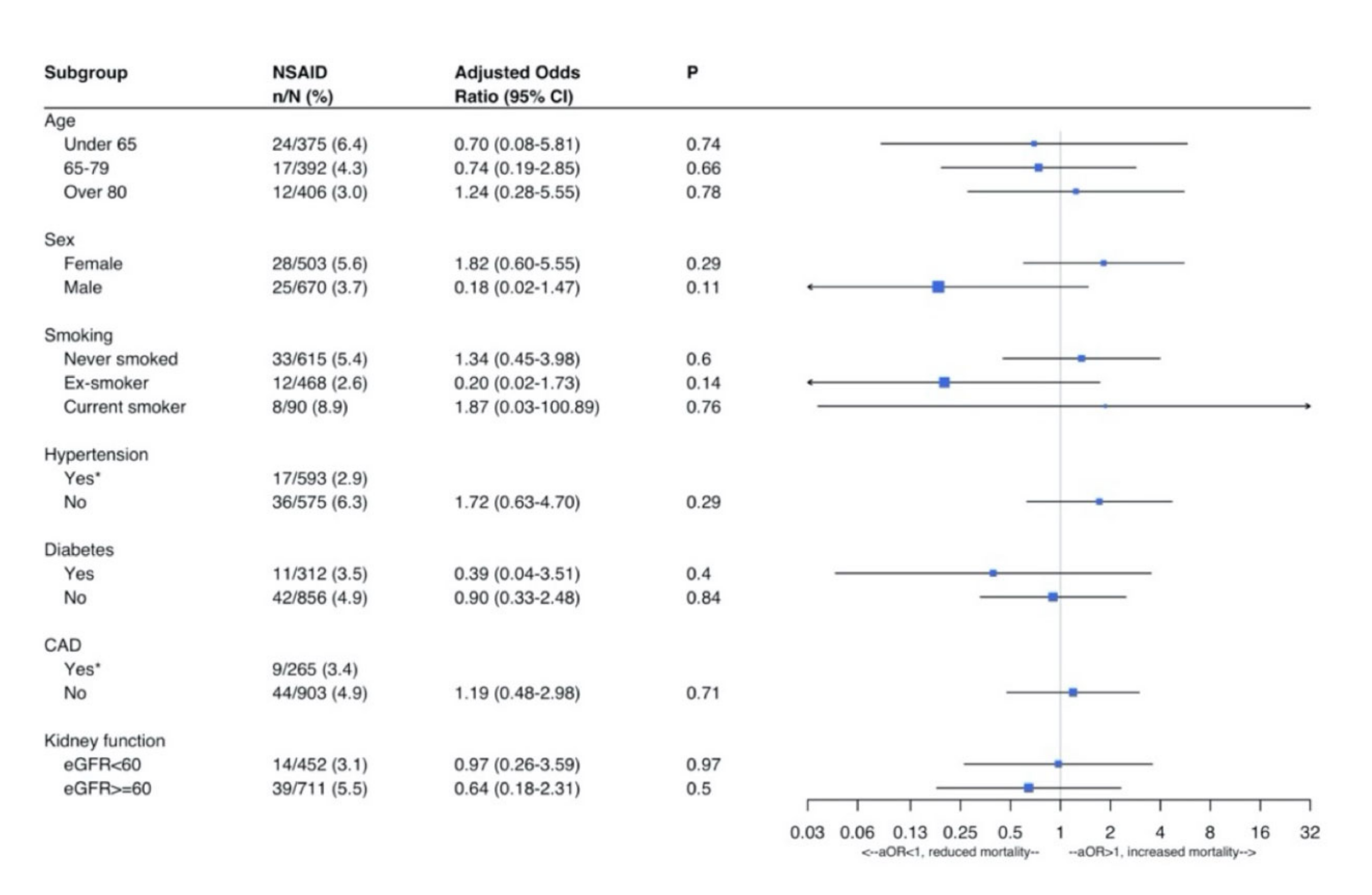 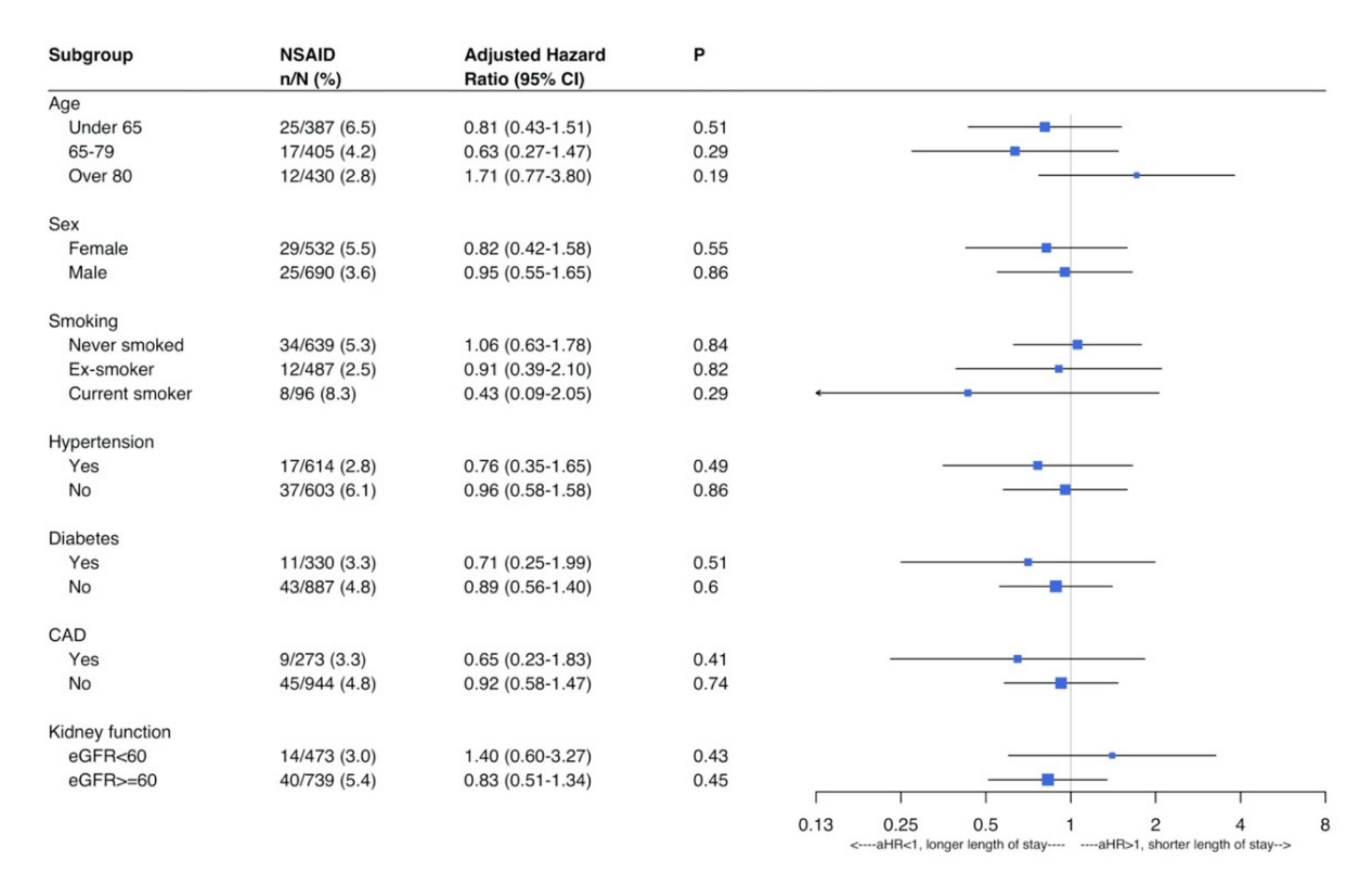