Recurrent high-grade glioma (HGG) remains incurable with inevitable evolution of resistance and high inter-patient heterogeneity in time to progression (TTP). Here, we evaluate if early tumor volume response dynamics can calibrate a mathematical model to predict patient-specific resistance to develop opportunities for treatment adaptation for patients with a high risk of progression. A total of 95 T1-weighted contrast-enhanced (T1post) MRIs from 14 patients treated in a phase I clinical trial with hypo-fractionated stereotactic radiation (HFSRT; 6 Gy × 5) plus pembrolizumab (100 or 200 mg, every 3 weeks) and bevacizumab (10 mg/kg, every 2 weeks; NCT02313272) were delineated to derive longitudinal tumor volumes. We developed, calibrated, and validated a mathematical model that simulates and forecasts tumor volume dynamics with rate of resistance evolution as the single patient-specific parameter. Model prediction performance is evaluated based on how early progression is predicted and the number of false-negative predictions. The model with one patient-specific parameter describing the rate of evolution of resistance to therapy fits untrained data (). In a leave-one-out study, for the nine patients that had T1post tumor volumes ≥1 cm3, the model was able to predict progression on average two imaging cycles early, with a median of 9.3 (range: 3–39.3) weeks early (median progression-free survival was 27.4 weeks). Our results demonstrate that early tumor volume dynamics measured on T1post MRI has the potential to predict progression following the protocol therapy in select patients with recurrent HGG. Future work will include testing on an independent patient dataset and evaluation of the developed framework on T2/FLAIR-derived data. View Full-Text
Keywords: mathematical model; response prediction; high-grade glioma; patient-specific mathematical model; response prediction; high-grade glioma; patient-specific
►▼ Show Figures 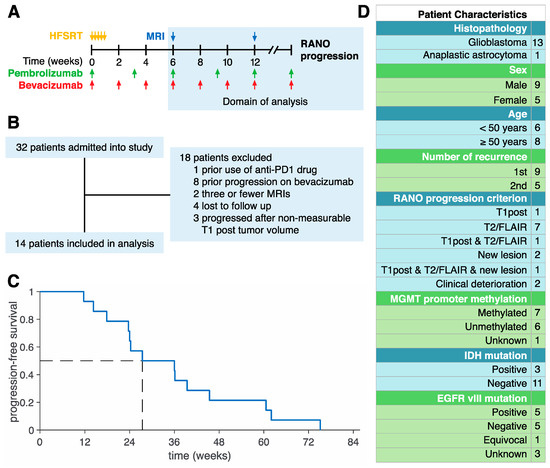