In this case control study, we examined the retinal thickness of the different layers in the macular region and peripapillary retinal nerve fiber layer (RNFL) with optical coherence tomography (OCT) in healthy cognitive subjects (from 51 to 74 years old) at high genetic risk for developing Alzheimer’s disease (AD). Thirty-five subjects with a family history of Alzheimer disease (AD) (FH+) and ApoE ɛ4 carriers and 29 age-matched control subjects without a family history of AD (FH−) and ApoE ɛ4 non-carriers were included. Compared to FH− ApoE ɛ4 non-carriers, in FH+ ApoE ɛ4 carriers, there were statistically significant decreases (p < 0.05) in (i) the foveal area of mRNFL; (ii) the inferior and nasal sectors in the outer and inner macular ring in the inner plexiform layer (IPL); (iii) the foveal area and the inferior sector in the outer macular ring in the inner nuclear layer (INL); and (iv) the inferior sector of the outer macular ring in the outer plexiform layer (OPL). However, no statistically significant differences were found in the peripapillary thickness of RNFL between both study groups. In subjects with cognitive health and high genetic risk for the development of AD, initial changes appeared in the macular area. OCT could be a promising, cost-effective and non-invasive test useful in early AD, before the onset of clinical symptoms.
Keywords: Alzheimer´s disease; ApoE ɛ4; first-degree family history; genetic risk; OCT; retina Alzheimer´s disease; ApoE ɛ4; first-degree family history; genetic risk; OCT; retina

One of the main genetic risk factors for developing sporadic Alzheimer’s Disease (AD) is having a first-degree family history of the disease [1], another major genetic risk factor is mediated by ApoE [2]. This gene has been implicated in modulating the metabolism and aggregation of Aβ [3]. There are three alleles of APOE, ɛ2, ɛ3 and ɛ4, and they encode for apolipoprotein E (ApoE) [4]. ApoE4 increases the risk of AD by three times per ɛ4 allele, with the risk being highest among people of European descent [5]. Moreover, the mean age at the clinical onset of AD has been estimated at 68 years for ɛ4 homozygotes and 76 years for ɛ4 heterozygotes [6]. Although genetics is not included in the research framework because the gene variants do not measure pathological changes or indicate any particular stage of AD [7], ApoE ɛ4 has been reported to affect magnetic resonance imaging (MRI), cerebrospinal fluid (CSF) and cognitive biomarkers [8], and it may have intrinsic effects on brain function [9]. In addition, ApoE ɛ4 plus high levels of amyloid beta (Aβ) proteins are associated with episodic memory decline and high risk for clinical AD [10], and ApoE ɛ4 carriers are also more vulnerable to environmental factors [11].
For years, changes in subjects at high risk of developing AD have been studied [12,13,14,15,16]. Casual findings such as the presence of white matter hyper-intensities, vascular abnormalities and the loss of brain volume have been reported in some MRI studies [12,17]. In magnetoencephalographic (MEG) studies, the functional connectivity of cognitively healthy subjects at high risk of AD showed areas where this connectivity decreased and others where it improved. In these areas between the precuneus and the bilateral inferior parietal lobes, in which there is more activity, they have a neuronal hyper-synchronization that can be explained as an early abnormal excitatory response by the effect of Aβ accumulation [18]. Previously, it has been reported that neurons near amyloid plaques become hyperactive [19], showing a decrease in synaptic inhibition as a possible cause of hyperactivity. It is known that signs of dementia can appear decades before clinically detectable symptoms [20,21]. For all these reasons, interest in finding new biomarkers of the disease has focused on earlier stages of AD [22], searching for less invasive methods and easily accessible tissues such as the retina [23,24].
There is a clear link between retinal and cerebral changes in AD [23]. In preclinical and prodromal stages, retinal changes have also been reported in the optical coherence tomography (OCT) [25,26], as well as the existence of associations between quadrant-specific retinal nerve fiber layer (RNFL) thickness and the brain regions analyzed by 3T MRI [27].
The aim of this work was to analyze by OCT the existence of possible structural changes in the retina, both in the macular and in the peripapillary area, in subjects with two marked genetic risk factors for AD: first-degree family history of AD and being carrier of at least one ɛ4 allele for the ApoE gene.

“The cognitive and neurophysiological characteristics of subjects at high risk of developing dementia: a multidimensional approach” (COGDEM study) was conducted in different centers including the Centre for Biomedical Technology (CBT), the San Carlos Clinical Hospital in Madrid (HCSC), the Ramon Castroviejo Institute of Ophthalmic Research (IIORC) in the Complutense University of Madrid (UCM), Spain. All the study participants provided written informed consent. The research followed the tenets of the Declaration of Helsinki, and the study was approved by the local Ethics Committee (HCSC) with the internal code 18/422-E_BS.
We analyzed two groups: subjects with a family history of AD (FH+) and their respective controls. The group (FH+) was made up of middle-aged subjects with at least one parent with sporadic AD. Their clinical records should not show a history of neurological or psychiatric disorders or suffering from a serious medical condition. To verify the parent’s diagnosis of AD, a multidisciplinary diagnostic consensus panel reviewed the parent’s medical records. Experts at the HCSC reviewed the diagnostic procedures to select only those diagnoses that were made under internationally accepted criteria. Although autopsy reports verified by a pathologist were welcome, this may not be an inclusion criterion since this procedure was not performed in most AD patients. Families with known autosomal dominant mutations (i.e., preseniline-1 or 2) were not included. As controls for the FH+ group, we selected middle-aged subjects in whom the absence of a first-degree family history of AD (FH−) was determined through the participant’s self-report in response to a detailed medical history questionnaire. This FH− group was matched with the FH+ group in terms of age, socioeconomic status and other demographic characteristics. In addition, no previous history of neurological or psychiatric disorder or any serious medical condition was an inclusion criterion for this sample. Both the FH+ and FH− groups showed normal scores (above 26) on the Mini Mental State Examination (MMSE). They also showed normal MRI with no evidence of brain lesion or pathology.
Because approximately 15% of the general population carries ApoE ɛ4, we decided to include this genetic factor as a covariate in our study. For the analysis of ApoE genotyping, DNA was extracted from 10 mL blood samples in ethylenediaminetetraacetic acid from the FH+ and FH− subjects. ApoE was detected using TaqMan assay technology on an Applied Biosystems 7500 Fast Real-Time PCR machine (Applied Biosystems, Foster City, CA, USA). ApoE alleles were determined by analyzing two single-nucleotide polymorphisms (SNPs), rs7412 and rs429358 genotypes, with TaqMan Genotyping Assays (C____904973_10 and C___3084793_20, respectively).

We reviewed the COGDEM study database, which consists of 251 patients. In our study, none of the subjects could have an ophthalmological pathology that could modify the measures by OCT, and for this reason we performed a phone screening with all the patients to assess their ophthalmological history. The questions are shown in Table 1. Forty-four subjects refused to participate, and seventeen had ocular pathology.

All remaining participants (n = 190) were examined in the clinic of the Ramon Castroviejo Institute of Ophthalmic Research, where an eye examination was performed. For the study, one eye of each patient was randomly selected. The visual exam included visual acuity, slit-lamp examination, applanation tonometry (Perkins MKII tonometer, Clement Clarke International, Essex, England), a dilated fundus and an OCT examination (Heidelberg Engineering, Heidelberg, Germany).
In addition to the general inclusion criteria, all the participants met the ophthalmological inclusion criteria listed in Table 2.
Of these 190 subjects, after the ophthalmological examination, we excluded 60 participants for different ophthalmologic pathologies or conditions that were unknown for them. Finally, the remaining 130 patients were divided into 57 FH+ ApoE ɛ4 non-carriers, 35 FH+ ApoE ɛ4 carriers, 29 FH− ApoE ɛ4 non-carriers and 9 FH− ApoE ɛ4 carriers. Since in our study we considered being an ApoE ɛ4 carrier as inclusion criteria, 35 FH+ ApoE ɛ4 carriers and 29 FH− ApoE ɛ4 non-carriers (control group) participated, being a total of 64 adults aged between 51 and 74 years (Figure 1).

OCT images were captured with Spectralis OCT (Heidelberg Engineering, Heidelberg, Germany). Spectralis Glaucoma Module Premium Edition was used, which offers an anatomic positioning system (APS) based on two fixed points: the center of the fovea and the center of Bruch’s membrane opening (BMO). At the optic nerve head (ONH), a 4-line high-resolution radial scan and three-circle scans, both centered on BMO, were acquired to provide highly reproducible RNFL thickness results. In the macular area, which was centered on the APS of Glaucoma Module Premium, 121 dense B-scans were performed per eye.
The total thickness of the retina and the thickness of each retinal layer in the macular area were measured with Heildelberg segmentation software (Heidelberg, Germany, version 1.10.4.0). This segmentation was checked by the same optometrist (IL-C) and modified manually if required. The thicknesses of the following layers of the retina were analyzed: retinal nerve fiber layer (RNFL), ganglion cell layer (GCL), inner plexiform layer (IPL), inner nuclear layer (INL), outer plexiform layer (OPL), outer nuclear layer (ONL) and retinal pigment epithelium (RPE) (Figure 2C). The inner and outer macular rings were analyzed according to the standard Early Treatment Diabetic Retinopathy Study (ETDRS) macular grid (a foveal area of 1 mm of diameter, 1–3 mm around the fovea in the inner ring and 3–6 m for the outer ring) [28] (Figure 2A). Peripapillary RNFL (pRNFL) thickness was measured in six sectors (nasal, supero-nasal, infero- nasal, temporal, supero-temporal, infero-temporal), also obtaining an average over all sectors (Global) (Figure 2B). Good-quality scans were considered with a signal-to-noise ratio >30 and 95% accepted A-Scans. According to the calibration provided by the manufacturers, the measurements were given in microns. Both eyes of each subject were scanned, but only one eye of each participant was used in this study. The scans were obtained after pharmacological mydriasis at under room light conditions.

Statistical analysis was carried out in SPSS 25.0 (SPSS Inc., Inc., Chicago, IL, USA). The distribution of the sample was analyzed using visual methods including histograms, Q-Q plot graphics as well as Kolmogorov–Smirnov and Shapiro–Wilk normality tests.
Data are reported as the median (interquartile range). The differences between the study groups (FH+ ApoE ɛ4 carriers and FH− ApoE ɛ4 non-carriers) were analyzed using a Mann–Whitney U Test. For the analysis of qualitative variables, a chi-squared test was used. A p value ≤ 0.05 was considered statistically significant.

In the pRNFL, the comparison between the FH+ ApoE ɛ4 carriers with respect to the FH− ApoE ɛ4 non-carriers showed no statistically significant thickness differences in any of the sectors analyzed. However, in the FH+ ApoE ɛ4 carrier group, while a slight decrease was found in the superior nasal, inferior temporal and temporal sectors, a slight increase was observed in the nasal and nasal inferior sectors with respect to the FH− ApoE ɛ4 non-carrier group (Figure 4). 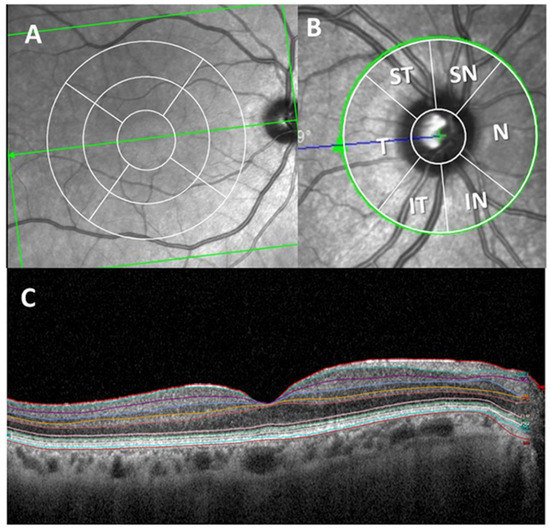 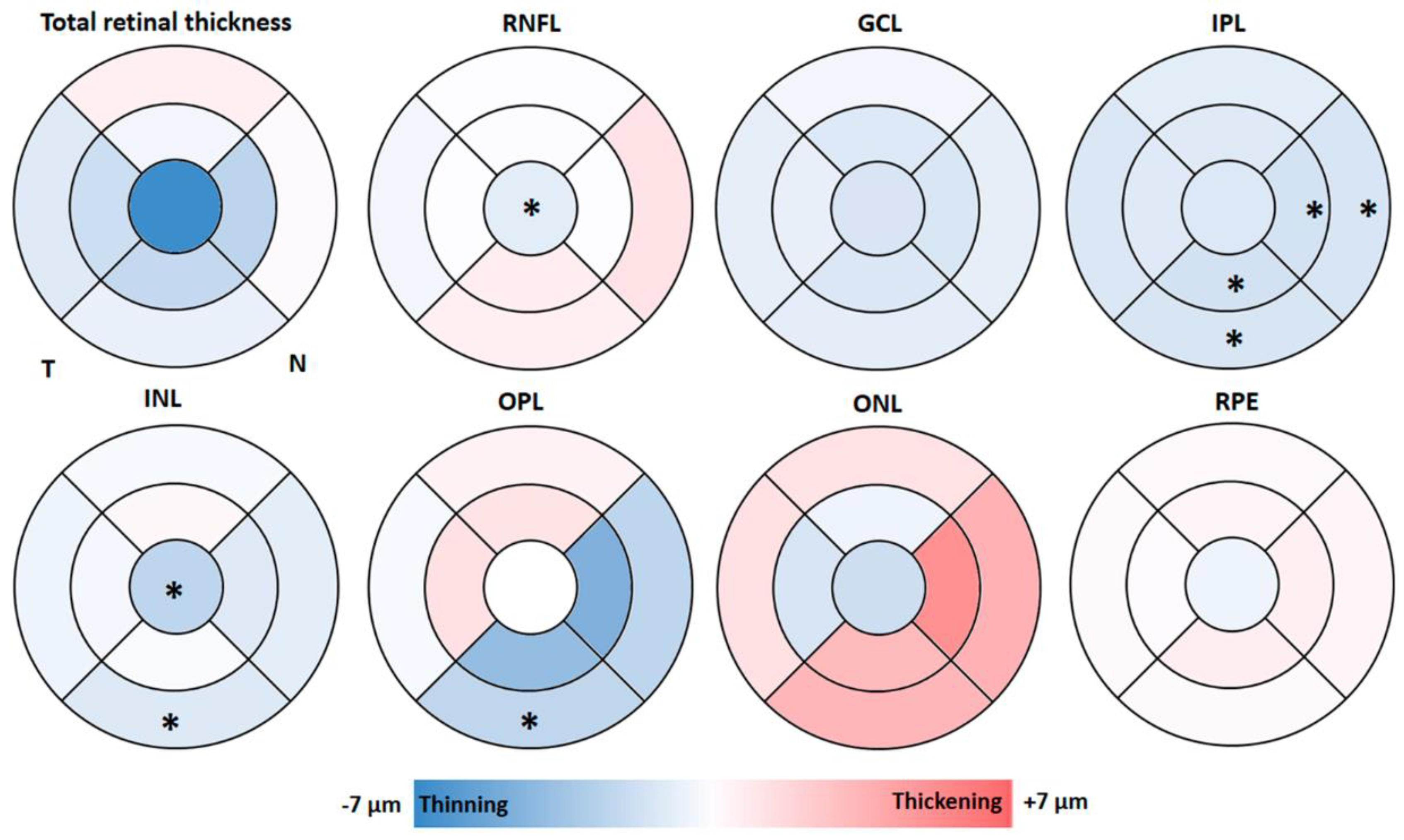 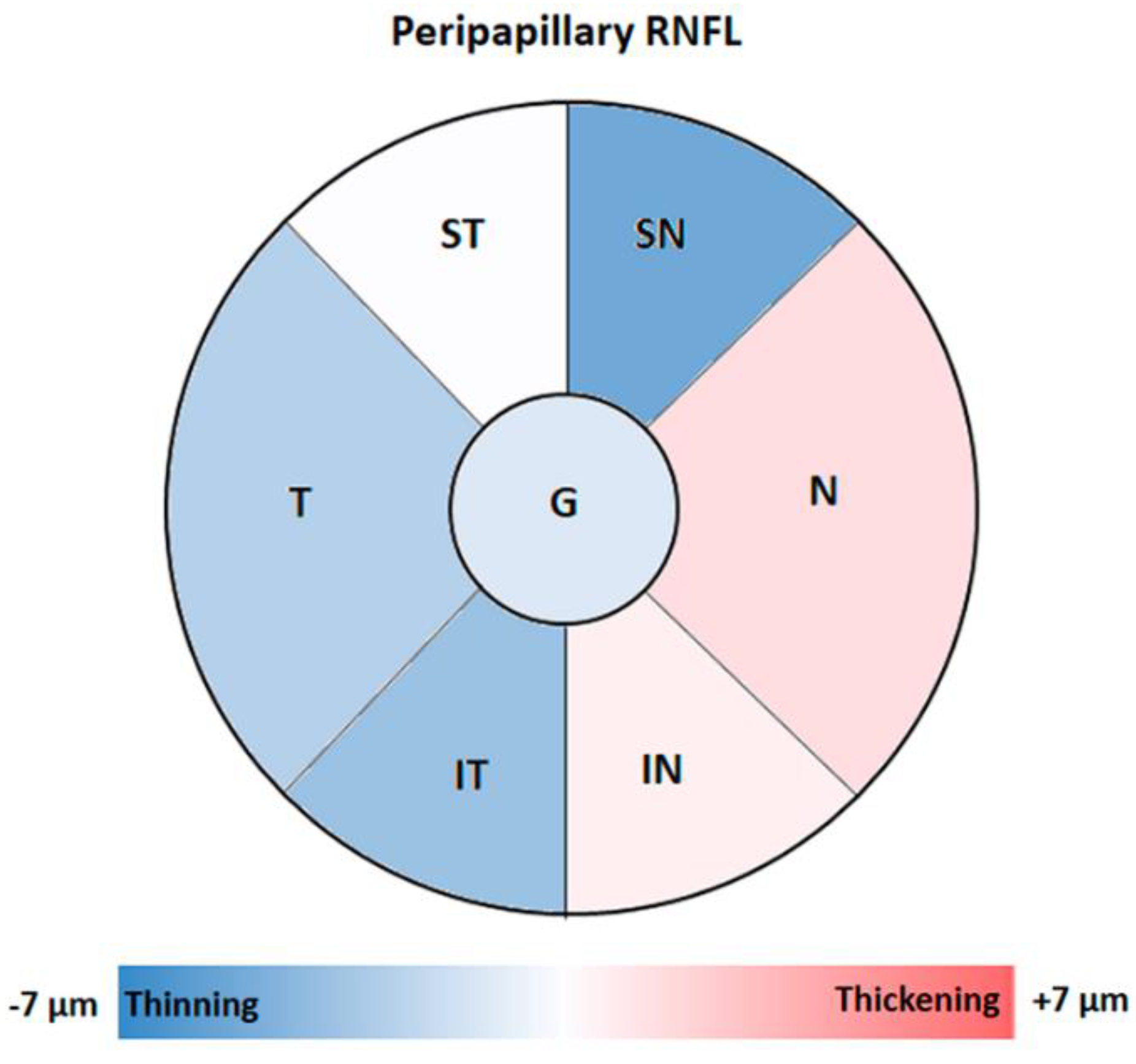 Table 3. Demographic data of the study population.
Table 3. Demographic data of the study population.
Median (interquartile range); * p < 0.05. Mann–Whitney U and chi-square tests; 1 p-value of different sex in the same group; SD: s0tandard deviation; FH+: subjects with a family history of AD; FH−: subjects without a family history of AD. MMSE: Mini Mental State Examination.
© 2020 by the authors. Licensee MDPI, Basel, Switzerland. This article is an open access article distributed under the terms and conditions of the Creative Commons Attribution (CC BY) license (http://creativecommons.org/licenses/by/4.0/).
We use cookies on our website to ensure you get the best experience. Read more about our cookies here.
Accept
We have just recently launched a new version of our website. Help us to further improve by taking part in this short 5 minute survey here. here.
Never show this again