An Efficient COVID-19 Prediction Model Validated with the Cases of China, Italy and Spain: Total or Partial Lockdowns?
Previous Article in Journal

Agreement between Type 2 Diabetes Risk Scales in a Caucasian Population: A Systematic Review and Report

Early detection of people with undiagnosed type 2 diabetes (T2D) is an important public health concern. Several predictive equations for T2D have been proposed but most of them have not been externally validated and their performance could be compromised when clinical data is used. Clinical practice guidelines increasingly incorporate T2D risk prediction models as they support clinical decision making. The aims of this study were to systematically review prediction scores for T2D and to analyze the agreement between these risk scores in a large cross-sectional study of white western European workers. A systematic review of the PubMed, CINAHL, and EMBASE databases and a cross-sectional study in 59,042 Spanish workers was performed. Agreement between scores classifying participants as high risk was evaluated using the kappa statistic. The systematic review of 26 predictive models highlights a great heterogeneity in the risk predictors; there is a poor level of reporting, and most of them have not been externally validated. Regarding the agreement between risk scores, the DETECT-2 risk score scale classified 14.1% of subjects as high-risk, FINDRISC score 20.8%, Cambridge score 19.8%, the AUSDRISK score 26.4%, the EGAD study 30.3%, the Hisayama study 30.9%, the ARIC score 6.3%, and the ITD score 3.1%. The lowest agreement was observed between the ITD and the NUDS study derived score (κ = 0.067). Differences in diabetes incidence, prevalence, and weight of risk factors seem to account for the agreement differences between scores. A better agreement between the multi-ethnic derivate score (DETECT-2) and European derivate scores was observed. Risk models should be designed using more easily identifiable and reproducible health data in clinical practice. View Full-Text
Keywords: diabetes mellitus; type 2 diabetes; risk scales; risk scores; prediction model; systematic review diabetes mellitus; type 2 diabetes; risk scales; risk scores; prediction model; systematic review
►▼ Show Figures 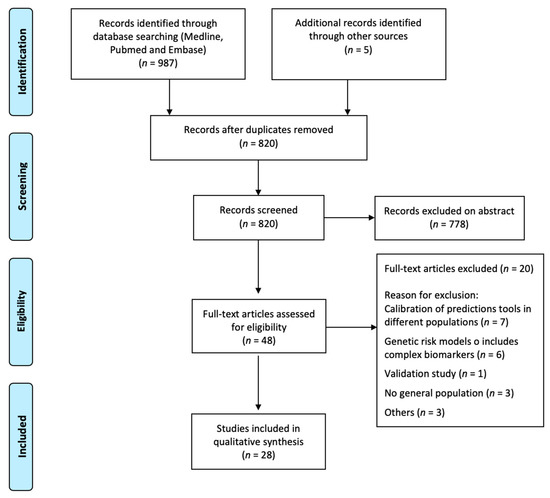