Use of Saliva for Diagnosis and Monitoring the SARS-CoV-2: A General Perspective
Previous Article in Special Issue

Interactions between Amyloid-Β Proteins and Human Brain Pericytes: Implications for the Pathobiology of Alzheimer’s Disease

Alzheimer’s disease (AD) is a progressive neurodegenerative disease that is the most common cause of dementia, especially among aging populations. Despite advances in AD research, the underlying cause and the discovery of disease-modifying treatments have remained elusive. Two key features of AD pathology are the aberrant deposition of amyloid beta (amyloid-β or Aβ) proteins in the brain parenchyma and Aβ toxicity in brain pericytes of the neurovascular unit/blood–brain barrier (NVU/BBB). This toxicity induces oxidative stress in pericytes and leads to capillary constriction. The interaction between pericytes and Aβ proteins results in the release of endothelin-1 in the pericytes. Endothelin-1 interacts with ETA receptors to cause pericyte contraction. This pericyte-mediated constriction of brain capillaries can cause chronic hypoperfusion of the brain microvasculature, subsequently leading to the neurodegeneration and cognitive decline observed in AD patients. The interaction between Aβ proteins and brain pericytes is largely unknown and requires further investigation. This review provides an updated overview of the interaction between Aβ proteins with pericytes, one the most significant and often forgotten cellular components of the BBB and the inner blood–retinal barrier (IBRB). The IBRB has been shown to be a window into the central nervous system (CNS) that could allow the early diagnosis of AD pathology in the brain and the BBB using modern photonic imaging systems such as optical coherence tomography (OCT) and two-photon microscopy. In this review, I explore the regulation of Aβ proteins in the brain parenchyma, their role in AD pathobiology, and their association with pericyte function. This review discusses Aβ proteins and pericytes in the ocular compartment of AD patients as well as strategies to rescue or protect pericytes from the effects of Aβ proteins, or to replace them with healthy cells. View Full-Text
Keywords: Alzheimer’s disease; pericytes; β-amyloid; blood–brain barrier; neurovascular unit; neurodegeneration; neuroinflammation; retinopathy Alzheimer’s disease; pericytes; β-amyloid; blood–brain barrier; neurovascular unit; neurodegeneration; neuroinflammation; retinopathy
►▼ Show Figures 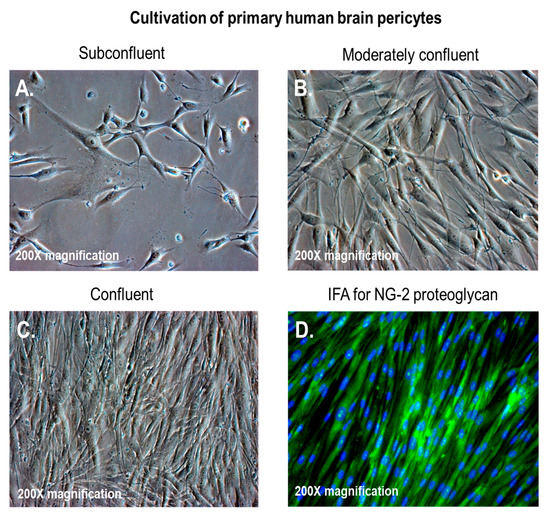