The Use of a Virtual Reality Platform for the Assessment of the Memory Decline and the Hippocampal Neural Injury in Subjects with Mild Cognitive Impairment: The Validity of Smart Aging Serious Game (SASG)
Previous Article in Journal

The Effect of a Virtual Reality-Based Intervention Program on Cognition in Older Adults with Mild Cognitive Impairment: A Randomized Control Trial

This study aimed to investigate the association between a virtual reality (VR) intervention program and cognitive, brain and physical functions in high-risk older adults. In a randomized controlled trial, we enrolled 68 individuals with mild cognitive impairment (MCI). The MCI diagnosis was based on medical evaluations through a clinical interview conducted by a dementia specialist. Cognitive assessments were performed by neuropsychologists according to standardized methods, including the Mini-Mental State Examination (MMSE) and frontal cognitive function: trail making test (TMT) A & B, and symbol digit substitute test (SDST). Resting state electroencephalogram (EEG) was measured in eyes open and eyes closed conditions for 5 minutes each, with a 19-channel wireless EEG device. The VR intervention program (3 times/week, 100 min each session) comprised four types of VR game-based content to improve the attention, memory and processing speed. Analysis of the subjects for group–time interactions revealed that the intervention group exhibited a significantly improved executive function and brain function at the resting state. Additionally, gait speed and mobility were also significantly improved between and after the follow-up. The VR-based training program improved cognitive and physical function in patients with MCI relative to controls. Encouraging patients to perform VR and game-based training may be beneficial to prevent cognitive decline. View Full-Text
Keywords: virtual reality; dementia; mild cognitive impairment; electroencephalogram virtual reality; dementia; mild cognitive impairment; electroencephalogram
►▼ Show Figures 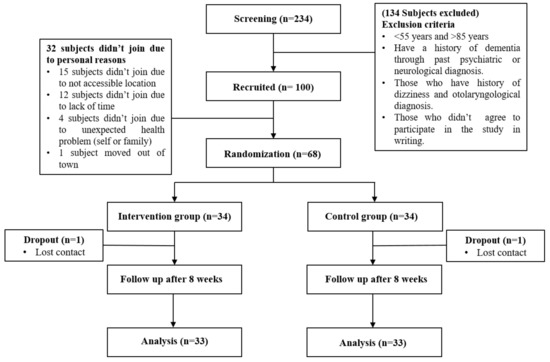