New Insights into the Implication of Mitochondrial Dysfunction in Tissue, Peripheral Blood Mononuclear Cells, and Platelets during Lung Diseases

Bibliometric Analysis of Moxibustion Research Trends Over the Past 20 Years

Moxibustion, a typical therapeutic tool of traditional East Asian medicine, is one of the most widely used treatment methodologies in the current healthcare system of East Asia. Moxibustion has been used to prevent and treat diseases for more than 2500 years in traditional Chinese medicine [1], and 67% of Korean medical doctors were reported to use moxibustion alone or in combination with their standard clinical practices [2]. Moxibustion uses thermal and chemical stimulants by burning herbal materials [3], and the combination of heat (burning pain and heat stress), tar (extracts), aroma (fumes), and psychological stress are presumed to act as therapeutic agents in moxibustion [4]. Its efficacy is mainly focused on warming and nourishing, indicating that heat stimulation and the chemical action of the ignited moxa are the most crucial variables in moxibustion [1].
Previous research has investigated the effectiveness and mechanisms of moxibustion for specific medical conditions [5]. Clinical trials have demonstrated the efficacy of moxibustion for treating suboptimal health status in pre-menopausal and post-menopausal women [6] and the possibility of using moxibustion to promote cephalic version in breech presentations [7]. Several systemic reviews showed that clinical applications of moxibustion were useful as an adjunct to standard care during stroke rehabilitation [8], and demonstrated that moxibustion might be beneficial in the management of irritable bowel syndrome [9]. Furthermore, basic research studies have investigated the underlying mechanisms of moxibustion on specific diseases such as primary dysmenorrhea [10] and post-inflammatory irritable bowel syndrome [11]. Considering the increasing number of published studies and the diversity of topics, a quantitative analysis of studies on moxibustion is needed to understand the current status of moxibustion research.
Bibliometrics is a qualitative and quantitative analysis method used to assess the relationships and impacts of publications, journals, countries, and researchers within a certain research field using mathematical and statistical tools [12]. Bibliometrics can be utilized to provide overviews of large volumes of academic articles and systematically estimate the patterns of research trends. Moreover, it enables identification of the influential publications, authors, journals, organizations, and countries in a specific research area [13], and these analyses can provide data to inform policy making and clinical guidelines in the future [14]. Bibliometric analyses have been employed to assess research trends in a variety of fields, including complementary and alternative medicines. For example, bibliometric studies have been used to evaluate acupuncture research over the past 20 years [15,16] and to investigate the overall trends in acupuncture clinical trials [17]. However, no studies have applied bibliometric analyses to moxibustion research.
The present study used bibliometrics to explore the current status of research on moxibustion over the past 20 years based on a network analysis examining the patterns of moxibustion research.

All data were retrieved from the Web of Science via the Kyung Hee University Library website on 5 February 2020, using the following search terms: (moxibustion OR moxa). The Web of Science provides comprehensive publication data and is widely accepted and frequently used for the analysis of scientific publications. The publication period considered in this study was from 1 January 2000 to 31 December 2019, and a total of 1270 articles were identified. Articles that were not original articles or reviews (n = 95) and those that were not written in English were excluded (n = 29); thus, 1146 articles written in English were ultimately included in the final analyses.

All data from the Web of Science were imported into VOSviewer v.1.6.11 (Centre for Science and Technology Studies, Leiden University, Leiden, The Netherlands), which is commonly used to analyze and visualize relationships among authors, countries, co-citations, and the terms used in the articles. Publications were sorted and systematically assessed according to publication year, research area, journal title, countries, organizational affiliations, and authors. Additionally, the frequencies of keywords extracted from the articles were included in the network analysis.
Before the data were analyzed by VOSviewer, duplicated terms were removed. Some keywords with synonyms, such as (“rats” and “rat”) and (“moxibustion” and “moxa”), were merged into one word. The same process was performed for author names. Cleaned and organized data were then imported into VOSviewer.

The visualization of similarities (VOS) mapping method was used to estimate similarity (affinity) according to association strength, where higher association strength refers to a greater similarity between terms, and a larger number of publications in which two items co-occur indicates that the terms are more closely similar to each other. The link strength between two nodes denotes the frequency of co-occurrence. It can be used as a quantitative index to describe the relationship between two nodes [18]. In the case of co-occurrence analysis, the link strength between keywords displays the number of publications in which keywords occur together. Keywords represent the article research themes, so co-occurring keywords reveal associations in the underlying themes among publications. Keywords were defined as words used more than 20 times in titles and abstracts across all publications, and co-words were defined as words that co-occurred in the article titles and abstracts. By logging the keywords based on the average publication year, it was possible to identify both popular topics and research trends in moxibustion research.
The total link strength of a node is the sum of the link strengths of this node over all the other nodes [19]. In the case of co-authorship analysis, the link strength between organizations demonstrates the number of publications co-authored by two affiliated organizations. In contrast, the total link strength indicates the total strength of the co-authorship links of a given organization with other organizations [20].
In VOSviewer, each node, keyword, or organization is represented by a circle, and the diameter and label size of the circle indicate the number of occurrences. The label size of a term denotes the number of publications, and the distance between two terms denotes the degree of association. Linked terms are automatically grouped and clustered using different colors. The number of clusters can vary depending on the threshold of similarity between the nodes. The resolution for clustering was adjusted to the proper level as required.

3.1. Global Trends in Studies Investigating Moxibustion Over the Past 20 Years

The number of articles related to moxibustion research has consistently increased over the past 20 years, but with some variations among years (Figure 1). Among the 21 countries/regions identified in the current study, China published the most articles (62.7%), followed by South Korea (12.8%) and the United States (10.7%; Table 1).

3.2. Analysis of Research Areas and Journals

Of the 61 research areas that were verified in the present study, the most highly represented research area as judged by the number of articles was integrative complementary medicine (58.6% of all articles), followed by general internal medicine (7.5%), neuroscience and neurology (6.2%), research experimental medicine (5.1%), and cell biology (3.8%; Table 2).
Of the 253 journals identified in this study, the World Journal of Acupuncture–Moxibustion issued the most articles (14.9%), followed by Evidence-Based Complementary and Alternative Medicine (10.7%), and Journal of Acupuncture and Tuina Science (5.8%; Table 2).

Keywords from the 1146 publications assessed in the present study were analyzed using VOSviewer (Figure 2A). Forty keywords occurred more than 20 times in the title and abstract fields across all the articles. Table 3 shows the occurrences, average publication year, and average citation numbers of the 40 keywords. The top three keywords according to the weight of occurrences were moxibustion (346 occurrences), acupuncture (343), and electro-acupuncture (110), suggesting that moxibustion has been studied along with different treatment modalities, such as acupuncture or electro-acupuncture.
The characteristics of moxibustion research were examined by analyzing these 40 keywords, with moxibustion studies divided into two categories: basic studies, with topics such as rat (82 occurrences), stimulation (47), expression (44); and clinical studies, with keywords including randomized controlled trial (80 occurrences), meta-analysis (65), and systematic review (52). Independent of the type, research on the application of moxibustion was conducted for particular medical conditions such as inflammatory bowel disease (29 occurrences), breech presentation (25), inflammation (25), irritable bowel syndrome (24), osteoarthritis (20), and stroke (20).
The keywords were color-coded by VOSviewer based on the average publication year as shown in Figure 2B, where blue represents relatively early and red represents later average publication years. The most recent keywords were “acupuncture–moxibustion therapy” (average publication year: 2018.0), “moxibustion therapy” (2017.7), “protocol” (2017.3), “acupuncture therapy” (2017.2), and “women” (2016.4). In contrast, the most common keywords in earlier moxibustion studies were “analgesia” (average publication year: 2011.6), “breech presentation” (2011.8), “stimulation” (2012.5), “alternative medicine” (2013.1), and “apoptosis” (2013.2).

The seven main diseases using moxibustions were found among 40 keywords through keywords analysis: pain (33.2%), inflammatory bowel disease (13.6%), breech presentation (11.7%), inflammation (11.7%), irritable bowel syndrome (11.2%), osteoarthritis (9.3%), and stroke (9.3%; Figure 3A). When we considered the research trends by average publication year, breech presentation was the oldest (average publication year: 2011.8) and inflammation was the most recent (2015.7). When we extracted the impact of research by average citation number, osteoarthritis had the highest citation number (average citation number: 23.9) and inflammation had the lowest citation number (5.6; Figure 3B).

3.5. Analysis of Organizations and Authors

3.6. Analysis of Total Link Strength of Organizations and Authors

This research was supported by the Basic Science Research Program through the National Research Foundation of Korea (NRF) funded by the Ministry of Science, ICT and Future Planning (No. 2018R1D1A1B07042313 and No. 2018R1A6A6031080).

The authors declare that there are no conflicts of interest regarding the publication of this paper. 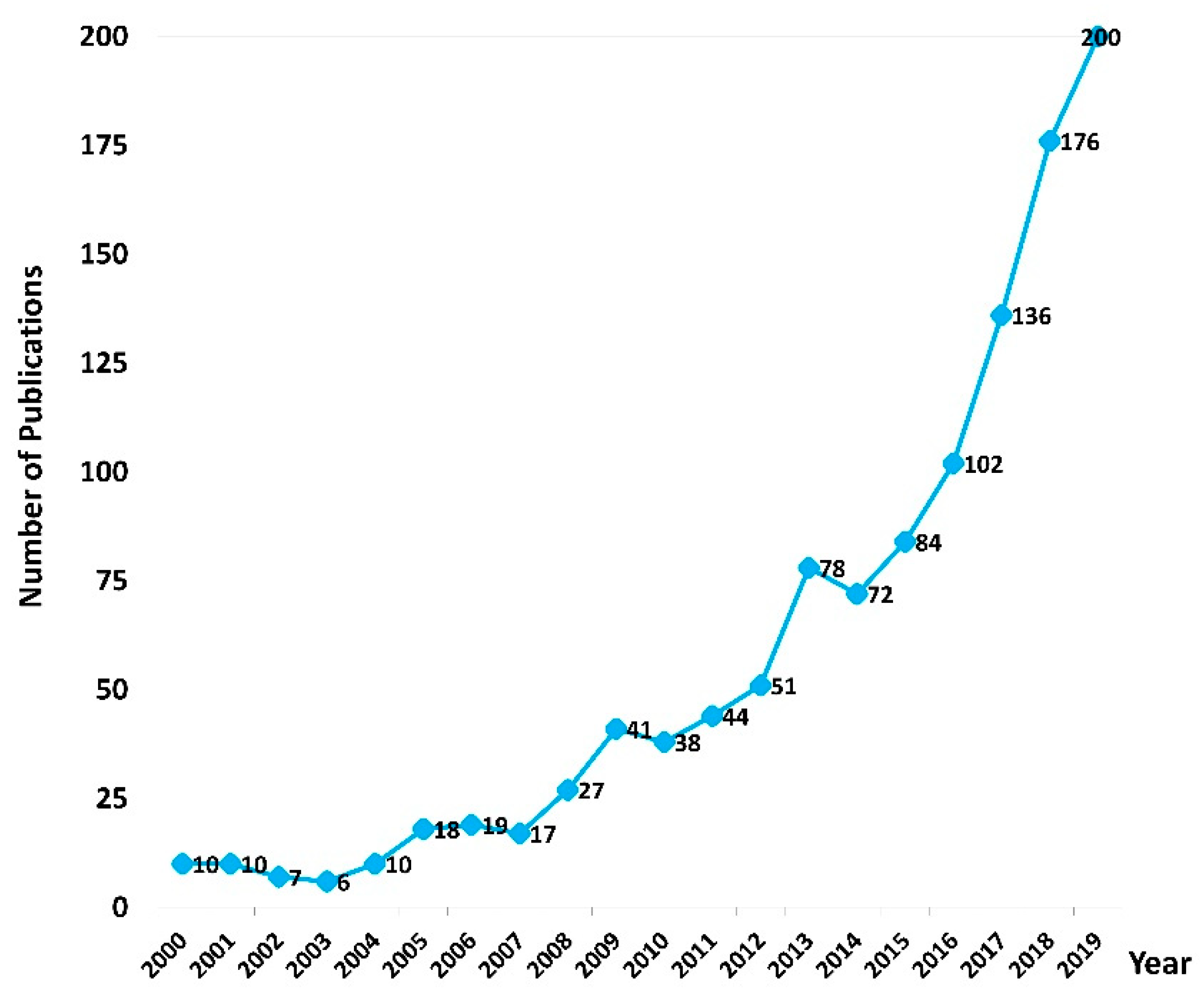 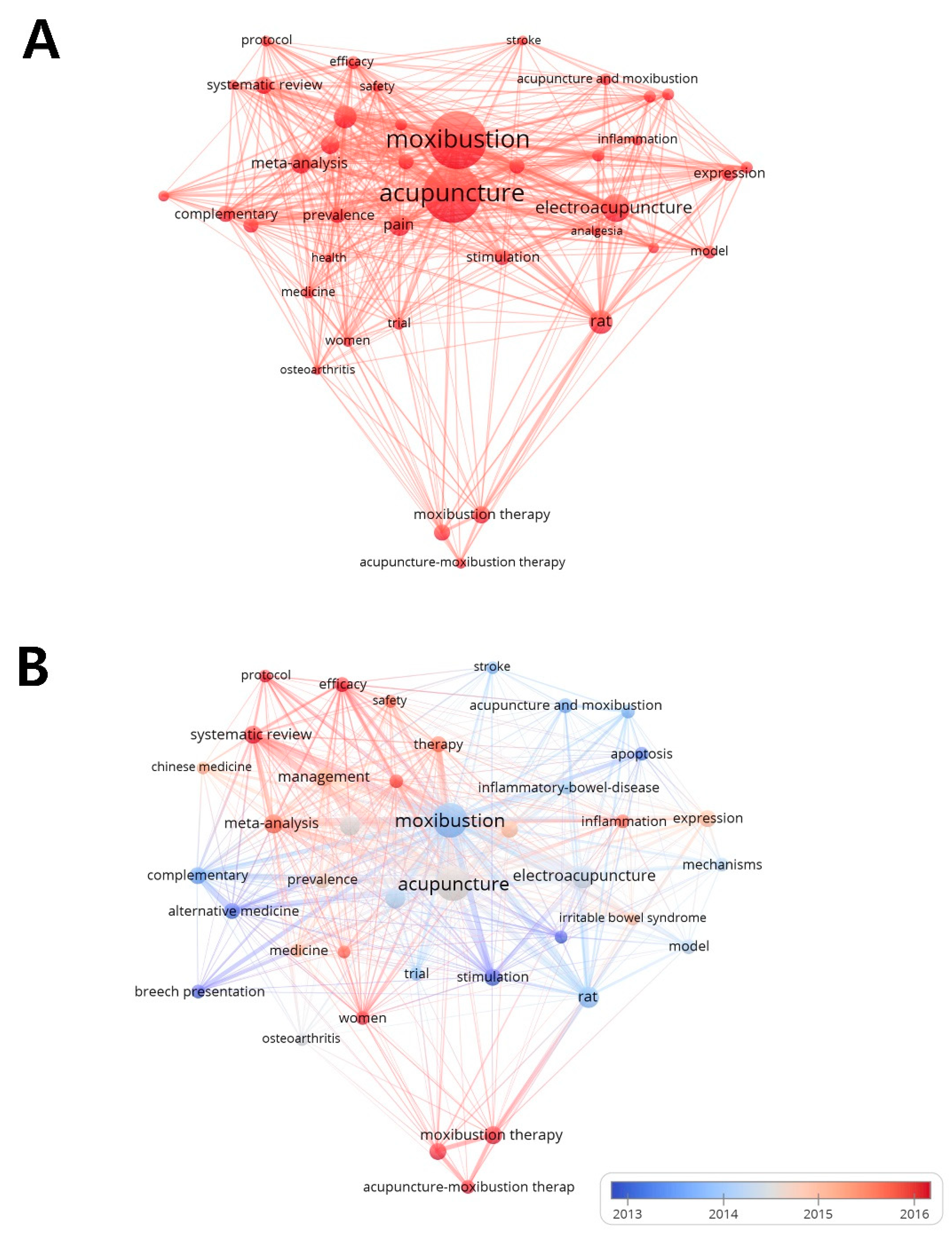 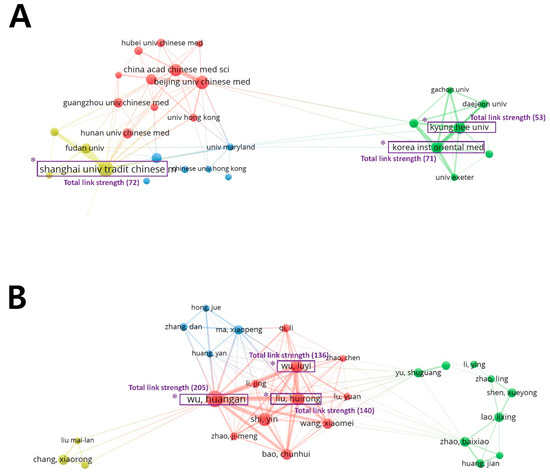