:
Sacubitril/valsartan reduces mortality in heart failure with reduced ejection fraction (HFrEF) patients, partially due to cardiac reverse remodeling (RR). Little is known about the RR rate in long-lasting HFrEF and the evolution of advanced echocardiographic parameters, despite their known prognostic impact in this setting. We sought to evaluate the rates of left ventricle (LV) and left atrial (LA) RR through standard and advanced echocardiographic imaging in a cohort of HFrEF patients, after the introduction of sacubitril/valsartan. A multi-parametric standard and advanced echocardiographic evaluation was performed at the moment of introduction of sacubitril/valsartan and at 3 to 18 months subsequent follow-up. LVRR was defined as an increase in the LV ejection fraction ≥10 points associated with a decrease ≥10% in indexed LV end-diastolic diameter; LARR was defined as a decrease >15% in the left atrium end-systolic volume. We analyzed 77 patients (65 ± 11 years old, 78% males, 40% ischemic etiology) with 76 (28–165) months since HFrEF diagnosis. After a median follow-up of 9 (interquartile range 6–14) months from the beginning of sacubitril/valsartan, LVRR occurred in 20 patients (26%) and LARR in 33 patients (43%). Moreover, left ventricular global longitudinal strain (LVGLS) improved from −8.3 ± 4% to −12 ± 4.7% (p < 0.001), total left atrial emptying fraction (TLAEF) from 28.2 ± 14.4% to 32.6 ± 13.7% (p = 0.01) and peak atrial longitudinal strain (PALS) from 10.3 ± 6.9% to 13.7 ± 7.6% (p < 0.001). In HFrEF patients, despite a long history of the disease, the introduction of sacubitril/valsartan provides a rapid global (i.e., LV and LA) RR in >25% of cases, both at standard and advanced echocardiographic evaluations.
Keywords:
sacubitril/valsartan; cardiac reverse remodeling; heart failure with reduced ejection fraction; strain

Cardiac adverse remodeling is associated with poor outcome in patients affected by heart failure with reduced ejection fraction (HFrEF) [1,2]. It is well known that the inhibition of neurohormonal system, through ACE inhibitors (ACE-i), beta-blockers and mineral-corticoid receptor blockers (MRA), improves left ventricular ejection fraction (LVEF) inducing a left ventricular reverse remodeling (LVRR) [3,4,5,6].
Recently, sacubitril/valsartan has been shown to reduce cardiovascular mortality and hospitalizations in HFrEF patients compared to enalapril and also to decrease ventricular arrhythmias and appropriate implantable cardioverter defibrillator (ICD) shocks [7,8]. However, even though one prospective study reported a significant cardiac RR during therapy with sacubitril/valsartan along with a reduction in N-terminal pro B-type natriuretic peptide (NT-proBNP) blood levels [9], data on the precise rates of LVRR and LARR, as defined in literature [2,10], are scarce, mostly in long-lasting diseases. Furthermore, so far, there are few evidences about the evolution of LV and LA advanced echocardiographic parameters under sacubitril/valsartan, despite their prognostic role has recently emerged in the setting of HFrEF patients [11]. Therefore, our study sought to evaluate the rates of global cardiac reverse remodeling, through a multi-parametric standard and advanced echocardiographic evaluation, in a long-lasting HFrEF population.

From January 2016 to January 2018 we prospectively enrolled HFrEF patients under optimal medical therapy (OMT) who started sacubitril/valsartan at Heart Failure Clinic of the University Hospital of Trieste. Inclusion criteria were:

1)
Diagnosis of symptomatic HFrEF (<40%) despite OMT according to ESC guidelines [12].
2)
Availability of a follow-up evaluation at 3 to 18 months including a multi-parametric echocardiographic evaluation. Considering the observational character of our study, the timing of the follow-up evaluation was established by the physician who followed the patient. In case of two echocardiographic evaluations during the follow-up period the last one was considered.
3)
Absence of cardiac resynchronization therapy during the study observation and within 12 months before the enrolment (i.e., introduction of sacubitril/valsartan)

Categorical data are presented as percentages and numbers, normally distributed continuous data as mean ± standard deviation, and non-normally distributed variables as median and interquartile range (IQR). Unpaired and paired Student’s t-test was used, when appropriate, for comparison of normally distributed data, while Mann-Whitney test was used for abnormally distributed data. The χ2 test or the Fisher test were used, when appropriate, to compare non-continuous variables expressed as proportion.
Univariable and subsequent possible multivariable logistic regression modelling was performed to assess the effect of the clinical variables LVRR. p values are two sided and were considered significant when <0.05.
Intra and Inter observer variability was determined by the ICC (Intraclass Correlation Coefficient) computed respectively on the repeated measurements at 2 different times by 1 experienced reader (M.C.) in 23 randomly selected patients. Then, a second experienced reader (V.N.) performed the analysis in the same 23 patients, providing the interobserver measurements data. This allowed us to achieve 80% power to detect an ICC of 0.80 under the null hypothesis of ICC = 0.50, by using an F-test at a significance level of 0.05 [15].
The agreement between measures for the assessment of LV and LA strain were further explored using Bland-Altman analysis. (Table S1).
All the analyses were performed using IBM Corp. Released 2016. IBM SPSS Statistics for Windows, Version 24.0. Armonk, NY, USA: IBM Corp.

We would like to thank Fondazione CRTrieste, Fondazione CariGO and Fincantieri for the continuous support to the clinical management of patients affected by cardiomyopathies, followed in Heart Failure Outpatient Clinic of Trieste, and their families. 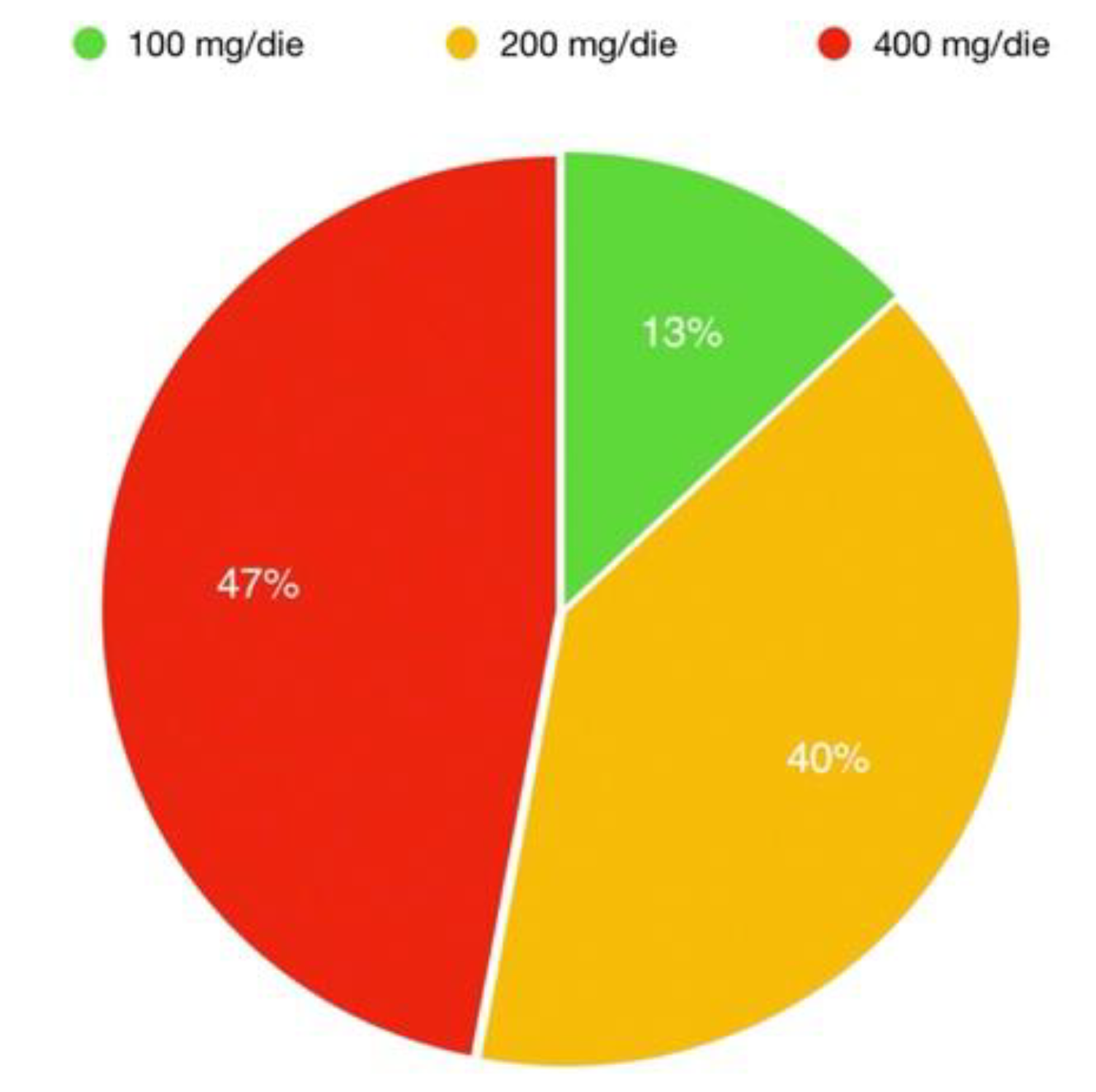 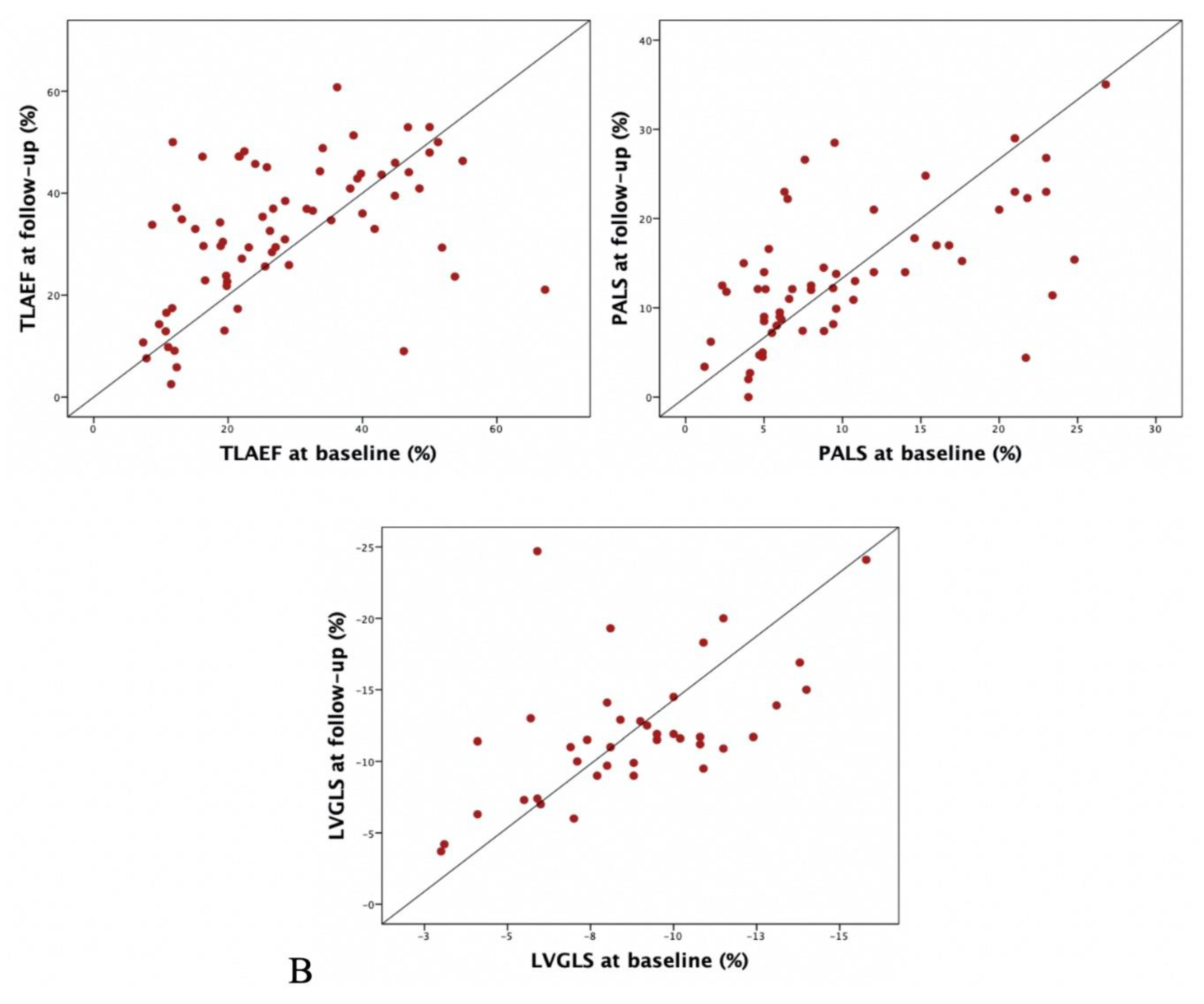