:
Intramedullary lengthening, in cases of extensive humeral shortening, offers the advantages of preventing external-fixator-associated problems. The humeral cavity, as the main parameter in nailing, however, has been neglected in recent literature. It was hypothesized that available implants might be too large and therefore increase the risk of intraoperative fractures. The aim of this cross-sectional study was to describe the humeral canal and how it might affect the choice of implant and the surgical approach. Thirty humeri (15 female, 15 male) from clinical patients and anatomical specimens were studied. Specifically, the medullary cavity width (MCW), cortical thickness (CoT), and the course of the medullary canal were examined. The smallest MCW diameters were found at the distal third of the humeral shaft with mean diameters of 10.15 ± 1.96 mm. CoTs of female humeri were significantly smaller than those of male humeri (p < 0.001). The mean angles of the pro- and recurvatum were 4.01 ± 1.68° and 10.03 ± 2.25°, and the mean valgus bending was 3.37 ± 1.58°. Before implanting a straight lengthening nail into a doubly curved humerus, X-rays and, in selected cases, CT-scans should be performed. The unique size and course of the humeral canal favors an antegrade approach in cases of intramedullary lengthening.
Keywords:
humerus; intramedullary lengthening; medullary cavity; cortical thickness

Limb lengthening goes back to the work of Ilizarov, who initially introduced an external apparatus for bone fragment fixation and lengthening in the early 1950s [1]. External fixation of bones, however, carries the risk of pin infection, perioperative nerve and soft tissue irritation, and discomfort during treatment [2]. Therefore, intramedullary nailing and distraction was introduced.
In 2015, an expert review depicted intramedullary nailing and lengthening for the humerus [3]. Patient satisfaction, disability, and functionality scores showed improvements with these interventions [4,5,6,7]. A similar consolidation index to external lengthening was also seen [8]. The main advantage of intramedullary implants is that they ensure Range-of-Motion (ROM) during the lengthening phase at pre-surgery levels [6].
There is scarce literature regarding complications in lengthening with straight intramedullary implants [6]. In fracture treatment, the most feared complications are iatrogenic supracondylar fractures during retrograde nail insertion [9]. Detailed knowledge of the humeral anatomy and exact fitting implants are essential to avoid this complication [4]. In 1944, Böhler et al. showed the unique S-shaped curvature of the humeral canal, and recent studies have reinforced these observations [10,11]. Significant differences regarding the minimal cavity diameters and cortical bone thickness (CoT) among ethnicities have been demonstrated. CoT in patients of South Asian descent, for example, is larger than that observed in patients of Arab descent, and as a result, the medullary cavity is narrower [12]. Consequently, not all humeri can be treated with the same nail size, and different implants should be used according to the given anatomical conditions. This applies even more to patients with post-traumatic or congenital humeral shortening [5].
It was hypothesized that available implants might be too large and therefore increase the risk of intraoperative fractures during retrograde nail insertions. The purpose of this study was to describe the anatomy of the humeral canal and its clinical relevance in fitting a straight nail down the doubly curved humeral bone.

Thirty humeri (15 female, 15 male) from clinical patients and anatomical specimens were evaluated in this cross-sectional study. The study was approved by the Human Ethics Committee and the institutional review board of the Medical University of Vienna (Nr. 2241/2018). This manuscript is structured according to the STROBE checklist [13]. All specimens were of Caucasian origin. Although samples were randomly selected, special focus was placed on choosing the same numbers of female and male humeri. Different examination modalities were applied to investigate the special 3-dimensional shape of the humeral cavity, including its S-shaped pro- and recurvatum as well as valgus bending. Including patients with preexisting CT imaging allowed for the examination of humeri in a younger population, addressing a potential selection bias. All CT and radiographic measurements were performed using IMPAX EE (2018 Agfa-Gevaert Group, Mortsel, Belgium) and ImageJ software 1.50e [14]. Specimens were subdivided into two groups depending on the different origins of the humeri:

CT images from 7 male and 3 female humeri were retrospectively retrieved from polybody scans performed at our clinical department for trauma surgery from September to November 2018. The CT device used was the SOMATOM Edge plus (SIEMENS Healthineers, Erlangen, Germany). Each humerus was reconstructed in the coronal, sagittal, and axial planes, and measurements were taken from the surgical neck of the humerus to the supracondylar fossa. The humeral cavity was divided into 7 segments, and axial images were used for sagittal and coronal measurements. For each level, detailed anterior, posterior, medial, and lateral CoT measurements were made.

All specimens of the anatomical evaluation originated from voluntary body donations to the Division of Anatomy and Cell Biology. Twenty formaldehyde–phenol embalmed specimens (8 male, 12 female) without any evidence of humeral fractures, prostheses, osteomyelitis, or nailing were included in this evaluation. Samples were randomly selected based on the availability at the division for Anatomy and Cell Biology. Bare bones were packed in sterile vacuum bags and prepared for radiological evaluation. Anteroposterior (AP) as well as lateral radiographs were carried out and millimeter scales were added to each radiograph for exact measurements. For further dissection, each humerus was oriented with the epicondyles lying flat on the table surface and the anterior margin facing up on the preparation table. All sections were performed using the EXAKT 312 Diamant Band Pathology Saw (2019 EXAKT Technologies, Inc., Oklahoma City, OK, USA). The forefront along the intertubercular groove and the anterior margin were marked. The length of the medullary cavity was measured in the radiographs from the surgical neck to the supracondylar fossa, and this was divided into 7 parts (Figure 1a). A similar method has already been published in the literature [12]. For this study, the procedure was adapted and improved by taking regular measurements at constant instead of random distances. At the defined and marked levels, horizontal sections of the bones were taken with the pathology saw. A sliding caliper with an accuracy of 0.03 mm was used to measure the sagittal and coronal diameters of the sections as well as anterior, posterior, medial, and lateral CoTs. This paralleled the approach taken for our radiological measurements; at the previously marked levels, the coronal and sagittal diameters of the humeral cavity and CoT were measured using ImageJ software [14]. These anatomical and radiological results were then compared and analyzed.

Statistical analysis was performed with IBM SPSS Statistics software (BM Corp. Released 2018. IBM SPSS Statistics for Windows, Version 25.0. Armonk, NY, USA: IBM Corp.). Descriptive statistics (mean, SD, minimum and maximum) were computed for all metric variables. The course of the medullary canal and the alteration of the medullary cavity width (MCW) and CoT from proximal to distal points were measured. The maximum and minimum medullary MCW and CoT were determined. Furthermore, differences in sex, arm dominance, and age were identified. The intraclass correlation κ was used for the comparison of radiographic and anatomical measurements in group 2 (≥0.9 strong; 0.75–0.9 good, 0.75–0.5 weak, <0.5 weak) [15]. The Pearson coefficient r was used for the correlation of sex and age (>0.8 < r ≤ 1.0 strong; 0.5 < r ≤ 0.8 moderate; 0.2 < r ≤ 0.5 weak; 0.0 < r ≤ 0.2 no correlation). For normally distributed metric data, a Student’s r-test was used, while non-normally distributed variables were analyzed using a Mann–Whitney U test. For categoric variables, the chi-square test was performed. A p-value < 0.05 was considered significant. The Bonferroni correction was applied for multiple testing.

Detailed results of the smallest CoTs for each level are given in Table 1. From proximal to distal, CoTs showed increasing thickness, with the smallest mean values observed at level 1 and the largest at level 7.
Differences could be observed between female and male CoTs with the mean values for male CoTs being statistically larger on all measured levels (p < 0.001). There were statistically significant positive correlations between the anterior CoT and humerus length at level 6 (p = 0.002, r = 0.530) and level 7 (p = 0.005, r = 0.523), but no correlation was apparent between CoT and age. Apart from level 1, intraclass correlation for CoT revealed good to moderate results for the entire humerus (Table 3). No correlation was shown for level 1. The intraclass correlation for anterior CoT showed good results for level 6 (κ = 0.867) and moderate results (κ = 0.675) for level 7.

3.3. Course of the Humeral Cavity

AP and lateral radiographs illustrated the alteration of the humeral cavity over the course of the humerus. (Figure 1b). In the AP view, minimal valgus bending was noted, and the lateral view demonstrated an S-shaped course. The mean angles of the pro- and recurvatum of the investigated specimens were 4.01 ± 1.68° and 10.03 ± 2.25°, and the mean valgus bending was 3.37 ± 1.58°. There were no differences between male and female specimens and no age correlation.

The unique course of the humeral cavity in combination with currently available implants makes exact preoperative planning of intramedullary humeral lengthening mandatory. We believe that, from an anatomical standpoint, antegrade nailing shows less fracture potential and is a safer approach for the S-shaped humeral canal.

We would like to express our gratitude to our radiology team at the department for trauma surgery, who reconstructed our CT images. We give special thanks to our colleagues at the division for anatomy, who helped to collect and prepare the anatomical specimens used in our study. None of these individuals received any financial support for this study. 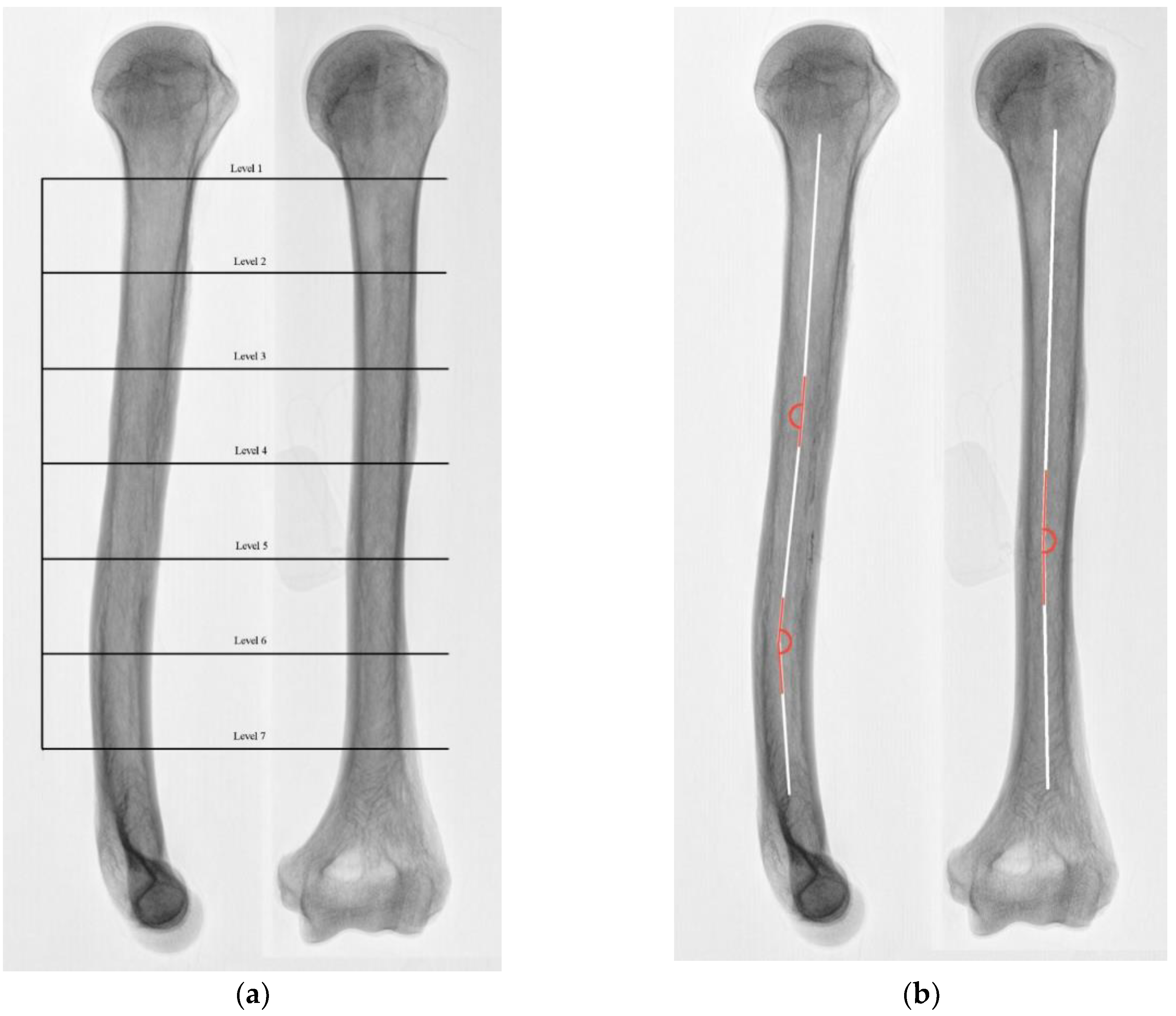