Adalimumab is used at 40-mg dose to treat systemic inflammatory diseases. Given the impact of adverse drug reactions (ADRs), which particularly result in the discontinuation of adalimumab therapy in female patients, this study examined whether sex affects the frequency and type of ADRs induced by adalimumab. In this study, the prescription records and laboratory data of patients aged ≥19 years who had been admitted to the Seoul National University Hospital (SNUH) and prescribed adalimumab were analyzed using an electronic medical record database. The analysis revealed that female patients more frequently experienced adalimumab-induced ADRs compared with male patients (63.2% vs. 52.2%). The incidence of ADRs was significantly higher in female patients with ankylosing spondylitis or rheumatoid arthritis than in male patients with similar conditions (81.5% vs. 60.7% or 64.4% vs. 50.0%, respectively). The median body weight (BW) was lower in female patients than in male patients (54.0 vs. 66.0 kg). Moreover, the incidence of ADRs in patients with a BW of <54.0 kg (i.e., the median female BW) was higher than for those with a BW of ≥54.0 kg, in both males and females. Our results suggested that the predominance of ADRs induced by adalimumab in females was because of their relatively lower BW. This suggests the importance of BW as a determining factor in sex disparity of ADR occurrences.
Keywords: adalimumab; adverse drug reaction; gender; body weight; skin; infection; test abnormality adalimumab; adverse drug reaction; gender; body weight; skin; infection; test abnormality

Adalimumab binds to tumor necrosis factor (TNF)-alpha and blocks interactions with the p55 and p75 cell surface TNF receptors, inhibiting inflammatory responses. The drug is widely prescribed for both male and female patients with rheumatoid arthritis, ankylosing spondylitis, Crohn’s disease, ulcerative colitis, and psoriasis [1,2], and also for patients with hidradenitis suppurativa, non-radiographic axial spondyloarthritis, peripheral spondyloarthritis, and non-infectious uveitis [3]. Adalimumab is currently marketed in injection vials and pens containing a fixed dose of 40 mg for adults, regardless of differences in sex or body weight (BW) [4]. The common side effects of adalimumab include injection site pain, upper respiratory tract infection, increased creatine phosphokinase levels, headache, rash, sinusitis, nausea, urinary tract infection, abdominal pain, flu-like syndrome, hyperlipidemia, back pain, high cholesterol, hemuresis, and hypertension. The occurrences and severity of adverse drug reactions (ADRs) vary among patients treated with adalimumab [5,6,7]; however, the exact reasons for these variations have remained elusive.
It has been recognized that the frequent and common adalimumab-induced ADRs have resulted in a fear of such deleterious effects, leading to a decrease in drug compliance [5,6,7,8]. Indeed, there have been controversial reports of sex-dependent ADRs induced by adalimumab therapy. A small group of prospective clinical cohort studies showed that adalimumab induced more ADRs in female patients, who more often discontinued the drug owing to negative effects [8]. In another study, female sex was considered to be the strongest predictor of higher anti-TNF drug discontinuation rates [9,10]. Moreover, it has been reported that female sex is associated with lower trough levels of adalimumab and a higher incidence of adalimumab antibody production [11]. Additionally, a prospective, comparative, multicenter, and long-term drug-survival study has indicated that a higher body mass index (BMI) is a predictor of discontinuation of certain biological agents, including adalimumab, owing to their adverse effects or inefficacy [12,13]. Thus, female sex has been reported as a consistent predictor for drug discontinuation owing to side effects.
It has been claimed that differences between the two sexes regarding body composition, such as smaller organ sizes and higher proportion of body fat in females, may result in different pharmacokinetics of certain biological agents (e.g., rituximab and cetuximab) [14,15]. These differences, along with hormonal differences, suggest the requirement of sex-dependent dosage regimens. Hence, further analysis may be necessary to understand the basis of ADRs with regard to sex differences. Given the sex-skewed impact of ADRs on the discontinuation of adalimumab therapy and our preliminary analysis of spontaneous ADR incidence reports over the past decade, we aimed to examine whether there were any sex-based differences in ADRs induced in patients receiving adalimumab medications using an electronic medical record (EMR) database, in conjunction with test results and nursing records, in Seoul National University Hospital (SNUH) between 2008 and 2018. In this study, we proposed that an average BW of 54.0 kg was the threshold that determined ADR types and adalimumab frequencies and that the predominance of ADRs in female patients may result from the fixed-dose injection regimens administered to adults, regardless of an individual patient’s BW.

The study was approved by the Institutional Review Board of SNUH (IRB# H-1803-095-930), which is a 1779-bed medical center in the Republic of Korea. The records of 792 patients aged ≥19 years who were admitted to SNUH and had been prescribed adalimumab at least once between February 2008 and May 2018 were extracted from the EMR database. After the records of patients with cancelled prescriptions of adalimumab (n = 65) were removed, 727 patient records remained. The collected data contained anonymous codes representing patient files comprising age, sex, height, initial BW, medical diagnosis codes, concomitant diseases, ADRs, dates of laboratory tests conducted and medications (generic and brand name), and prescription date and duration.

2.2. Analysis of Prescription and Laboratory Data

On the basis of the laboratory data, various parameters, including diseases, prescription information for adalimumab (e.g., prescription period and co-prescribed drugs), types and frequencies of ADRs, and modification of prescriptions after ADRs, were investigated.

All values are presented as medians (ranges) or averages ± standard deviations, as appropriate. The chi-square test was performed to assess any sex-based differences in the occurrence of ADRs. Statistical analyses were computed by using the IBM SPSS statistics 23.0 software package (SPSS Inc., Chicago, IL, USA).

Recognizing ADRs has emerged as a key factor in deciding an appropriate medication therapy for a particular condition. As adverse reactions and toxicities of drugs may vary depending on sex, information on ADRs should provide incidence rates, severity, durations, and onset times of parameters of interest in both the sexes. ADRs induced by drugs may vary between the sexes owing to differences in height, weight, pharmacokinetics, and genetic characteristics [16,17]. However, many previous studies mostly have included men [18,19]. In general, the medication guidelines, systems, and policies that specify sex differences appear to be incomplete. We first examined a 10-year period of voluntary ADR reports archived in the Korean Institute of Drug Safety and Risk Management and extracted drug items that led to potential differences in the occurrence of ADRs based on sex. However, as these archives included only voluntary reports, it was not plausible to estimate the overall proportion and incidence rate. Thus, the present study utilized an EMR database to analyze the incidence, type, and severity of ADRs induced by adalimumab.
Adalimumab is administered to adults as a 40-mg solution for injection in a pre-filled syringe. In the context of patient BW, the dose is only adjusted for patients with polyarticular juvenile idiopathic arthritis or with plaque psoriasis. The recommended dosing regimen is 20 mg every other week for patients with a BW of 10.0 kg to <30.0 kg and 40 mg every other week for those with a BW of ≥30.0 kg. The available data suggest that clinical response is usually achieved within 12 weeks of treatment [20]. If patients do not exhibit a response during this period, continued therapy should be reconsidered [21]. The dose of adalimumab for pediatric patients with Crohn’s disease is also based on BW. The induction dose is 80 mg during week 0 and 40 mg during week 2 for patients with a BW of <40.0 kg, if there is a need for a more rapid response to therapy, and with the awareness that the risk of adverse events may be higher with use of a higher induction dose (a maintenance dose of 20 mg every other week is recommended). For patients with a BW of ≥40.0 kg, the doses are doubled (i.e., 160 mg during week 0 and 80 mg during week 2) [22]. Hence, the regular dose of adalimumab for adults with inflammatory diseases is usually 40 mg per patient, regardless of the sex and BW. The prescription rate of adalimumab has gradually increased since its introduction in the market [22,23], and there will be several more adalimumab biosimilars available in the future [23,24].
In the study of Lesuis et al. [25], the proportion of rheumatoid arthritis in patients was higher in women and rates of inflammatory bowel disease and psoriasis were higher in men [25]. In the present study, rheumatoid arthritis was also more common in women but rates of inflammatory bowel disease and psoriasis were similar in men and women. In other studies, female sex has been reported as a predictor for biological discontinuation of adalimumab in the treatment of psoriasis [26], rheumatoid arthritis, and axial spondyloarthritis [27]. The incidence of ADRs induced by adalimumab was greater in female patients, although the types of adverse reactions were different [28]. Therefore, among the non-responders, the discontinuation rate of adalimumab was higher in female patients [28,29].
An important finding of our study was the identification of BW as a factor that determines the predominance of ADRs in female patients. This idea was supported by the different frequencies of ADRs in the analysis of subgroups based on BW tiers in male and female patients. The frequency of ADRs in either male or female patients with a BW of <60.0 kg exhibited BW dependency likely because the median BW was significantly lower in female patients than in male patients (the proportion of female patients with a BW of <60.0 kg was 68.0%). Additionally, Hansel et al. [30] demonstrated the importance of BMI in determining a dosage regimen of adalimumab. Dose tapering with adalimumab was efficacious and safe, especially in patients with low BMI. These patients showed maintenance of efficacy and, in cases of relapse, only needed a short time to re-achieve disease clearance at a standard dose [30].
The incidence and characteristics of ADRs in the present study were similar to those in a study by Noah et al. [29]: 28.4% patients in our study experienced dermatological problems (Table 3), which was similar to the 30% of patients with skin and allergenic reactions in the study by Noah et al. [31]. In another study, the percentage of ADRs in patients with rheumatoid arthritis followed for 3 years after the start of adalimumab treatment was 34.2% [32]. In our study, the frequency of ADRs induced by adalimumab used to treat rheumatoid arthritis was 60.0% (19 male patients and 56 female patients among a total of 125 patients) (Table 1). The difference might be attributed to our prolonged follow-up period (5.5 years). Adalimumab dose adjustment is usually done by controlling either the first dose or the maintenance dose and the dosing intervals [33]. After considering the long half-life of this drug, extending dosing intervals might be recommended for female patients to reduce ADRs because higher concentration of adalimumab might cause higher incidence of ADRs. As skin-related ADRs and insomnia were more prevalent in female patients, it is also necessary to monitor and educate the patients on these sex-based differences.

Collectively, our findings indicate that the incidence of ADRs induced by adalimumab therapy was higher in female patients, which may have been because of the difference in mean BW (i.e., a greater proportion of female patients had a lower BW) and the features of adalimumab injectable medication. This was consistent with the reported increase in the incidence of ADRs induced by adalimumab with a decrease in BW, which occurs owing to increasing adalimumab concentrations due to the reduced elimination rate [34,35].

The following are available online at https://www.mdpi.com/2077-0383/9/2/461/s1, Table S1: Demographic characteristics of all patients administered adalimumab; Table S2: Effectiveness and ADR incidences in male or female patients sub-grouped by 50 percentile.

This research was supported by the Education and Research Encouragement Fund of Seoul National University Hospital (SGK), and in part by the Bio & Medical Technology Development Program (2015M3A9B6074045) of the National Research Foundation and the Support Program for Women in Science, Engineering and Technology through NRF (2019H1C3A 10322224) funded by the Korean government. 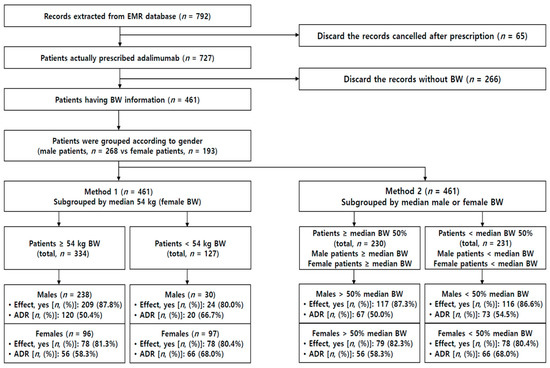