Interstitial lung disease (ILD) comprises a group of disorders that affect the lung parenchyma with varying degrees of pulmonary fibrosis. Idiopathic interstitial pneumonia, connective tissue disease (CTD)-associated ILD, sarcoidosis and chronic hypersensitivity pneumonitis represent the vast majority of ILD cases seen in the ILD clinic. When evaluating ILD patients, clinicians commonly face significant challenges in identifying the cause of progressive worsening of dyspnea, whether it is related to a progressive ILD course or is a consequence of comorbidity that worsened the natural course. For example, pulmonary hypertension (PH), defined as a mean pulmonary artery pressure (mPAP) ≥ 25 mmHg, is one of the most common comorbidities encountered in ILD patients and leads to worsening of dyspnea, decreased functional capacity, increased need for oxygen supplementation and ultimately reduced survival [1,2,3,4,5,6].
Recently, the Sixth World Symposium on Pulmonary Hypertension task force revised the definition of PH for chronic lung disease (Group 3) to mPAP > 20 mmHg with pulmonary vascular resistance (PVR) ≥ 3 Wood units (WU) [7]. However, the clinical significance and prognostic impact of changing the definition in Group 3 PH is unclear.
In this context, we reviewed a series of consecutive ILD patients evaluated in one center who underwent right heart catheterization (RHC) while applying the new PH definition to determine the physiological and hemodynamic parameters that predict survival in ILD associated PH patients. ILD patients without PH confirmed by RHC evaluated during the same time period were chosen as a control for comparison purposes.

The present study is a retrospective review of the ongoing prospective ILD and PH registry at the ILD and PH Centre at King Saud University Medical City. Consecutive ILD patients diagnosed with PH based on RHC between 1 February 2008 and 31 October 2019 were included. RHC was performed within 7 days of establishing an ILD diagnosis or during ILD follow-up when PH was suspected. RHC parameters were obtained from ILD patients in a stable condition. All PH cases presented in this study are incident cases. The study was conducted in accordance with the Declaration of Helsinki (as revised in 2013). This study was approved by the Institutional Research Board at the College of Medicine, King Saud University, Riyadh, Saudi Arabia (approval number E-20-4608). The need to obtain written informed consent was waived because of the retrospective nature of the current study.
The demographics collected included age, sex and smoking history. Physiological studies included forced vital capacity (FVC), forced expiratory volume in one second (FEV1), FEV1/FVC ratio, and diffusion capacity of the lung for carbon monoxide (DLco) [8,9,10]. In addition, 6 min walk test (6MWT) parameters, including initial and final oxygen saturation by pulse oximetry (SpO2) and 6 min walk distance (6MWD), were collected [11]. Diagnosis of idiopathic pulmonary fibrosis (IPF) and other ILD subtypes was established by a multidisciplinary approach after a thorough analysis of clinical radiological, histopathological (when available) and serological test results according to established guidelines [12,13,14,15,16,17,18,19,20,21,22]. Only sarcoidosis cases with advanced fibrocystic disease (i.e., radiographic Scadding stage 4) were included in the current study.
Patients were categorized as without PH (defined as the mPAP < 21 mmHg, or mPAP 21–24 mmHg with PVR < 3 WU), with PH (defined as mPAP 21–24 mmHg with PVR ≥ 3 WU, or mPAP 25–34 mmHg) and with severe PH (defined as mPAP ≥ 35 mmHg or mPAP ≥ 25 mmHg with low cardiac index (<2.0 L/min/m2)) as previously described [7]. PVR was calculated as the difference between mPAP and pulmonary capillary wedge pressure (PCWP) divided by the cardiac output. Patients with post-capillary PH (pulmonary capillary wedge pressure (PCWP) > 15 mmHg and PVR < 3 WU, n = 26) were excluded.

Data are presented as the means ± standard deviations or numbers (percentages), where appropriate. Between-group differences were compared using t-test, one-way analysis of variance (ANOVA), Chi-square test or Fisher’s exact test, as appropriate. Kaplan–Meier survival curves and log-rank tests were used to investigate the time from the initial diagnosis of PH to death, transplant, loss to follow-up, or end of the study period (i.e., follow-up duration). Survival status was determined by contacting the patient or was retrieved from medical records. Survival time was censored on 31 May 2020, at the time the patient underwent lung transplant, if they were lost to follow-up, or at the date of the last visit. Cox proportional hazard regression models were used to calculate hazard ratios (HR) on all-cause mortality. Univariate parameters with a p-value < 0.05 were considered for inclusion in stepwise forward multivariate Cox proportional hazards model to identify the independent predictors of mortality among the PH patients. Two-sided p values < 0.05 and 95% confidence intervals were used to report the statistical significance and precision of our results, respectively. The SPSS (Statistical Package for the Social Sciences) version 18 software package (SPSS Inc., Chicago, IL, USA) was used for all analyses.

Survival Analysis of the ILD Cohort

This study describes the PH outcomes in diverse ILD patients with variable degrees of hemodynamic derangements, which highlights a number of important issues pertaining to this serious complication. The overall survival of patients with IPF-PH was significantly worse than the survival of patients with other types of ILD with PH. Physiological (the percent of predicted FVC and DLco) and hemodynamic (systolic PAP and cardiac index) parameters were important factors independently associated with the outcome among ILD-PH patients. Unfortunately, the majority of ILD-PH patients are routinely excluded from clinical trials of PH-specific therapy. Therefore, future studies are highly needed to address the devastating complications of ILD-PH, particularly amongst those with severe PH.

This study was not externally funded.

The authors thank the Saudi Thoracic Society for their support. We are grateful to our research nurse coordinator at the ILD and PH center, PFT technicians and medical records at King Saud University medical City for their assistance and support of the present research project.

None of the authors have conflicts of interest to disclose. 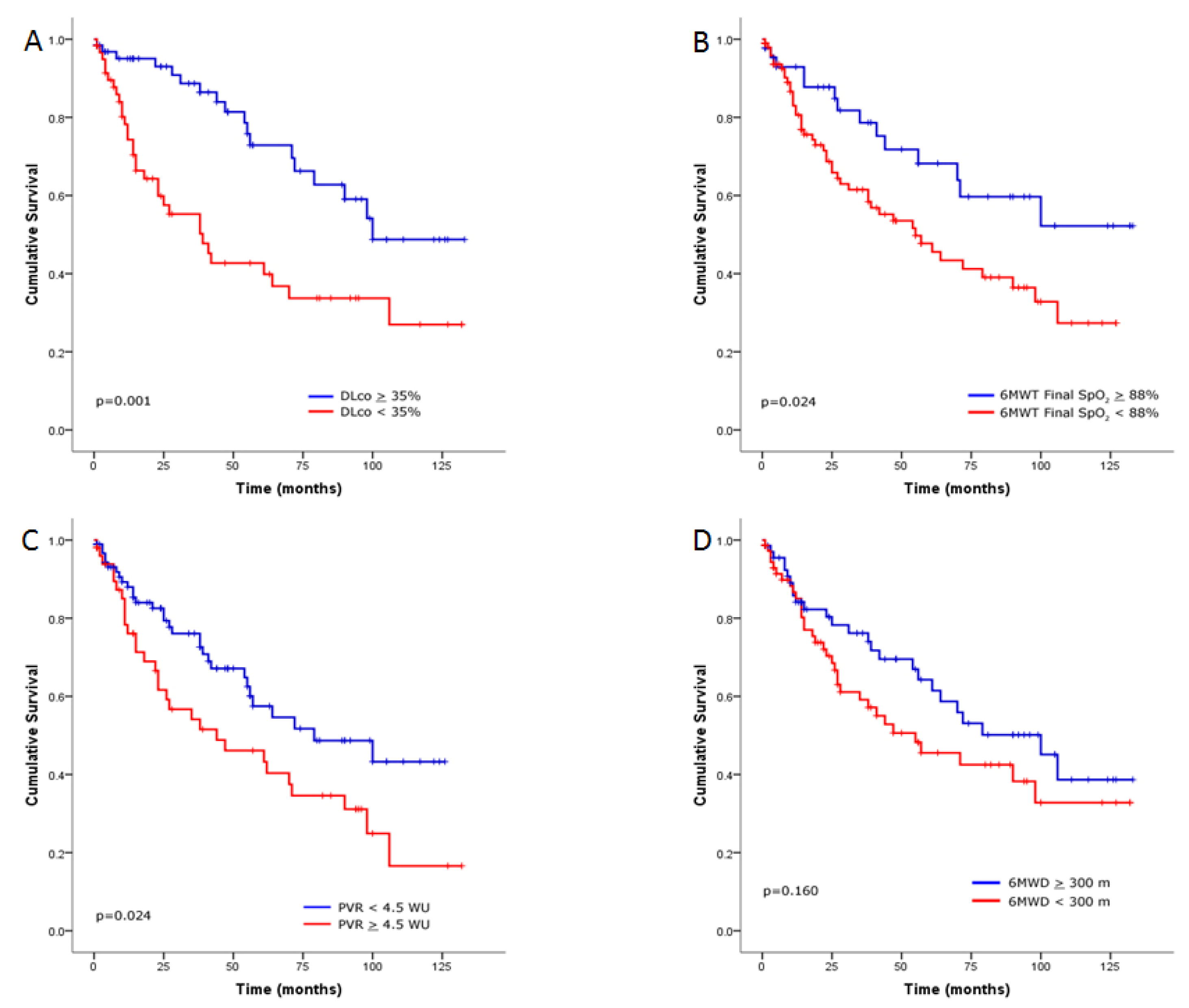