Mobile Application-Based Interventions for Chronic Pain Patients: A Systematic Review and Meta-Analysis of Effectiveness
Next Article in Special Issue

Relationship between Apical Periodontitis and Metabolic Syndrome and Cardiovascular Events: A Cross-Sectional Study

:
Background: Wolf-Hirschhorn syndrome (WHS) is a rare disease caused by deletion in the distal moiety of the short arm of chromosome 4. The objectives of this study were to report the most representative oral findings of WHS, relate them with other clinical characteristics of the disease, and establish possible phenotype-genotype correlation. Methods: The study was conducted at 6 reference centers distributed throughout Spain during 2018–2019. The study group consisted of 31 patients with WHS who underwent a standardized oral examination. Due to behavioral reasons, imaging studies were performed on only 11 of the children 6 years of age or older. All participants had previously undergone a specific medical examination for WHS, during which anatomical, functional, epilepsy-related, and genetic variables were recorded. Results: The most prevalent oral manifestations were delayed tooth eruption (74.1%), bruxism (64.5%), dental agenesis (63.6%), micrognathia (60.0%), oligodontia (45.5%), and downturned corners of the mouth (32.3%). We detected strong correlation between psychomotor delay and oligodontia (p = 0.008; Cramér’s V coefficient, 0.75). The size of the deletion was correlated in a statistically significant manner with the presence of oligodontia (p = 0.009; point-biserial correlation coefficient, 0.75). Conclusion: Certain oral manifestations prevalent in WHS can form part of the syndrome’s phenotypic variability. A number of the characteristics of WHS, such as psychomotor delay and epilepsy, are correlated with oral findings such as oligodontia and bruxism. Although most genotype-phenotype correlations are currently unknown, most of them seem to be associated with larger deletions, suggesting that some oral-facial candidate genes might be outside the critical WHS region, indicating that WHS is a contiguous gene syndrome.
Keywords:
Wolf-Hirschhorn syndrome; 4p-; stomatognathic diseases; oral manifestations; genotype

Wolf-Hirschhorn syndrome (WHS) is a developmental disorder caused by subtelomeric deletion in the distal region of the short arm of chromosome 4 (4p16.3) [1]. Chromosomal microarray techniques showed that a considerable percentage of patients have other cytogenetic aberrations in addition to deletion, such as unbalanced de novo translocations, inverted duplications, and pericentric inversions [2,3,4,5].
The disease is considered rare and has an estimated prevalence of 1/50.000 births, with a predominance among the female sex of 2:1 [6]. Although patients with WHS have fragile health for the first years of their life, their mean life expectancy is more than 30 years [7]. To date, more than 300 cases of WHS have been documented in the medical literature, which helped characterize its phenotypic spectrum [7]. An almost pathognomonic finding in these patients is the characteristic “Greek warrior helmet” facies, which consists of a prominent glabella, wide forehead, arched eyebrows, hypertelorism, exophthalmos, epicanthal folds, wide nasal bridge, large nose, short philtrum, micrognathia, and a large mouth with downturned corners (Figure 1) [8]. In addition to this unique facial phenotype, the fundamental manifestations of this polymalformative syndrome in its “classical” presentation include developmental delay, intellectual disability, and epilepsy [9].
The core WHS phenotype is due to the haploinsufficiency of several intimately related genes, which include WHSC1, WHSC2, SLBP, and LETM1 [2,3]. Subsequently, additional genes were identified of which the deletion is necessary for the phenotypic expression to be complete, which include FGFRL1, CPLX1, CTBP1 and PIGG [5,10]. A number of these genes, such as WHSC1 and FGFRL1, are considered candidates for determining the craniofacial phenotype [11,12]. Recent studies based on exome-sequence analysis confirmed that point mutations in the critical NSD2 region (WHSC1) are related to the orofacial phenotype [13] and with numerous other characteristics of the syndrome [14]. However, patients were identified with deletions in the critical WHS region (including WHSC1 and LETM1) who showed none of the characteristic facial features [15]. Correlation between genetic abnormalities and the craniofacial phenotype has, therefore, still not been definitively clarified.
Up to now, the oral manifestations of this syndrome have aroused little interest in the scientific literature. However, and paradoxically, an early and initial suspected diagnosis can be established on the basis of facial traits [16], which requires a thorough examination of the oral cavity. The most numerous series published to date on the general clinical manifestations of WHS (87 patients) indicated that approximately 50% of individuals with this disease have some type of dental abnormality [17]. Nevertheless, most of the available information in the dental literature comes from individual case studies that, in turn, were included in narrative reviews [16,18], except for a series of 7 Finnish patients with WHS in whom the genetic bases of dental agenesis were investigated [19].
The aims of this cross-sectional study were to assess the oral manifestations of WHS in a convenience sample of Spanish patients, and determine whether the oral findings were correlated with other clinical characteristics of WHS, including genotype-phenotype correlations.

Through the Spanish Wolf-Hirschhorn Syndrome Association (AESWH), we contacted the families of 45 patients with WHS during 2018–2019. The families were informed in writing about the study objectives, and their informed consent was obtained for using the clinical and photographic information. The study was conducted in accordance with the Declaration of Helsinki of the World Medical Association (2008) and approved by the Research Ethics Committee of La Paz University Hospital, Madrid, Spain (PI-2734).
All participants had previously undergone a specific and regulated medical examination for WHS, during which anatomic disorders, clinical findings/comorbidities, developmental abnormalities, and epilepsy-related data were recorded (Table S1). These variables had already been reported and employed for analyzing the Spanish-based cohort of WHS to which the patients in this study belong [4,5,20].

DNA was quantified using PicoGreen (Invitrogen Corporation, Carlsbad, CA, USA). A genomewide scan of 850,000 tag SNPs was conducted at the Medical and Molecular Genetics Institute (INGEMM) using Illumina CytoSNP-850k BeadChip according to the manufacturer’s specifications (Illumina, San Diego, CA, USA). GenCall scores < 0.15 at any locus were considered “no-calls”. Image data were analyzed using the Chromosome Viewer tool contained in Genome Studio (Illumina, San Diego CA, USA). The metric that we employed was the logR ratio, which is the log (base 2) ratio of the observed normalized R value for an SNP divided by the expected normalized R value (under the manufacturer’s specifications). In addition, allele-frequency analysis was applied to all SNPs, and genomic positions were based on GRCh37. We determined the size of the deletion and, in cases in which deletion was associated with duplication, the size of the duplication.

To facilitate their participation, we established a network of 6 reference dental centers distributed strategically throughout Spain (Seville, Madrid, Valencia, Barcelona, San Sebastián, and Santiago de Compostela). A calibration meeting was held with each center’s representatives to record, in a standardized manner, the patients’ dental history, and the results of clinical and radiological oral examination. All patients 6 years and older underwent orthopantomography; cone-beam computed tomography was requested for those patients who presented malformations of the maxillofacial bones or suspected cleft palate.
We collected the following information from each patient: degree of cooperation (based on the number of dental team members necessary to perform the oral examination); examination of the oral cavity with special emphasis on the presence of downturned corners of the mouth, abnormal frenula, cleft lip/palate, ogival palate (high and narrow palate), tooth-eruption chronology, morphological (e.g., peg-shaped teeth, microdontia), numerical (e.g., dental agenesis, oligodontia), and structural (e.g., enamel hypoplasia) tooth abnormalities, and gingival status (basic periodontal examination); intermaxillary relationships and tooth malocclusions in the sagittal, transverse, and vertical planes; and the presence of harmful habits (e.g., bruxism).

The study group consisted of 31 patients (68.8% of all AESWH members), with a mean age of 9.5 ± 3.6 years, with a predominance of the female sex (67.7%). Table 1 lists the participants’ anatomical characteristics and their clinical peculiarities/comorbidities, Table 2 describes the developmental abnormalities and epilepsy characteristics, and Table 3, Figure 2, and Table S2 show the results of the genetic study.

Considering the abovementioned limitations of this study, certain oral manifestations prevalent in WHS such as delayed tooth eruption, bruxism, tooth agenesis (especially oligodontia), and micrognathia can form part of the syndrome’s phenotypic variability. In addition, this information can be important for establishing dental requirements of these patients and their management in the dental setting. Correlation between psychomotor delay and oligodontia, and between a number of epilepsy characteristics and oral findings such as bruxism and cross-bite have not been reported to date, and represent new objectives for future investigations. The phenotype-genotype correlation of most of the oral findings is still unknown. Given the limitations of the sample size and the lack of previous publications on this issue, we cannot determine the repercussions of the additional rearrangements on the rate and nature of the syndrome’s oral manifestations. However, the strong association that we found between the size of the 4p deletion and the presence of oligodontia, and between the size of the duplications and bruxism, warrant the search for new candidate genes likely beyond the critical WHS region, which would increase the complexity of the basic genomic defect.

This study was supported by the Health Institute Carlos III (ISCIII) (FIS18/01433) by JN.

The authors would like to thank the Spanish Wolf-Hirschhorn Syndrome Association (AESWH), especially Natalia Graña and all of the patients and their families who participated in the study. 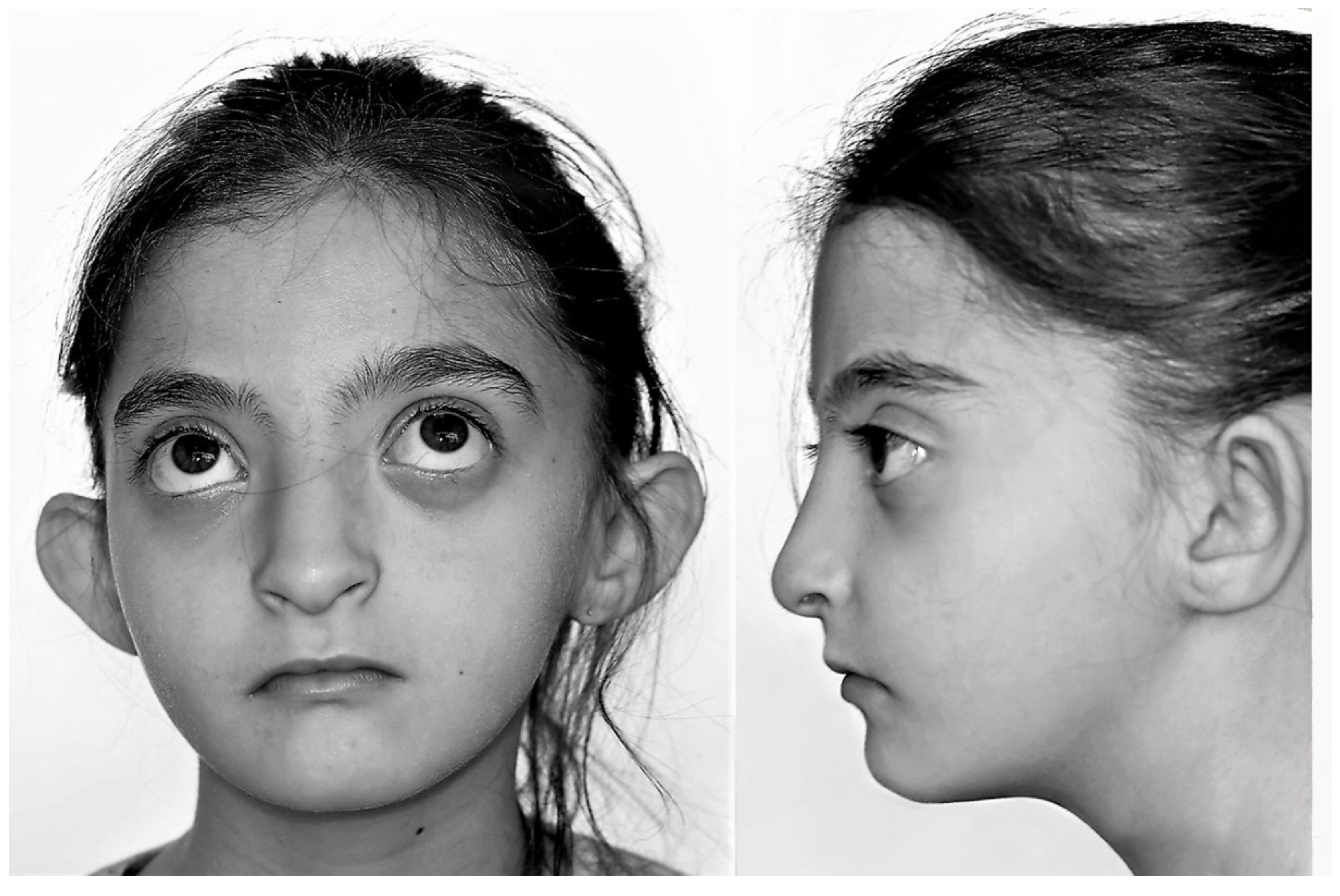 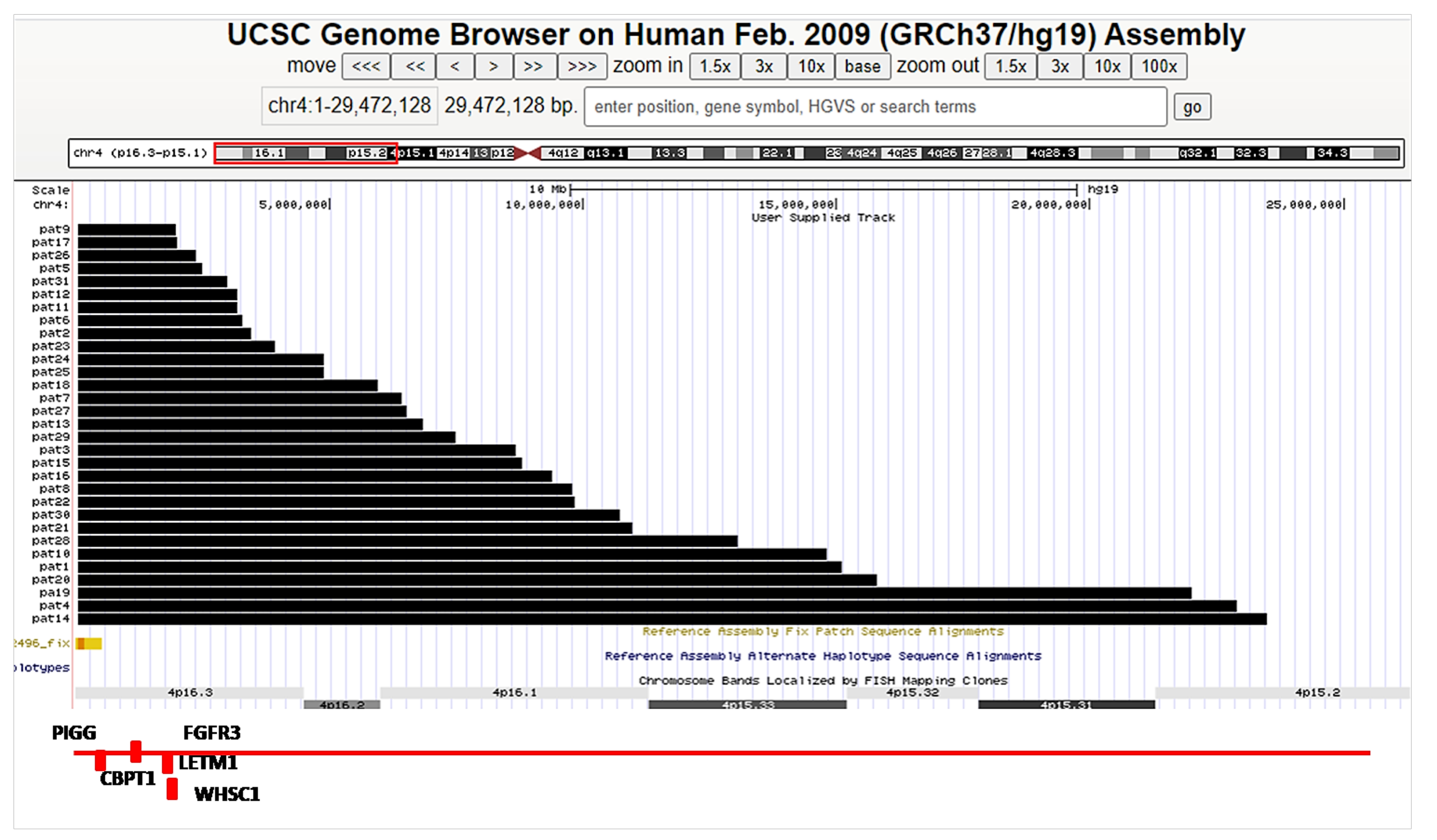