Mobile Application-Based Interventions for Chronic Pain Patients: A Systematic Review and Meta-Analysis of Effectiveness
Next Article in Special Issue

Relationship between Apical Periodontitis and Metabolic Syndrome and Cardiovascular Events: A Cross-Sectional Study

Background: Wolf-Hirschhorn syndrome (WHS) is a rare disease caused by deletion in the distal moiety of the short arm of chromosome 4. The objectives of this study were to report the most representative oral findings of WHS, relate them with other clinical characteristics of the disease, and establish possible phenotype-genotype correlation. Methods: The study was conducted at 6 reference centers distributed throughout Spain during 2018–2019. The study group consisted of 31 patients with WHS who underwent a standardized oral examination. Due to behavioral reasons, imaging studies were performed on only 11 of the children 6 years of age or older. All participants had previously undergone a specific medical examination for WHS, during which anatomical, functional, epilepsy-related, and genetic variables were recorded. Results: The most prevalent oral manifestations were delayed tooth eruption (74.1%), bruxism (64.5%), dental agenesis (63.6%), micrognathia (60.0%), oligodontia (45.5%), and downturned corners of the mouth (32.3%). We detected strong correlation between psychomotor delay and oligodontia (p = 0.008; Cramér’s V coefficient, 0.75). The size of the deletion was correlated in a statistically significant manner with the presence of oligodontia (p = 0.009; point-biserial correlation coefficient, 0.75). Conclusion: Certain oral manifestations prevalent in WHS can form part of the syndrome’s phenotypic variability. A number of the characteristics of WHS, such as psychomotor delay and epilepsy, are correlated with oral findings such as oligodontia and bruxism. Although most genotype-phenotype correlations are currently unknown, most of them seem to be associated with larger deletions, suggesting that some oral-facial candidate genes might be outside the critical WHS region, indicating that WHS is a contiguous gene syndrome. View Full-Text
Keywords: Wolf-Hirschhorn syndrome; 4p-; stomatognathic diseases; oral manifestations; genotype Wolf-Hirschhorn syndrome; 4p-; stomatognathic diseases; oral manifestations; genotype
►▼ Show Figures 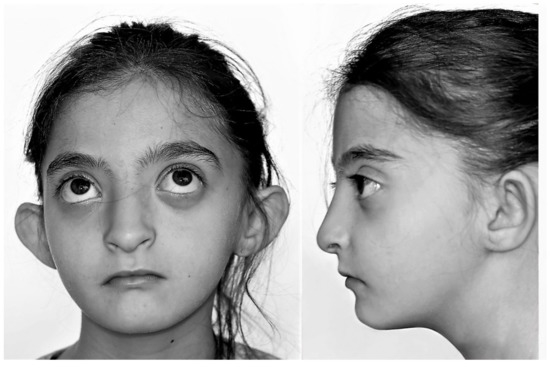