Exercise and Horticultural Programs for Older Adults with Depressive Symptoms and Memory Problems: A Randomized Controlled Trial
Next Article in Special Issue

The Equivalence between Virtual and Real Feared Stimuli in a Phobic Adult Sample: A Neuroimaging Study

We combined virtual reality and multisensory bodily illusion with the aim to characterize and reduce the perceptual (body overestimation) and the cognitive-emotional (body dissatisfaction) components of body image distortion (BID) in anorexia nervosa (AN). For each participant (20 anorexics, 20 healthy controls) we built personalized avatars that reproduced their own body size, shape, and verisimilar increases and losses of their original weight. Body overestimation and dissatisfaction were measured by asking participants to choose the avatar that best resembled their real and ideal body. Results show higher body dissatisfaction in AN, caused by the desire of a thinner body, and no body-size overestimation. Interpersonal multisensory stimulation (IMS) was then applied on the avatar reproducing participant’s perceived body, and on the two avatars which reproduced increases and losses of 15% of it, all presented with a first-person perspective (1PP). Embodiment was stronger after synchronous IMS in both groups, but did not reduce BID in participants with AN. Interestingly, anorexics reported more negative emotions after embodying the fattest avatar, which scaled with symptoms severity. Overall, our findings suggest that the cognitive-emotional, more than the perceptual component of BID is severely altered in AN and that perspective (1PP vs. 3PP) from which a body is evaluated may play a crucial role. Future research and clinical trials might take advantage of virtual reality to reduce the emotional distress related to body dissatisfaction. View Full-Text
Keywords: anorexia nervosa; body image distortion; body dissatisfaction; embodiment; virtual reality; interpersonal multisensory stimulation anorexia nervosa; body image distortion; body dissatisfaction; embodiment; virtual reality; interpersonal multisensory stimulation
►▼ Show Figures 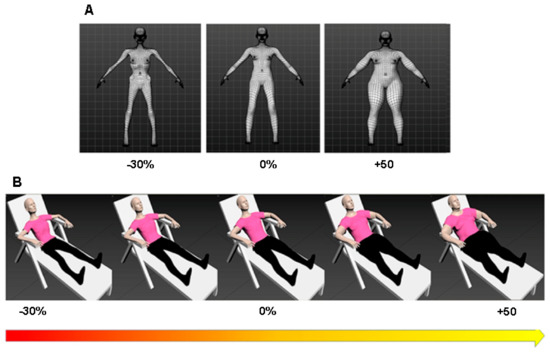