What Are the Most Effective Behavioural Strategies in Changing Postpartum Women’s Physical Activity and Healthy Eating Behaviours? A Systematic Review and Meta-Analysis
Next Article in Special Issue

Is Complete Re-Osseointegration of an Infected Dental Implant Possible? Histologic Results of a Dog Study: A Short Communication
Previous Article in Special Issue

Clinical and Ultrasound Thyroid Nodule Characteristics and Their Association with Cytological and Histopathological Outcomes: A Retrospective Multicenter Study in High-Resolution Thyroid Nodule Clinics

Due to the widespread use of ultrasound, small thyroid nodules (TNs) ≤ 10 mm are common findings. Standardized approaches for the risk stratification of TNs with Thyroid Imaging Reporting and Data Systems (TIRADS) were evaluated for the clinical routine. With TIRADS, the risk of malignancy in TNs is calculated by scoring the number or combination of suspicious ultrasound features, leading to recommendations for further diagnostic steps. However, there are only scarce data on the performance of TIRADS for small TNs. The aim was to compare three different TIRADS for risk stratification of small TNs in routine clinical practice. We conducted a retrospective cohort analysis of TNs ≤ 10 mm and their available histology. Nodules were classified according to three different TIRADS. In the study, 140 patients (n = 113 female) with 145 thyroid nodules (n = 76 malignant) were included. Most of the malignant nodules were papillary carcinoma (97%), and the remaining 3% were medullary carcinoma. For all tested TIRADS, the prevalence of malignancy rose with increasing category levels. The highest negative predictive value was found for ACR TI-RADS and the highest positive predictive value for Kwak-TIRADS. All tested variants of TIRADS showed comparable diagnostic performance for the risk stratification of small TNs. TIRADS seems to be a promising tool to reliably assess the risk of malignancy of small TNs. View Full-Text
Keywords: TIRADS; small thyroid nodules; thyroid carcinomas; risk stratification TIRADS; small thyroid nodules; thyroid carcinomas; risk stratification
►▼ Show Figures 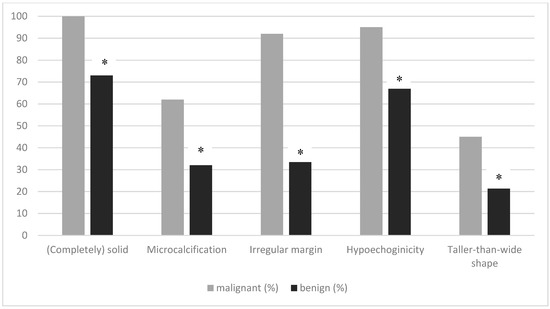