:
Early neurological assessment in infants with hypoxic ischemic encephalopathy (HIE) treated with hypothermia has not been systematically explored. The aims of the present study were to assess whether the Hammersmith Infant Neurological Examination (HINE) is a good tool to predict later neurodevelopmental outcomes at 2 year from birth in this population of infants. A total of 41 term born infants with HIE treated with hypothermia performed the HINE at 12 months and a neurodevelopmental assessment at 24 months. All the infants who had a global HINE score between 67 and 78 were able to walk independently at 2 years and reported a normal developmental quotient; language disorders were observed in a limited number of infants. HINE scores <67 were always associated with motor impairment. In conclusion, the HINE confirms its role as one of the early neurological examination tools for the diagnosis of high risk infants, even in infants with HIE treated with hypothermia. These results can be useful for clinicians involved in the follow up of these infants for early identification of motor disabilities and in planning appropriate intervention.
Keywords:
hypoxic ischemic encephalopathy; hypothermia; Hammersmith Infant Neurological Examination; outcome

Neonatal hypoxic ischemic encephalopathy (HIE) remains one of the leading causes of newborn mortality and long term disability worldwide, as it occurs in 3–5 out of 1000 live births [1,2,3]. In the last 20 years, therapeutic hypothermia (TH) has been used to treat newborns with HIE and it is now considered to be the standard of care for this population of neonates [1,2,3]; although several randomized controlled trials have demonstrated the efficacy of TH in the reduction in the risk of death or disability at pre-school and school age, a quote of 30–50% of these neonates still suffer major disabilities [1,4,5,6]. The possibility to determine which patients are at highest risk of neurological impairment is limited [6,7] and most of the neurophysiological tests used to assess prognosis had a good power prediction in term of normal/abnormal outcome only, but did not add information on the prognosis in term of type and severity of the functional motor outcome; furthermore, some of these tests, such as comprehensive neurophysiological assessment and neuroimaging, may be limited to specialist centers [7].
Neurological assessment is one of the clinical tools used to monitor development in infants that are at risk of developing neurodevelopmental disabilities [8,9]. In recent years, the Hammersmith Infant Neurological Examination (HINE) has been identified as one of of the best and simplest neurological examinations for the early diagnosis of neurological impairment in both low and high-risk infants, as it can even be easily performed by inexperienced staff [8,9,10,11]. The assessment includes several aspects of neurological functions, including cranial nerve assessment, posture, movements, tone, reflexes, and behavior, and it also provides additional information on the type and severity of the overall disability, which is not limited to motor impairment [9].
In infants with HIE, this neurologic examination provided additional prognostic information on the severity of the functional motor outcome at 2 and 4 years, showing a good correlation with the MRI performed during the neonatal period [12]. However, the role of the HINE infants with HIE in the hypothermia era has not been systematically investigated. This data could be of interest to identify those infants at risk of neuromotor impairment and to start an early rehabilitation program.
The aims of the present study was therefore to test the hypothesis that the HINE could be used to predict later neurodevelopmental outcomes at 2 year from birth in newborns with HIE treated with TH.

The infants described in this study were part of a cohort of term infants who were born with perinatal hypoxic-ischemic brain injury and admitted to the Neonatal Unit of the Fondazione Policlinico Gemelli between January 2015 and June 2017 and consecutively enrolled in a follow-up prospective research program.
For the purpose of this study, infants with ≥36 weeks gestation, with signs of encephalopathy after 10 min after birth but before 6 h, were recruited if they had one of the following signs suggesting intrapartum hypoxia: (i) a pH ≤ 7.0 or a base deficit ≥16 mmoL/L in the first hour of life on cord or infant arterial blood, or (ii) An abnormal intra-partum course (e.g., abnormal fetal heart rate, cord prolapse, uterine rupture, maternal haemorrhage/trauma/seizures/cardiorespiratory arrest; shoulder dystocia; meconium-stained liquor or prolonged second stage) and either a 10 min Apgar score ≤5 or continued respiratory support at 10 min.
Once these criteria were met, all infants underwent a standardized neurologic examination [1,13]. Infants were candidates for the study when encephalopathy or seizures were present. The encephalopathy was graded as mild (hyperalert, normal tone and activity, exaggerated moro, normal autonomic function), moderate (lethargic, decreased activity, distil flexion, hypotonia, weak primitive reflexes, constricted pupils, bradycardia or periodic breathing), or severe (stupor/coma, decerebrate posture, absent spontaneous activity, flaccid, absent primitive reflexes, non-reactive pupils or apnoea). The grade with the most corresponding signs was assigned but if signs were equally distributed, the grade was based on the level of consciousness. Infants with seizures were graded as “moderate” unless severe signs predominated. These assessments were performed within 1 h.
Exclusion criteria were a completely normal neurological exam; inability to enrol at ≤6 h of age; major congenital abnormality, cerebral malformations; neonatal abstinence syndrome; metabolic encephalopathies; a severe growth restriction (birth weight of ≤1800 g); refusal of consent by a parent; moribund infants for whom no further aggressive treatment was planned also were excluded.
Parental permission was obtained in all cases.
All the infant who met the inclusion criteria and a moderate or severe encephalopathy underwent TH according to the international guideline for 72 h [1]. During TH, infants received routine clinical care, including the monitoring of vital signs and surveillance for organ dysfunction.
A magnetic resonance imaging (MRI) was performed in all the newborns between days 7 to 14 after birth.

The Hammersmith Infant Neurological Examination (HINE) was performed at 12 months [9]. An optimality score was obtained by calculating the distribution of the frequency of the scores in the normal population, defining as optimal all the scores found in at least 90% of the cohort. The overall score ranges from a minimum of 0 to a maximum of 78. At 9 and 12 months, a score ≥73 is regarded as optimal, while <73 is sub-optimal [9].
A further neurodevelopmental assessment was performed at 2 years; it included a structured neurological examination according to Touwen [14] and a developmental assessment, using the Griffiths Scale of Mental Development [15]. The scale includes five subscales (locomotor, personal–social, hearing and speech, hand and eye co-ordination, and performance) and, for the children older than two, an additional subscale assessing practical reasoning. One of the advantages of this test is that it provides not only a global developmental quotient (DQ) but also subquotients for the individual subscales, allowing us to obtain a profile of abilities in the individual subscales. Results were classified as normal when the DQ were 85 or above, borderline if falling between 84 and 70 and abnormal below 70.
Cerebral palsy, if present, was classified according to the criteria proposed by Himmelmann et al. [16].
The Ethical Committee of our Institution approved the study.

The anthropometric variables (weight and gestational age) and HINE scores were reported as median and range. In order to explore the possible influence of gender on birth-weight, gestational age, HINE scores and DQ on Griffitth’ scales, differences in sub-scores and global scores between male and female were analysed by the Mann-Whitney test. Statistical analysis was performed using the “Stata Statistical Software: Release 10” (StataCorp LP, College Station, TX, USA). The level of significance was set at p < 0.01.

A total of 48 infants were eligible for the study. Seven of them (one deceased during the neonatal period) did not attend one or more of the assessments and were therefore excluded. Forty-one infants represented the final population (12 females, 29 males) with a median birth-weight of 3190 g (range 2040–5000 gr) and a median gestational age of 39 weeks (range 36–41 weeks). There was no difference between males and females on birth-weight or gestational age (p > 0.05).
All the infants performed a MRI scan during the neonatal period (range 7–14 days; median 10 days after birth) with a similar distribution of normal/abnormal scans between males and females. A total of 23 of the 41 infants had normal scans (7 females, 16 males). Of the 18/41 infants with abnormal scans, 8 had minimal basal ganglia and thalami lesions (1 females, 7 males), 4 had moderate white matter lesions (1 female, 3 males), 3 had moderate white matter and basal ganglia and thalami (1 female, 2 males), while 3 had severe basal ganglia and thalami with diffuse white matter (2 females, 1 male).

Thirty-six infants were neurologically normal, 1 had a diplegia, 2 had quadriplegia, and 2 had quadriplegia with dystonia. Thirty-seven of the 41 infants were able to walk independently. The remaining 4 infants showed severely limited self-mobility and unsupported sitting.
The global DQ of the Griffitths scale was >85 in 37 infants and was abnormal (<70) in the other 4. No difference was found between males and females on global DQ (p > 0.05). In the 37 infants with normal DQ, 7 reported a borderline DQ in the hearing and speech subscale (1 female, 6 males), 4 an abnormal DQ in the hearing and speech subscale (4 males), 1 a borderline DQ in the locomotor subscale (1 female) and 1 a border DQ in the personal–social subscale (1 male). 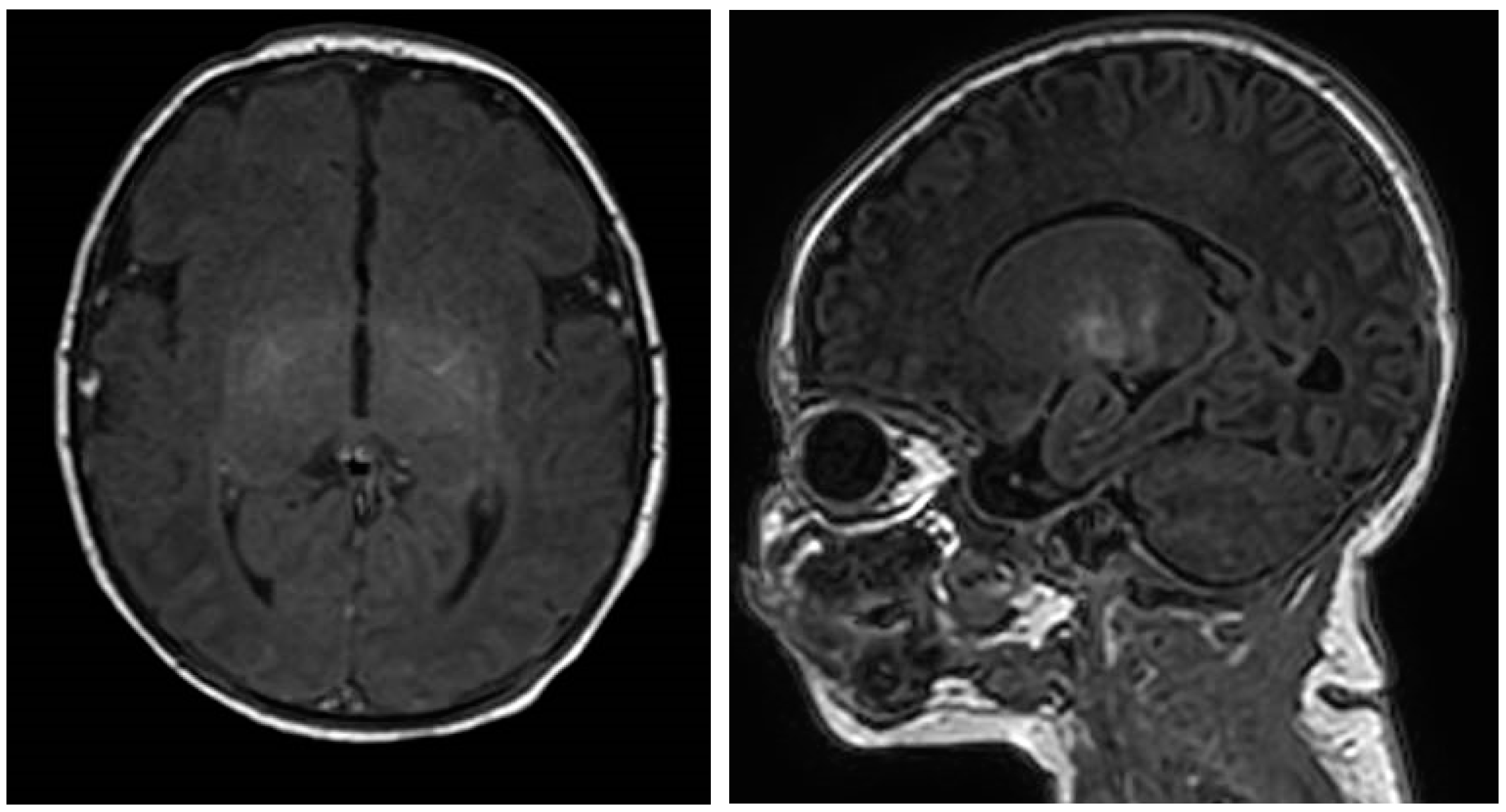